You are here: Home › economics › Nicole Oresme – Polymath of the Late Middle Ages 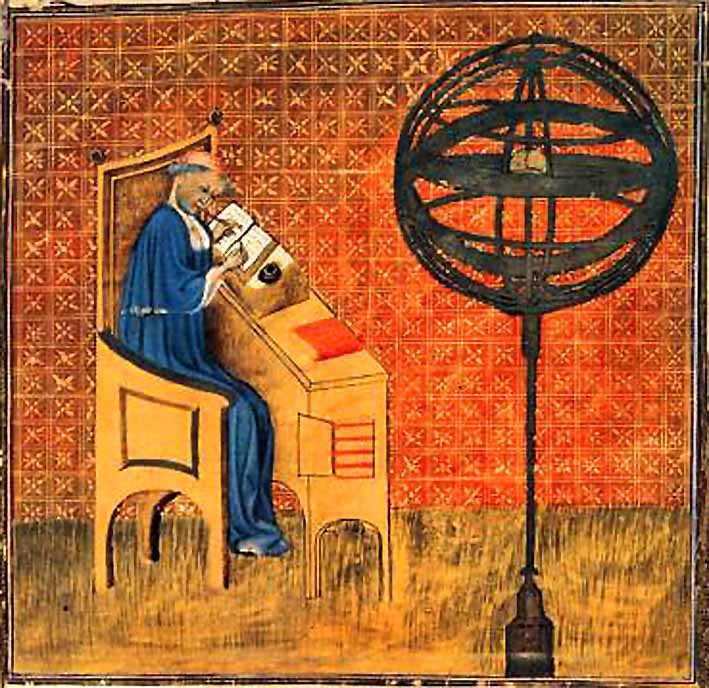 On July 11, 1382, significant philosopher of the later Middle Ages Nicole Oresme passed away. As for many historic people of the middle ages, his actual birthdate is unknown and can only be fixed to a period between 1325 and 1330. Nicole Oresme besides William of Ockham [7] or Jean Buridan — a French priest who sowed the seeds of the Copernican revolution in Europe [6] — is considered as one of the most influential thinkers of the 14th century and he wrote influential works on economics, mathematics, physics, astrology and astronomy, philosophy, and theology. Besides his duties as clergyman and counselor of the king, he was very much interested in natural scientific problems. He was a decisive and eager opponent of astrology, which he attacked on religious and scientific grounds. Moreover, he also was a gifted teacher, who was able to communicate science to his contemporaries in a popular way.

“God in His infinite grandeur without any quantity and absolutely indivisible, which we call immensity, is necessarily all in every extension or space or place which exists or can be imagined.”
– Nicole Oresme, Le livre du ciel et du monde (1377), Book II, Ch. 2, p. 279.

We do not know much about Nicole Oresme’s life. He was born c. 1320-1325 in the village of Allemagne in the vicinity of Caen, Normandy, in the diocese of Bayeux. Practically nothing is known concerning his family. The fact that Oresme attended the royally sponsored and subsidized College of Navarre, an institution for students too poor to pay their expenses while studying at the University of Paris, makes it probable that he came from a peasant family. Oresme studied the “artes” in Paris, together with Jean Buridan, and there received the Magister Artium. Buridan was a philosopher and logician who made contributions to probability, optics and mechanics. He added to Aristotle’s theory of motion by understanding that motion was retarded by resistance from the air. Buridan had a major influence in interesting Oresme in natural philosophy and in encouraging him to question the ideas of Aristotle. [3]

Oresme was already a regent master in arts by 1342 and was probably teaching philosophy, during the crisis over William of Ockham‘s natural philosophy. In 1348, he was a student of theology in Paris, in 1356, he received his doctorate and in the same year he became grand master of the College of Navarre. Oresme held this position till 1362 and was teaching master in the faculty of theology during that time.[1] In 1364 he was appointed dean of the Cathedral of Rouen. The following year he took on the additional duties of canon at the Sainte-Chapelle in Paris. Around 1369 he began a series of translations of Aristotelian works at the request of Charles V, for whom he already served, when Charles was the dauphin of France, who granted him a pension in 1371. From 1370 he lived mainly in Paris, advising Charles on financial matters.[3] The friendship between Charles and Oresme was one which continued throughout their lives.[3] At Charles’s instance, too, Oresme pronounced a discourse before the papal court at Avignon, denouncing the ecclesiastical disorders of the time. Furthermore, with royal support, Oresme was appointed bishop of Lisieux in 1377, where he passed away in 1382.

“The heavenly bodies move with such regularity, orderliness, and symmetry that it is truly a marvel; and they continue always to act in this manner ceaselessly, following the established system, without increasing or reducing speed and continuing without respite, as the Scripture says: Summer and winter, night and day they never rest.”
– Nicole Oresme,Le livre du ciel et du monde (1377), Book II, Ch. 2, p. 283.

Nicole Oresme is best known as an economist, mathematician, and a physicist. His economic views are contained in a Commentary on the Ethics of Aristotle and a “Treatise on Coins“. These writings are considered among the earliest manuscripts devoted to an economic matter and account Oresme as the precursor of the science of political economy. In the middle ages, at a time when Aristotle’s ideas were accepted almost without question, Oresme did indeed question them. He rejected Aristotle’s definition of time, which was based on uniform motion, and proposed an original definition independent of motion. Similarly he rejected Aristotle’s definition of the position of a body, which was the boundary of the surrounding space, and replaced it with a definition in terms of the space which the body occupies.

“Since money belongs to the community … it would seem that the community may control it as it wills, and therefore may make as much profit from alteration as it likes, and treat money as its own property.”
– Nicole Oresme, Traictie de la Première Invention des Monnoies (1355), Ch. 22: Whether the community may alter money.

A Precursor of Descartes

In mathematics, Oresme invented a type of coordinate geometry before René Descartes, finding the logical equivalence between tabulating values and graphing them in his manuscript De configurationibus qualitatum et motuum. He proposed the use of a graph for plotting a variable magnitude whose value depends on another variable. His attempt to apply mathematical concepts to scientific phenomena was groundbreaking. In particular, he applied his new approach to the following problem: the question of whether a litre of hot water is “warmer” than five litres of lukewarm water. Oresme presents both facts as two rectangles with different abscissa (here: water quantity) or ordinate (here: temperature) and solves the problem by comparing the areas. He is not interested in concrete measurements or comparisons, but rather in the basic solution.Oresme was also the first to prove Merton’s theorem, namely that the distance travelled in a fixed time by a body moving under uniform acceleration is the same as if the body moved at a uniform speed equal to its speed at the midpoint of the time period. 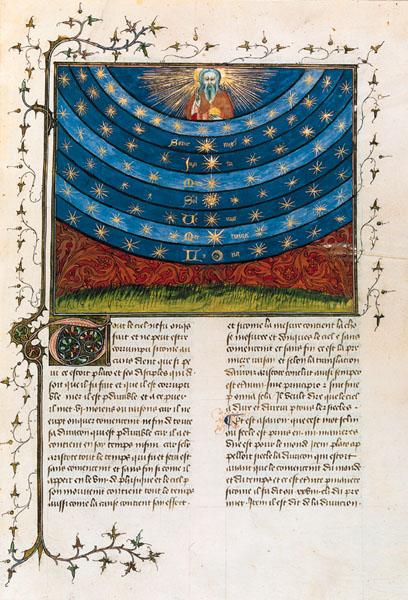 Also he anticipated the Copernican heliocentric model of the solar system. In his “Livre du ciel et du monde” Oresme discussed a range of evidence for and against the daily rotation of the Earth on its axis. From astronomical considerations, he maintained that if the Earth were moving and not the celestial spheres, all the movements that we see in the heavens that are computed by the astronomers would appear exactly the same as if the spheres were rotating around the Earth. He rejected the physical argument that if the Earth were moving the air would be left behind causing a great wind from east to west. However, in the end he refused his own argument. He concluded that none of his arguments were conclusive and “everyone maintains, and I think myself, that the heavens do move and not the Earth.“

Oresme provided the first modern vernacular translations of Aristotle’s moral works that are still extant today. Between 1371 and 1377 he translated Aristotle’s Ethics, Politics and Economics (nowadays considered to be pseudo-Aristotelian) into Middle French. He also extensively commented on these texts, thereby expressing some of his political views. Like his predecessors Albert the Great,[9] Thomas Aquinas [10] and Peter of Auvergne (and quite unlike Aristotle), Oresme favours monarchy as the best form of government. His criterium for good government is the common good. A king (by definition good) takes care of the common good, whereas a tyrant works for his own profit. A monarch can ensure the stability and durability of his reign by letting the people participate in government.

At yovisto academic video search, you can learn more about the work of Nicole Oresme as a mathematician in the lecture of Prof. John D. Borrow from Gresham College on ‘Maths with Pictures‘. There, Prof. Borrow speaks about the use of illustrations in ancient mathematics books, the invention of the first graphs and also the representation of probabilities.