You are here: Home › space › To Jupiter and Beyond – The Pioneer 10 Mission 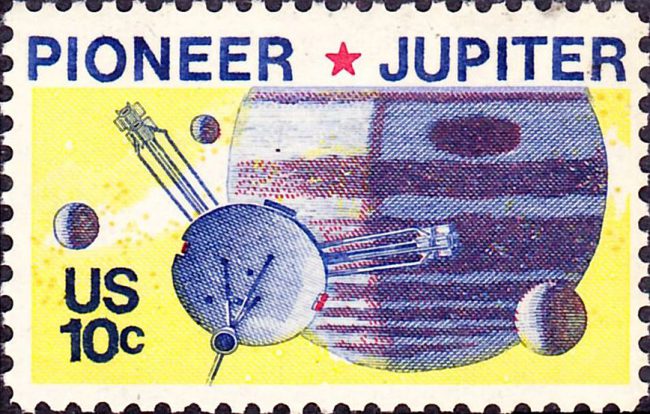 US stamp with Pioneer 10 Jupiter Mission, 1975, US Post Office; Bureau of Engraving and Printing

On March 2, 1972, American space probe Pioneer 10 was launched. Pioneer 10 was the first spaceprobe that completed the first mission to the planet Jupiter. Thereafter, Pioneer 10 became the first of five artificial objects to achieve the escape velocity needed to leave the Solar System. As a child, I remember how much i was impressed and amazed by the very first pictures of the colorful clouds of the gas giant. Having already witnessed the Apollo missions, of course every child of my generation wanted to become an astronaut. Thus, the Pioneer mission further stimulated our imagination what would be the next steps in manned space flight.

In the 1960s, American aerospace engineer Gary Flandro of the NASA Jet Propulsion Laboratory conceived of a mission, known as the Planetary Grand Tour, that would exploit a rare alignment of the outer planets of the Solar System. This mission would ultimately be accomplished in the late 1970s by the two Voyager probes, but in order to prepare for it, NASA decided in 1964 to experiment with launching a pair of probes to the outer Solar System. For a potential mission to the outer planets Jupiter was of special interest, because it was recognized that its strong gravity could be used to greatly accelerate space probes without fuel expenditure by means of the so-called swing-by.[1] NASA approved a program for two identical probes in February 1969. These were assigned to the Pioneer series. The program was managed by the Pioneer Project Office at Ames Research Center, and the probes were to be developed and constructed by TRW. There is an optimum launch window to Jupiter every 13 months, and so the first probe was to be launched in February or March 1972, the second 13 months later.

The mission objectives of the Pioneer probes focused on the area beyond Mars. For example, the asteroid belt was to be scientifically explored and at the same time its hazardousness for spacecraft was to be determined. The interplanetary medium between Mars and Jupiter was also of great scientific interest. Finally, Jupiter itself was to be intensively studied. The Pioneer probes required the highest speed ever achieved by a man-made object up to that time. Therefore, the most powerful launch vehicle available at the time, an Atlas rocket with a Centaur upper stage, was chosen. Since the thrust was still not sufficient, a third solid rocket stage was integrated to achieve the necessary speed of over 14.3 km/s. More than 150 scientific experiments were proposed for the missions. The experiments to be carried on the spacecraft were selected in a series of planning sessions during the 1960s, then were finalized by early 1970.

Pioneer 10 was built primarily of aluminum and weighed 258 kg at launch, with 28 kg of hydrazine propellant for attitude control. The central part of the spacecraft consists of a hexagonal ring that houses most of the electronics and was made of aluminum in sandwich honeycomb core construction. The hexagon has a depth of 25.5 cm and a side length of 71 cm. The eye-catching parabolic antenna with a diameter of 2.74 m is located on top. Three booms are symmetrically attached to the central part. Two of them carry two radionuclide batteries each at a distance of three meters to reduce interference from their radiation. The HVM instrument is located on the third boom, which is 6.6 meters long. In the center of the ring is a heated spherical tank with a diameter of 42 cm for the hydrazine. Pioneer 10 was the first spacecraft to draw its power exclusively from a thermoelectric radionuclide battery. This innovation was necessary because solar radiation at Jupiter is 27 times less than at Earth, making solar cells impractical due to the required area of about 23 m². Pioneer 10’s four batteries are filled with the isotope plutonium-238, which has a half-life of 87.7 years and emits alpha radiation during decay. This radiation releases large amounts of heat (temperature typically several hundred degrees Celsius). This heat is converted directly into electrical energy using 90 thermocouples per battery.

Communication was primarily via the large high-gain antenna, which has a diameter of 2.74 m and an aperture angle of 3.3°. It achieved an antenna gain of 38 dB. With this, a transmission rate of 2 kbit/s was achieved in the asteroid belt and 1 kbit/s at Jupiter. The reception rate was very low at Jupiter with only one bit per second. Pioneer 10, like earlier space probes, has hardly any automatic control systems and thus had to be constantly supplied with commands from the ground station. There are a total of 222 commands, of which 73 are for science instrument control and 149 are for spacecraft control. Each command is 22 bits long, which meant that the transmission took 22 seconds when the probe was in the area of Jupiter. However, for some situations where several commands had to be executed in rapid succession, this data rate was not sufficient. Therefore, a memory was installed that could store up to five commands. To determine the position of the probe, three star sensors are used, two of which target the sun and one Canopus as guide stars. If one of the two stars moves out of the sensors’ field of view, a position correction is initiated. 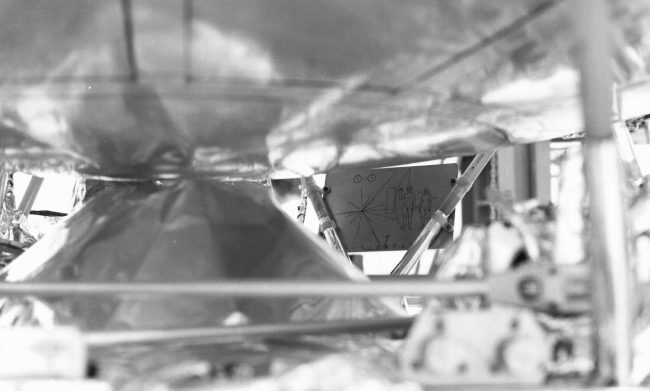 The Pioneer plaques were placed on board the 1972 Pioneer 10 and 1973 Pioneer 11 spacecraft, featuring a pictorial message, in case either Pioneer 10 or 11 is intercepted by intelligent extraterrestrial life.

The Pioneer 10 plaque is intended as an information carrier for aliens who might find the probe. It measures 22.9 cm in width and 15.2 cm in height. The base material is a 1.2 mm thick aluminum plate coated with gold for corrosion protection. Primary image elements are a man and a woman, each unclothed, and the silhouette of the spaceship to allow for size comparison. The position of the Earth is indicated relative to fourteen pulsars. Furthermore, the solar system and a hyperfine structure transition of a hydrogen atom are shown.

Through the Asteroid Belt

Pioneer 10 achieved important scientific results early on. For example, the zodiacal light could be detected for the first time from far beyond the Earth. In August 1972, a solar storm occurred, which Pioneer 9 and 10 were able to observe and measure simultaneously. In February 1973, the probe became the first man-made object to reach the asteroid belt. One entered absolutely new territory, already particles with a diameter of 0.05 mm could damage the probe seriously. At that time it was assumed that the asteroid belt could make an advance towards Jupiter impossible. However, it turned out that this assumption was completely exaggerated. Thus one could exclude the asteroid belt as serious danger for later spaceships practically. During the whole way to Jupiter about 16,000 commands were sent to the probe. 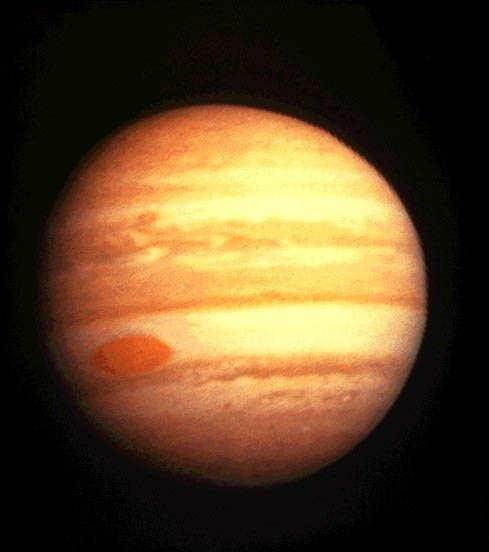 In November 1973, Pioneer 10 reached the Jupiter system [4] when it crossed the orbit of the outermost moon known at that time, Sinope. The closest approach to Jupiter occurred on December 3, 1973. Then, on December 1, the spacecraft was finally within the magnetic field of Jupiter, which was 3.5 million kilometers away. It now began taking photos 95 hours before its closest approach. Because of the camera’s large field of view, the planet was not format-filled until eight hours before closest approach. Seventy-four hours after the closest approach, IPP operations ceased, taking 180 images. On December 3, 1973, some commands did not arrive at Pioneer 10 because of the strong radiation, which resulted in the IPP not photographing the moon Io. During the passage of the radiation belt, the probe received a radiation dose 1000 times higher than the dose lethal to humans. Nevertheless, one image each of the moons Ganymede, Europa and Callisto was taken. Due to the almost completely manual control of the probe, 400 to 2000 commands per day were sent in the Jupiter system.

In 1976 Pioneer 10 passed the orbit of Saturn, in 1979 that of Uranus and in 1983 that of Neptune. However, exploration of these planets was not possible or planned because they were far from the probe’s orbit. Pioneer 10 remained the farthest man-made object from Earth until February 17, 1998. The Voyager 1 probe, launched in 1977, has been at a greater distance from Earth since then, thanks to its higher speed. While Pioneer 10 was not designed for use beyond Jupiter’s orbit, its instruments for measuring radiation and ions were generally suitable for analyzing interplanetary space as well.[2,3] The low energy level of the probe soon became problematic, as the output power of the radionuclide batteries continuously decreased, which is why more and more scientific instruments had to be switched off over time.

To save money, Pioneer 10 was officially written off on March 31, 1997, although it was still functional. However, it was always possible to withdraw funds from other projects in order to make contact with the probe from time to time. On February 10, 2000, Pioneer was able to receive a command for the last time (the spacecraft reported successful reception), as increasing distance caused reception strength to drop below a critical level. On April 27, 2002, usable data was received from the spacecraft for the last time. The last identifiable signal was received on January 23, 2003, at the next planned contact on February 7, no signal could be detected by the probe and so the mission ended after 31 years at a distance of about 81 AU (about 12 billion kilometers). Since then, the spacecraft has been moving approximately in the direction of the star Aldebaran, 67 light-years away in the constellation of Taurus, whose current position it will reach in about 2 million years.