You are here: Home › astronomy › Voyager and the Exploration of Saturn 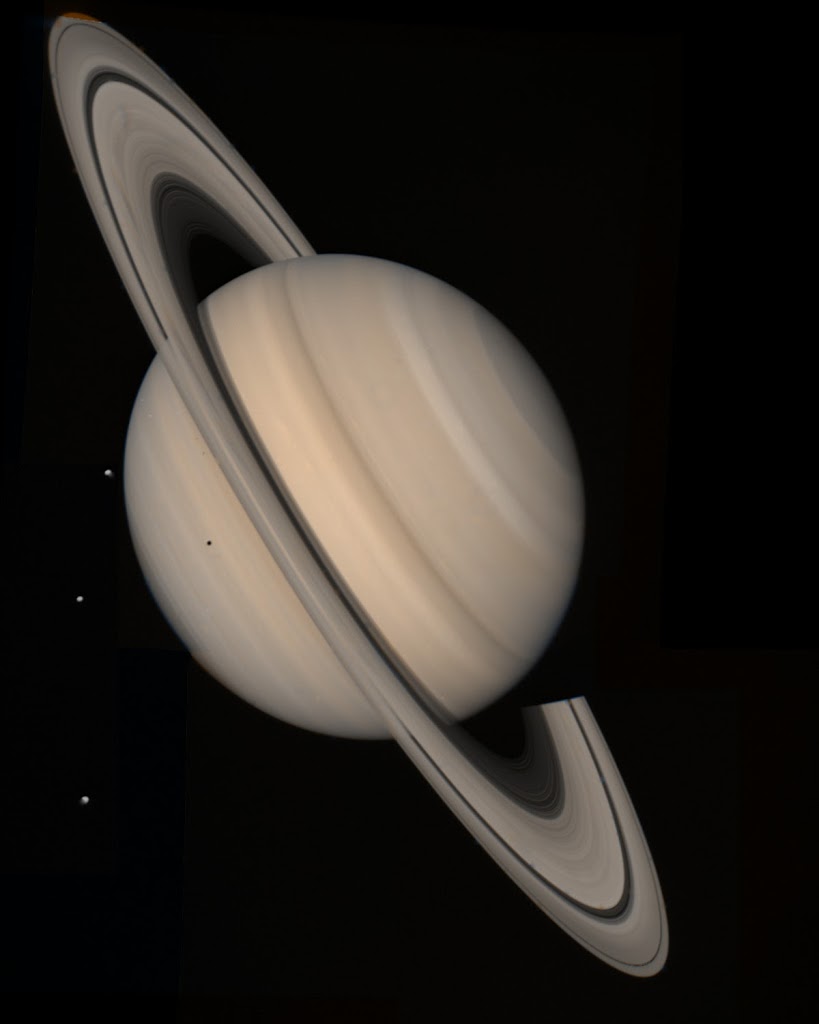 On August 25, 1981, American space probe Voyager 2 passed Saturn and transmitted stunning pictures of the ring planet. The space probe had been launched by NASA on August 20, 1977 to study the outer Solar System and eventually to push forward into interstellar space. Until today, operating for more than 30 years the spacecraft still receives routine commands and transmits data back to the Deep Space Network, a world-wide network of large antennas and communication facilities. Besides its passage of the Saturnian System, Voyager had already passed the Jovian system including Jupiter’s moons, and continued its journey encountering also the Uranian system in 1986, and the Neptunian system in 1989, after which the primary mission of Voyager 2 ended December 31, 1989. We already have dedicated an article to Voyager’s passage of Jupiter and the Jupiter moons. [3] But, today’s article will focus on Saturn, the most extraordinary planet of our solar system.

Saturn is the sixth planet from the Sun and the second largest planet in the Solar System, after Jupiter, and is named after the Roman God of agriculture. Saturn is a gas giant with an average radius about nine times that of Earth. While only one-eighth the average density of Earth, with its larger volume Saturn is just over 95 times more massive than Earth. Saturn has a prominent ring system that consists of nine continuous main rings and three discontinuous arcs, composed mostly of ice particles with a smaller amount of rocky debris and dust. Known since prehistoric times, Saturn was the most distant of the five known planets in the solar system in ancient time. To discover Saturn’s rings it requires at least a 15-mm-diameter telescope. In 1610, the Italian mathematician, physicist and astronomer Galileo Galilei [3] sent Johannes Kepler [11] the anagram:

to secure the priority of a discovery without having to reveal it already. When Galileo was sure of his observations, he also revealed the solution. It reads:

Shortly before, Galileo had observed Saturn for the first time through one of the first telescopes and believed to see roundish bulges on both sides of Saturn’s disk. In 1612, however, Galileo could only see Saturn’s disk itself, believed himself to have been mistaken in his earlier observations and did not pursue the strange matter any further. Since in that year the ring was in edge position, it was indeed not visible to the telescopes of that time. Other astronomers such as Fontana, Gassendi, Hevelius, Riccioli or Grimaldi were also only able to determine the presence of the appendages in the following decades, but were unable to explain the phenomenon and its occasional disappearance.

Only after Christiaan Huygens [5] had been able to observe the ring on 25th December, the ring was no longer visible. Only after Christiaan Huygens had discovered a moon (Titan) on March 25, 1655, thanks to improved homemade telescopes, and had followed it over several months, did the associated systematic observation of the planet lead him to the conviction, published in 1659, that Saturn was surrounded by a free-floating ring, and that its shape, which was always perceived differently, was explained by the different inclinations with which it presented itself to the observer during Saturn’s orbit. Huygens determined the inclination of the ring against the ecliptic to 31° and the node length to 169½°. Giovanni Domenico Cassini discovered 1671 Saturn’s moon Iapetus, 1672 Rhea, 1684 Dione and Tethys. Cassini also described the division in Saturn’s rings named after him in 1675. The noticeable flattening of Saturn had already been measured by Grimaldi as 1/12, but it was only William Herschel who succeeded in determining the duration of rotation in 1790; he received 10h 16m, which corresponded well with the flattening. Herschel had also discovered the two moons Mimas and Enceladus in 1789. The eighth moon, Hyperion, was found by Bond and Lassell in 1848 at about the same time 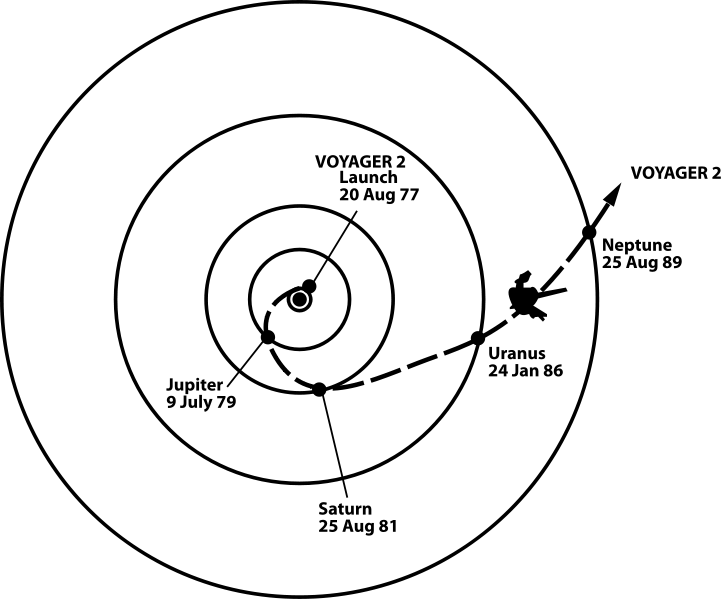 Photographs of the Saturn System

The first human built spaceprobe that pushed forward to Saturn was the Pioneer 11 flyby in September 1979. Pioneer 11 passed within 20,000 km of the planet’s cloud tops. Images were taken of the planet and a few of its moons, although their resolution was too low to recognize any surface detail. In November 1980, the Voyager 1 probe visited the Saturn system. It sent back the first high-resolution images of the planet, its rings and satellites. Voyager 1 also performed a close flyby of Titan, increasing knowledge of the atmosphere of the moon. Almost a year later, in August 1981, Voyager 2 continued the study of the Saturn system. More close-up images of Saturn’s moons were acquired, as well as evidence of changes in the atmosphere and the rings. Unfortunately, during the flyby, the probe’s turnable camera platform stuck for a couple of days and some planned imaging was lost. Actually, this put plans to officially extend the mission to Uranus and Neptune in jeopardy, but fortunately the mission’s engineers were able to fix the problem.

Voyager 2 found that at the uppermost pressure levels (seven kilopascals of pressure), Saturn’s temperature was 70 kelvins (-203 °C), while at the deepest levels measured (120 kilopascals) the temperature increased to 143 K (-130 °C). The north pole was found to be 10 kelvins cooler, although this may be seasonal. Moreover, The Voyager discovered and confirmed several new satellites orbiting near or within the planet’s rings, and also discovered the small Maxwell and Keeler gaps in the rings. Finally, Saturn’s gravity was used to direct the spacecraft’s trajectory towards Uranus.

The exploration of the Saturnian system did not end with Voyager 2. On July 1, 2004, the Cassini–Huygens spacecraft performed the SOI (Saturn Orbit Insertion) maneuver and entered into orbit around Saturn. Besides more in depth data about Saturn and its satellites, Huygens descended onto the surface of the Saturn moon Titan on January 14, 2005, sending a flood of data during the atmospheric descent and after the landing, while the Cassini part remained in orbit and gathered further data on Saturn, its rings and its satellites.

At yovisto academic video search you might learn more about the Voyager space program and the discovery of our outer solar system in a NASA special space science presentation on ‘Voyager – Humanity’s Farthest Journey‘.