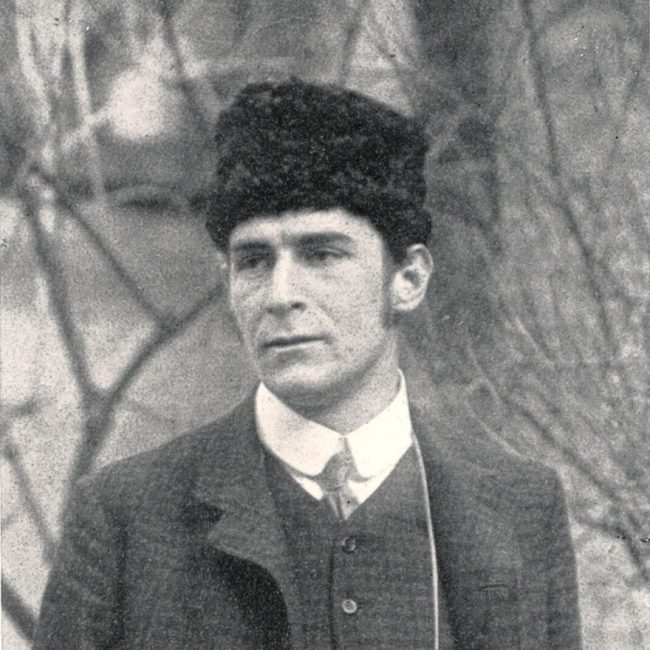 On February 8, 1880, German painter and printmaker Franz Marc was born. Franz Marc is one of the key figures of German Expressionism. He was a founding member of Der Blaue Reiter (The Blue Rider), a journal whose name later became synonymous with the circle of artists collaborating in it.

“Art is nothing but the expression of our dream; the more we surrender to it the closer we get to the inner truth of things, our dream-life, the true life that scorns questions and does not see them.”
— Franz Marc, 1907

Franz Marc was born as the second and last son of the Marc family in Munich, Germany. His father Wilhelm Marc, who had completed a law degree before studying painting at the Academy of Fine Arts in Munich, was a landscape and genre painter. His mother Sophie, née Maurice, came from Alsace and had worked as an educator in the family of her later husband. Wilhelm and Sophie Marc had married late. Franz and his older brother Paul Marc, grew up bilingual.  Both brothers attended the Luitpold-Gymnasium in Munich, where Albert Einstein was a classmate at times. As an 18-year-old pupil Franz Marc dealt with literature and philosophy, in particular with the works of Thomas Carlyle and Friedrich Nietzsche.[1] In 1899 Franz Marc graduated from the Luitpold-Gymnasium.

In 1899 Marc rejected the idea of a spiritual profession and enrolled in a philology course at the Ludwig Maximilian University in Munich. In October of the same year, before beginning his studies, he began his one-year military service in Lagerlechfeld near Augsburg and learned to ride horses. During this time he decided to take up his father’s profession. In October 1900 he enrolled at the Munich Art Academy. In May 1903 he travelled through France with his fellow student Friedrich Lauer, who had sufficient funds. He studied the sights and bought Japanese woodcuts from Flammarion, whose technique and composition were said to have impressed him greatly. After returning to Munich at the beginning of September of the same year, Marc left the Academy of Fine Arts disappointed by his academic studies.

In February 1905, Franz Marc met art student Maria Franck at a Schwabing costume festival, however they lost their way again. In 1907, Franz Marc married eleven years older Marie Schnür. However the couple already divorced only after a year. In February 1910 Franz Marc had his first solo exhibition at the art dealer Brakl, which included 31 paintings as well as gouaches and lithographs. In 1911 Marc refused a renewed request for a dispensation for a marriage with Maria Franck, which is why both travelled to London at the beginning of June to enter into a marriage under English law, but according to Maria Marc they were unable to do so. Nevertheless, from then on they publicly described themselves as a married couple.

Secession and the Blue Rider

Franz Marc met Wassily Kandinsky [2] and Gabriele Münter in 1911. In the autumn of 1911, the tensions between the conservative members of the Neue Künstlervereinigung München (N.K.V.M.) and Kandinsky’s group intensified, leading to a scandal on December 2 with regard to the painting Composition V/Judgement Day by Kandinsky, which had been rejected by the jury because of its oversize. On the same day Wassily Kandinsky, Gabriele Münter, Franz Marc and Alfred Kubin resigned. Kandinsky and Franz Marc established a forum they called “Der Blaue Reiter” (The Blue Rider), with the purpose to organise exhibitions as well as a publishing platform.  On December 18, 1911 the “First exhibition of the editorial staff ‘Der Blaue Reiter” was opened in the Galerie Thannhauser. 14 artists were represented at the first exhibition, in addition to Marc and Kandinsky artists such as the brothers Burljuk, Heinrich Campendonk, Robert Delaunay, Jean-Bloé Niestlé, Elisabeth Epstein, August Macke, Gabriele Münter, Henri Rousseau and Arnold Schönberg. The exhibition then went on tour to other cities, such as Cologne in the Gereonsklub and Berlin in Herwarth Walden’s gallery Der Sturm. Further stops until 1914 included Bremen, Hagen, Frankfurt, Hamburg, Budapest, Oslo, Helsinki, Trondheim and Gothenburg. 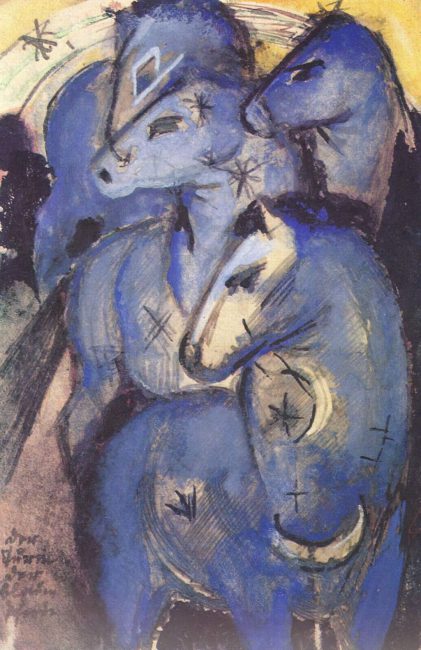 The Apex of Expressionism

As it was the apex of the German expressionist movement, the exhibit also showed in Berlin, Cologne, Hagen, and Frankfurt. In 1912, Marc met Robert Delaunay, whose use of color and the futurist method was a major influence on Marc’s work; fascinated by futurism and cubism, Marc created art that increasingly was stark and abstract in nature. He painted The Tiger and Red Deer in 1912 and The Tower of Blue Horses, Foxes, and Fate of the Animals in 1913

With the outbreak of World War I in 1914, Marc was drafted into the German Army as a cavalryman. By February 1916, as shown in a letter to his wife, he had gravitated to military camouflage. His technique for hiding artillery from aerial observation was to paint canvas covers in broadly pointillist style. He took pleasure in creating a series of nine such tarpaulin covers in styles varying “from Manet to Kandinsky”, suspecting that the latter could be the most effective against aircraft flying at 2000 meters or higher. After mobilization of the German Army, the government identified notable artists to be withdrawn from combat for their own safety. Marc was on the list but was struck in the head and killed instantly by a shell splinter during the Battle of Verdun in 1916 before orders for reassignment could reach him. 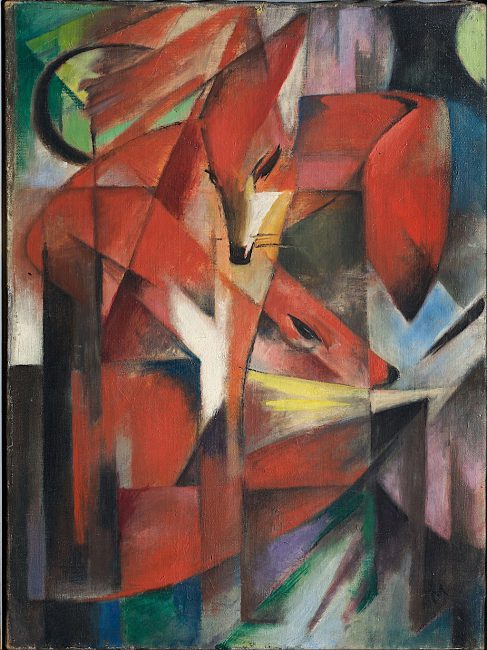 Marc made some sixty prints in woodcut and lithography. Most of his mature work portrays animals, usually in natural settings. His work is characterized by bright primary color, an almost cubist portrayal of animals, stark simplicity and a profound sense of emotion. Even in his own time, his work attracted notice in influential circles. Marc gave an emotional meaning or purpose to the colors he used in his work: blue was used to portray masculinity and spirituality, yellow represented feminine joy, and red encased the sound of violence.