You are here: Home › art › Paul Cézanne – Breaking all the Rules 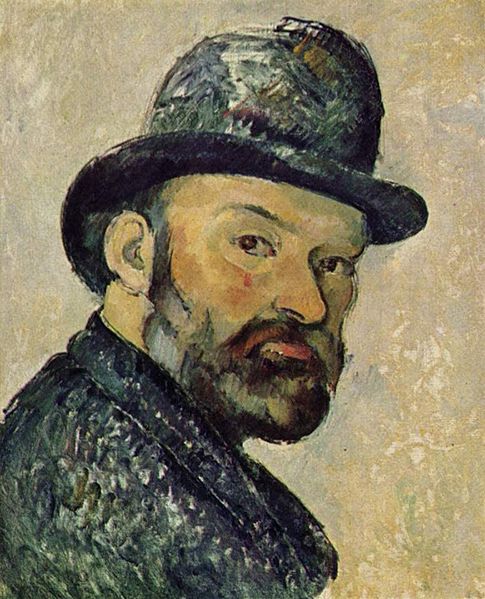 On January 19, 1839, French artist and Post-Impressionist painter Paul Cézanne was born. He laid the foundations of the transition from the 19th-century conception of artistic endeavour to a new and radically different world of art in the 20th century. Thus, Cézanne can be said to bridge between late 19th-century Impressionism and the early 20th century’s Cubism.

“Painting from nature is not copying the object, it is realizing sensations.”,
Joachim Gasquet’s Cézanne, – a Memoir with Conversations, (1897 – 1906)

Paul Cézanne was born in Aix-en-Provence, France, and attended the Collége Bourbon along with the writer-to-be Èmile Zola [8] and the prospective engineer Baptistin Baille, who he evolved a great friendship with, discovering the works of Homer, Vergil and discussing various arts together. As his father wished, Cézanne began to study law to be able to take over his fathers bank ‘Cézanne & Cabassol’, but also increased his interest as well as his abilities in drawing and poetry writing while secretly taking lessons at the Free Municipal School of Drawing in Aix, where he studied drawing under Joseph Gibert, a Spanish monk. However, the bank prospered throughout the artist’s life, affording him financial security that was unavailable to most of his contemporaries and eventually resulting in a large inheritance. Going against the objections of his banker father, he committed himself to pursuing his artistic development and left Aix for Paris.

Not Following the Classic Style

After a disappointing beginning in Paris around the year 1858 and a return to his home town, Cézanne gave it another try and in 1861 enrolled into the ‘Académie Suisse’ getting to know Pissarro, Claude Monet[9], and Alfred Sisley. Cézanne’s early work is often concerned with the figure in the landscape and includes many paintings of groups of large, heavy figures in the landscape, imaginatively painted. Later in his career, he became more interested in working from direct observation and gradually developed a light, airy painting style. Nevertheless, in Cézanne’s mature work there is the development of a solidified, almost architectural style of painting. Against the prevailing artistic trends, Cézanne favored realistic paintings, influenced by Gustave Courbet.[10] Due to these facts, the young artist was not allowed to exhibit his works in 1863 at the famous ‘Salon de Paris’ why Napoleon III evolved the ‘Salon des Refusés‘ for artists like him not following the classical style of Ingres [5]. Representative works of this so called ‘dark-period’ depict ‘The Murder‘ or ‘The Rape‘.

In the early 1870’s, Cézanne followed Camille Pissarro’s invitation to Pontiose, where the friend convinced him to use brighter colors and also showed him several new techniques, which led Cézanne to impressionism. Important in this decisive period Cézanne’s was ‘Jas de Bouffan‘ from 1876. When Claude Monet planned his own exhibition, he wanted to support the young impressionists, whose works were not welcome in the ‘Salon de Paris’, Cézanne also presented his paintings but was instead mocked by critics and further artists. Paul Cézanne was far from being accepted in the artist community and found himself in financial difficulties in the 1880’s, when he began working in Marseille and creating his first works anticipating cubism. Before 1895 Cézanne exhibited twice with the Impressionists (at the first Impressionist exhibition in 1874 and the third Impressionist exhibition in 1877).

“Colour is the place where our brain and the universe meet. That’s why colour appears so entirely dramatic, to true painters.”,  Joachim Gasquet’s Cézanne, – a Memoir with Conversations, (1897 – 1906)

The first upheaval came in 1895, when the gallery owning Ambroise Vollard supported Cézanne with his first solo exhibition, where he was able to sell several works and his reputation as well as his financial situation began to rapidly increase. Cézanne was interested in the simplification of naturally occurring forms to their geometric essentials: he wanted to “treat nature by the cylinder, the sphere, the cone” (a tree trunk may be conceived of as a cylinder, an apple or orange a sphere, for example). Additionally, Cézanne’s desire to capture the truth of perception led him to explore binocular vision graphically, rendering slightly different, yet simultaneous visual perceptions of the same phenomena to provide the viewer with an aesthetic experience of depth different from those of earlier ideals of perspective, in particular single-point perspective.

Cézanne concentrated on a few subjects and was equally proficient in each of these genres: still lifes, portraits, landscapes and studies of bathers. For the last, Cézanne was compelled to design from his imagination, due to a lack of available nude models. Like the landscapes, his portraits were drawn from that which was familiar, so that not only his wife and son but local peasants, children and his art dealer served as subjects. His still lifes are at once decorative in design, painted with thick, flat surfaces, yet with a weight reminiscent of Gustave Courbet. 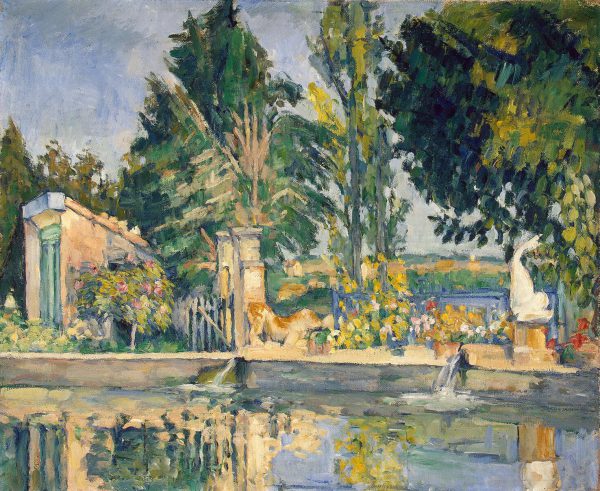 One day, Cézanne was caught in a storm while working in the field. After working for two hours he decided to go home; but on the way he collapsed. He was taken home by a passing driver. His old housekeeper rubbed his arms and legs to restore the circulation; as a result, he regained consciousness. On the following day, he intended to continue working, but later on he fainted; the model with whom he was working called for help; he was put to bed, and he never left it. Paul Cézanne died a few days later, on 22 October 1906.

In 2007, his paintings were honored in an entire exhibition dedicated to Cézanne as a fore thinker of modern painting and an early influencer of cubism. He was able to inspire, Picasso, Braque, and Gris to find new ways of experimenting with complex perspectives and forms. Both Matisse and Picasso are said to have remarked that Cézanne “is the father of us all.” [11]