You are here: Home › history › J’Accuse – Émile Zola and the Dreyfus Affaire 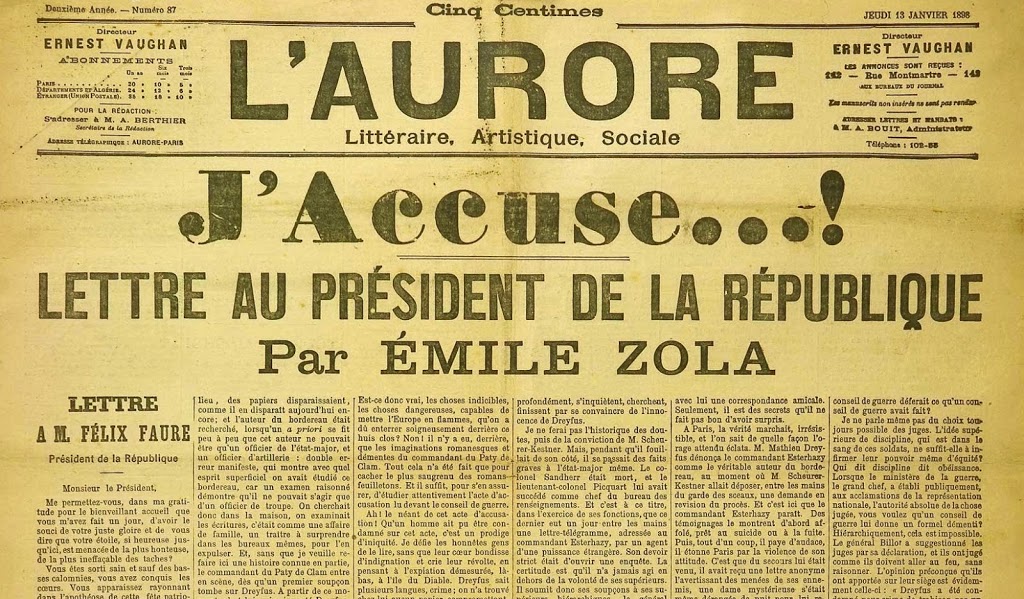 On January 13, 1898, French novelist Émile Zola published an open letter in the newspaper L’Aurore entitled “J’accuse” (“I accuse”, or, in context, “I accuse you”). In the letter, Zola addressed the President of France Félix Faure, and accused the government of anti-Semitism and the unlawful jailing of Alfred Dreyfus, a French Army General Staff officer sentenced to penal servitude for life for espionage.

Alfred Dreyfus was born in 1859 in the city of Mulhouse, which was then located in the province of Alsace in northeast France. Born into a wealthy Jewish family he left his native town for Paris in 1871 after the annexation of the province Alsace by Germany following the Franco-Prussian War. In 1894, while an artillery captain for the General Staff of France, Dreyfus was suspected of providing secret military information to the German government. A cleaning woman and French spy working at the German Embassy was at the source of the investigation. She routinely searched wastebaskets and mailboxes at the German Embassy for interesting documents and found a suspicious bordereau (i.e. a detailed listing of documents) that she delivered to Commandant Hubert-Joseph Henry, member of the General Staff in the French military counterintelligence.

The bordereau had been torn into six pieces, and had been found in the wastepaper basket of the German military attaché Maximilian von Schwartzkoppen. In the course of the investigation, Dreyfus was convicted largely on the basis of testimony by professional handwriting experts: the graphologists’ assertion was that “the lack of resemblance between Dreyfus’ writing and that of the bordereau was proof of a ‘self-forgery,’ and prepared a fantastically detailed diagram to demonstrate that this was so.” In addition, there were assertions from military officers who provided confidential evidence. Dreyfus was found guilty of treason in a secret military court-martial, during which he was denied the right to examine the evidence against him. The Army stripped him of his rank in a humiliating ceremony and shipped him off to Devil’s Island, a penal colony located off the coast of French Guiana in South America. 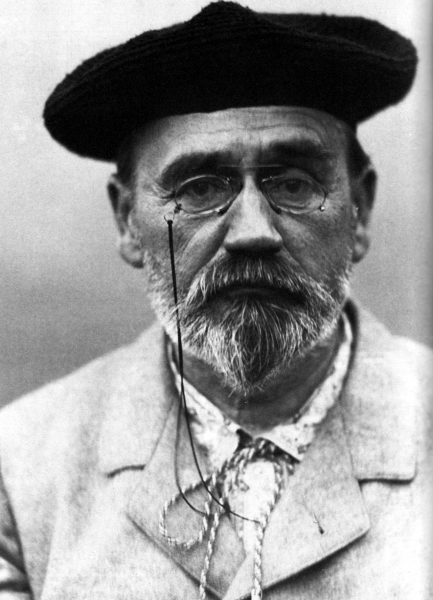 At this time France was experiencing a period of anti-Semitism, and there were very few outside his family who defended Dreyfus. The author Émile Zola was born on April 2, 1840 in Paris. More than half of Zola’s novels were part of a set of 20 collectively known as Les Rougon-Macquart. Unlike Balzac, who in the midst of his literary career resynthesized his work into La Comédie Humaine[7], Zola from the start, at the age of 28, had thought of the complete layout of the series. Set in France’s Second Empire, the series traces the “environmental” influences of violence, alcohol, and prostitution which became more prevalent during the second wave of the Industrial Revolution. The series examines two branches of a family—the respectable (that is, legitimate) Rougons and the disreputable (illegitimate) Macquarts – for five generations. Zola was among the strongest proponents of the French Third Republic and was elected to the Légion d’honneur. He risked his entire career in January 1898 when he decided to stand up for Alfred Dreyfus. He wrote an open letter to the President of France, Félix Faure, accusing the French government of falsely convicting Alfred Dreyfus and of antisemitism. His intention was to draw the accusation so broadly that he would essentially force men in the government to sue him for libel.

Once the suit was filed, the supporters of Dreyfus would have the opportunity to acquire and publicize the shaky evidence on which Dreyfus had been convicted. Zola titled his letter “J’accuse”, which was published on the front page of the liberal Paris daily L’Aurore. In effect, Zola was brought to trial for libel for publishing his letter to the President, and was convicted two weeks later. He was sentenced to jail and was removed from the Légion d’honneur. To avoid jail time, Zola fled to England, and stayed there until the French Government collapsed while he continued to defend Dreyfus. Already in 1899, Alfred Dreyfus was able to return to France for a retrial, but although found guilty again, he was pardoned. In 1906, Dreyfus appealed his case again, to obtain the annulment of his guilty verdict. Finally, he was also awarded the Cross of the Légion d’honneur, which stated, “a soldier who has endured an unparallelled martyrdom.”

Zola’s 1898 article is widely marked in France as the most prominent manifestation of the new power of the intellectuals in shaping public opinion, the media and the state. Émile Zola died on 29 September 1902 of carbon monoxide poisoning caused by an improperly ventilated chimney.