You are here: Home › engineering › The Russian Dream to Land a Man on the Moon 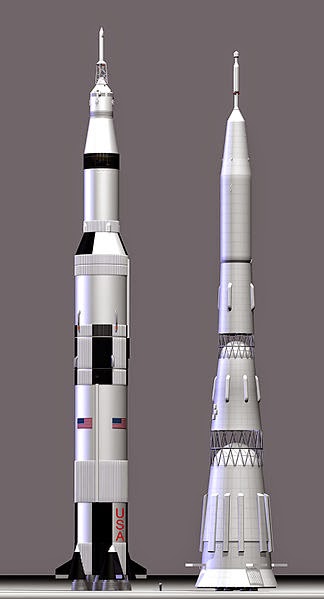 On July 3, 1969, the biggest explosion in the history of rocketry occurred when the Soviet N-1 rocket exploded and subsequently destroyed its launchpad. After four unsuccessful launch tries of the Soviet counterpart to the NASA Saturn V rocket the Russian Moon program was cancelled in May 1974.

Sergei Pavlovich Korolev, the leading Soviet space craft designer and rocket engineer, also known as the father of practical astronautics started directing the development of the N1 rocket. Soviet engineers set high goals. It was intended to build a  manned lunar carrier rocket and while the N1 was the largest of all three proposed designs, it was still a ‘paper project’ in the 1950’s. Korolev was able to prevail against two prominent engineers named Vladimir Chelomey and Mikhail Yangel and was enabled a decent funding to design and develop the N1. In 1961, the design was discussed and the first test launch was set for 1965. In May 1962 the unusual conical design with spherical tanks of a three-stage N1 was completed. It was to have a starting mass of 2200 tons and a payload of 75 tons for the near-earth range. The project was confirmed by the Soviet government on September 24, 1962 and the deadline for completion was set at three years. There were 500 organizations from 26 ministries involved in the project, which later led to difficulties in the project organization due to lack of cooperation and coordination and competition.

The N1 was over 100 metres high and among the world’s largest launch vehicles with a total wight of 2,788 metric tons. During the process of development, a whole series of engines was installed, one more powerful and efficient than the other. NASA’s Saturn V rocket was just a little bigger and not as slender as N1. Also Saturn V was built not as wide as N1 at the base and had just slightly a better overall performance than N1. Also, the Soviet Union used kerosine fuel in all of its stages due to their lack of experience with liquid hydrogen. The NASA in comparison was comfortable to use the more efficient liquid hydrogen on all upper stages of Saturn, reducing the overall weight and increasing the payload fraction.

The development of the required powerful rocket engines proved to be problematic. Korolev’s previous engine development partner for the OKB-1, Valentin Petrovich Glushko‘s OKB-456, now worked closely with Vladimir Chelomei’s competing OKB-52 design office.[5] Korolev and Gluschko had hopelessly disagreed, among other things, about the engine design (single-chamber versus four-chamber engine) and the fuel combination to be used (RP-1/oxygen versus UDMH/dinitrogen tetroxide). Korolyov therefore cooperated with Nikolai Kuznetsov’s OKB-276, which until then had mainly developed air jet engines and propeller turbines – including the world’s largest propeller turbine engine NK-12 with about 11,000 kW (15,000 HP). Due to the lack of experience with large rocket engines until then, the development of the engines was subject to considerable delays.

A Series of Problems

During construction, several issues appeared and with the given amount of funding, lots of problems stayed. Therefore, no successful flight of the rocket could be completed. In February 1969, during a launch, a pipe broke and a fire started. It reached the control system as 68,7 seconds in the flight wherefore all engines had to be shut down. Still, the rocket exploded at 12200 m altitude. In July 1969, about 6 seconds after liftoff, a loose bolt was detected. It was ingested into an oxygen pump which quickly exploded. The automatic engine control shut off 29 out of 30 engines on board and the rocket began to stall. Just 23 seconds after shutting of the engines, the rocket exploded, destroying itself as well as its launch tower. This was the largest non nuclear explosion in human history and because NASA feared a moon rocket built by the Soviet’s, they had photographed the event with American satellites. After the explosion, further testing dates were delayed, because the launch pad was critically demolished.

The End of the Program

After this catastrophe, two further tests were scheduled. In 1971 the vehicle was destroyed almost a minute after liftoff and during the very last launch in 1972 the engines cut off at 40km altitude the vehicle disintegrated.Vasily Mishin continued work on the N1 in the hope of using it, among other things, as a launch vehicle for transporting a manned space station comparable to the US Skylab. However, the entire N1 programme was finally terminated in 1974, after the ZKBEM (formerly OKB-1) was merged into the RKK Energija production association under the leadership of Valentin Gluschko on 22 May 1974.

At yovisto, you may enjoy a lecture by Dr. Wessley Huntress on Soviet Robotic Lunar and Planetary Exploration at NASA.