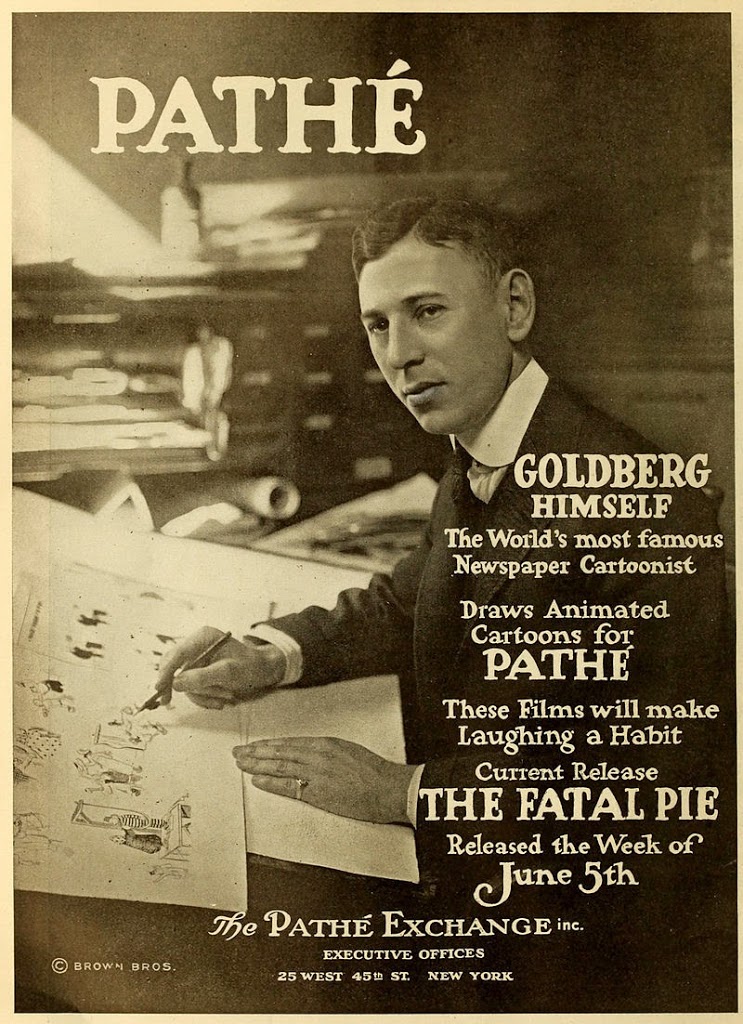 On July 4, 1883, American cartoonist, sculptor, author, engineer and inventor Reuben Garrett Lucius “Rube” Goldberg was born. He is best known for a series of popular cartoons depicting complicated gadgets that perform simple tasks in indirect, convoluted ways. Goldberg received many honors in his lifetime, including a Pulitzer Prize for his political cartooning in 1948.

From the Sewer Department to a Newspaper

Reuben Lucius Goldberg was born July 4, 1883, in San Francisco, California, to Jewish parents Max and Hannah Goldberg, as the third of seven children. Rube began tracing illustrations when he was four years old, and first took professional drawing lessons when he was eleven. After graduating from the University of California Berkeley with a degree in engineering, Rube went on to work as an engineer for the City of San Francisco Water and Sewers Department. After six months Rube shifted gears and left the Sewers Department to become an office boy in the sports department of a San Francisco newspaper. While there he began to submit drawings and cartoons to the editor until he was finally published. Rube soon moved from San Francisco to New York to work for the Evening Mail drawing daily cartoons.

His work entered syndication in 1915, beginning his nationwide popularity. By 1922, he was earning $100,000 a year. A prolific artist, Goldberg produced several cartoon series simultaneously, including Mike and Ike (They Look Alike), Boob McNutt, Foolish Questions, “Lala Palooza” and The Weekly Meeting of the Tuesday Women’s Club. The cartoons that brought him lasting fame involved a character named Professor Lucifer Gorgonzola Butts. In that series, Goldberg drew labeled schematics of the comical “inventions” that would later bear his name. Rube’s early years as an engineer informed his most acclaimed work. A Rube Goldberg contraption – an elaborate set of arms, wheels, gears, handles, cups and rods, put in motion by balls, canary cages, pails, boots, bathtubs, paddles and live animals – takes a simple task and makes it extraordinarily complicated.

His most famous comic, however, was the one about Professor Lucifer Gorgonzola Butts, in which absurdly complicated apparatuses for accomplishing the simplest tasks were repeatedly presented, which made the name Rube Goldberg or the term “Rube Goldberg Machine” proverbial for unnecessarily complicated technical solutions. The first illustration depicting a “Rube Goldberg Machine” was an Automatic Weight Reducing Machine in 1914 using components such as a donut, bomb, wax, balloon and hot stove to trap an obese person in a sound and food proof prison, who had to lose weight before wriggling free. He used many simple subjects and made them humorous yet awfully complicated and tedious. This included scratching insect bites, scrubbing your back in a bath, opening a window, collecting mail and finding a ball. In 1931 the Merriam-Webster dictionary adopted the word “Rube Goldberg” as an adjective defined as accomplishing something simple through complicated means.

Rube Goldberg believed that most people preferred doing things the hard way instead of using a more simple and direct path to accomplish a goal. In the words of the inventor, the machines were a “symbol of man’s capacity for exerting maximum effort to achieve minimal results.” In 1938 he took a job at the New York Sun, where he drew political cartoons. In 1948 he was awarded the Pulitzer Prize for his editorial cartoon, “Peace Today,” which conveyed a warning against atomic weapons. He was the first cartoonist to ever be so honored. Later in his career, Goldberg was employed by the New York Journal American, and he remained there until his retirement in 1964. In retirement he produced bronze sculptures and several exhibitions of his works were organized, most recently in 1970 at the National Museum of American History in Washington. Goldberg died on December 7, 1970 at the age of 87.