You are here: Home › space › Valentin Glushko and the Space Race 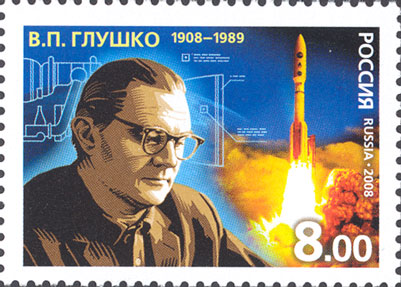 On January 10, 1989, Soviet engineer Valentin Petrovich Glushko passed away. Glushko was the principal Soviet designer of rocket engines during the Soviet/American Space Race. He worked with renowned rocket designer Sergey Korolyov. In Aug 1957, they successfully launched the first intercontinental ballistic missile and in October of the same year, sent the first artificial satellite, Sputnik I, into orbit.

Glushko was born in the Russian Empire in 1908 in what is today Odessa, Ukraine. He gained an interest in space and aeronautics at age fourteen, after reading Jules Verne novels, which lead him to write a letter to famed rocket pioneer Konstantin Tsiolkovsky in 1923 [1,8]. He studied at an Odessa trade school, where he learned to be a sheet metal worker. After graduation he apprenticed at a hydraulics fitting plant. He was first trained as a fitter, then moved to lathe operator. During his time in Odessa, Glushko performed experiments with explosives. These were recovered from unexploded artillery shells that had been left behind by the White Guards during their retreat. It was only in 1924-1925 that young Glushko wrote articles concerning the Moon’s exploration and the use of Tsiolkovsky-proposed rocket engines for space flight.

He attended Leningrad State University where he studied physics and mathematics, but left without graduating in 1929. From 1929-1930 he pursued rocket research at the Gas Dynamics Laboratory and began research on electrothermal, solid-fuel, and liquid-fuel rocket engines.[2] In 1932, the GDL was melded into Sergei Korolev’s Group for the Study of Reactive Motion (GRID, the first professional rocketry group in the world) to form the Reaction Engine Scientific, founded in Leningrad in 1931.[4]

In 1938 Glushko became caught up in Joseph Stalin‘s Great Terror and was sentenced to eight years in the Gulag. Despite his supposed imprisonment, however, Glushko was put to work on various aircraft projects with other arrested scientists and was finally released in 1944 by special decree. Together with Sergei Korolev, Glushko designed auxiliary rocket motors for interceptor airplanes to assist in short takeoffs. At the end of the war, Glushko was sent to Germany as one of the Soviet Union’s foremost experts on rockets to investigate their rocketry program, which had shot far ahead of any other in the world in the preceding few years.

A Russian Version of the V-2 Rocket

In 1946 he became the chief designer of his own bureau, the OKB 456, which would play a prominent role in the development of rocket engines within the Soviet Union. The Soviet Union had kidnapped all Germans in the Soviet Zone involved with the German V-2 program and brought them to the USSR, where they were sent to work on a Russian copy of the V-2 (the R-1) and to teach the local engineers how to develop this kind of rocket indigenously.[9] Glushko was put in charge of building the Russian version of the V-2 engine, the RD-100.

Advancing the Design of Rocket Engines

By 1951 the German engineers were sent home again and under Valentin Glushko the Russians were able to develop the ED-140, the next stage in the V-2 development. The OKB 456 designed several rocket engines for ballistic rockets, and also became responsible for supplying rocket engines for Sergei Korolev, among them most importantly the RD-107 liquid propellant engine between 1954 and 1957. The RD-107 was used to power the R-7, the world’s first intercontinental ballistic missile. In modified form, it launched Sputnik 1,[10] the first artificial satellite, into orbit, and became the basis for the R7 family which includes Sputnik, Luna, Molniya, Vostok, and Voskhod space launchers, as well as later Soyuz variants. R-7 used liquid oxygen as the oxidizer, and therefore had to be fueled immediately before launch, as the oxygen would “boil off” over time. In 1954 Glushko began to design engines for the R-12 Dvina (SS-4 Sandal), a theatre ballistic missile developed and deployed by the Soviet Union during the Cold War, which had been designed by Mikhail Yangel based on the use of storable propellants. 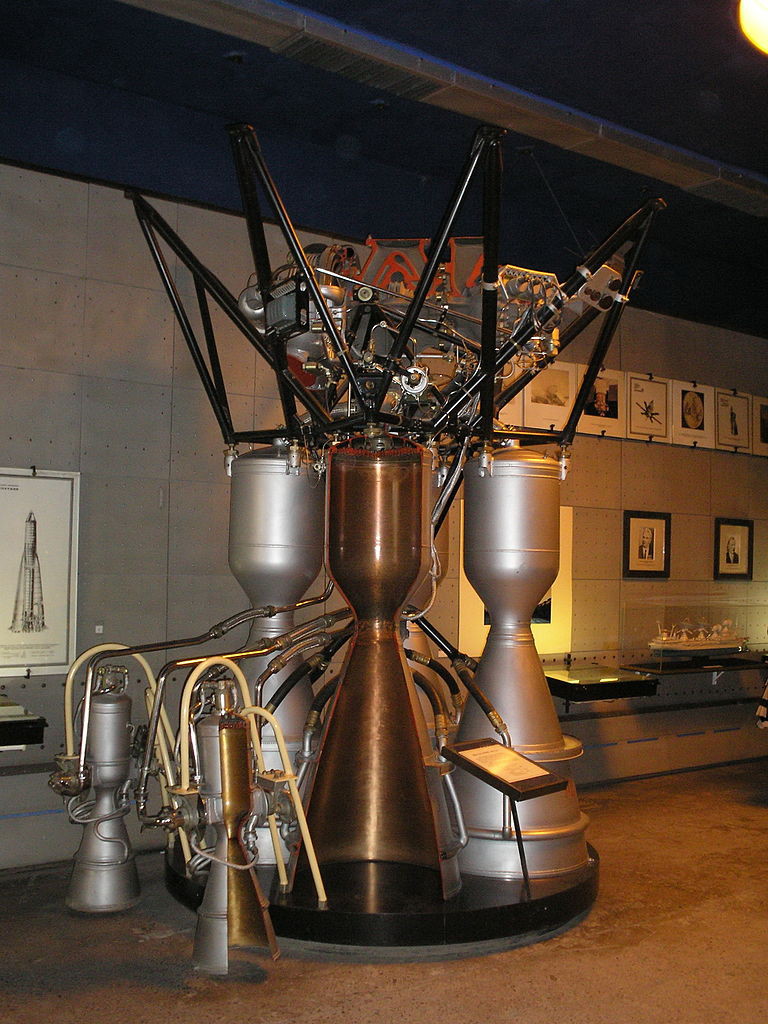 In 1974, following the successful American moon landings, the troubled Soviet program to send a man to the Moon was cancelled. The Soviet space program was consolidated, moving Vasily Mishin‘s OKB-1 (Korolev’s former design bureau), as well as other bureaus, into a single bureau headed by Valentin Glushko, later named NPO Energia. Glushko’s first act, after firing Mishin altogether, was to cancel the N-1 rocket, a program he had long criticized, despite the fact that one of the reasons for its difficulties was his own refusal to design the high power engines Korolev needed because of friction between the two men and ostensibly a disagreement over the use of cryogenic or hypergolic fuel.[5]

Glushko was an advocate of a new line of powerful launchers that he wanted to use for the establishment of a Soviet lunar base. However the American Apollo program was coming to an end at about that time, and the government wanted to build a competitor to the Space Shuttle called Buran.[6] Following extended development, Buran made a remarkably successful first unmanned flight on 15 November 1988. But it would never fly again. The Soviet Union was crumbling. Glushko’s ambitious plans – to build an orbiting defence shield, to renew the ozone layer, dispose of nuclear waste, illuminate polar cities, colonize the moon and Mars – were not to be. [7]