You are here: Home › space › Second in Space – The Flight of Alan Shepard

On November 18, 1923, American naval officer and aviator, test pilot, and astronaut Alan B. Shepard was born. Shepard was one of the original NASA Mercury Seven astronauts. In May 1961, Shepard made the first manned Mercury flight. Shepard’s craft entered space, but did not achieve orbit. He became the second person, and the first American, to travel into space, and the first person to manually control the orientation of his spacecraft.

Alan Bartlett Shepard Jr. was born in Derry, New Hampshire, to Alan B. Shepard Sr. and Pauline Renza Shepard (née Emerson). In 1938, Alan Shepard received a flight in a Douglas DC-3 as a Christmas present and during the following year he began cycling out to Manchester Airport, where he would do odd jobs in exchange for the occasional ride in an airplane or informal flying lesson. As World War II was approaching, Shepard attempted to join the Navy and easily passed the entrance exam to the United States Naval Academy at Annapolis, but at sixteen was too young to enter that year. Instead, the Navy sent him to the Admiral Farragut Academy, a prep school for the Naval Academy, from which he graduated with the class of 1941. It was the US Navy’s policy that aviation candidates should first have some service at sea, so Shepard was posted to a destroyer, USS Cogswell, where he served in the Pacific until the end of the war.

Around 1947, Alan Shepard received his Naval Aviator wings after taking first civil flight lessons and later receiving advanced training  at the Naval Air Station Pensacola in Florida. During the 1950s, Shepard was assigned test pilot for the F3H Demon, F8U Crusader, F4D Skyray and F11F Tiger and later the F5D Skylancer. He later attended the Naval War College at Newport, Rhode Island, and, upon graduating in 1957, was assigned to the staff of the Commander-in-Chief, Atlantic Fleet, as Aircraft Readiness Officer.

During 1959, President Dwight D. Eisenhower ordered the newly founded NASA to recruit its first astronauts from the ranks of military test pilots. Shepard became part of the recruiting process and NASA officials then briefed him and several further pilots on Project Mercury. They conceded that it would be a hazardous undertaking, but emphasised that it was of great national importance. That evening, Shepard discussed the day’s events with fellow naval aviators Jim Lovell, Pete Conrad and Wally Schirra. All were concerned about their careers, but decided to volunteer. Out of 69 candidates 37 were soon eliminated and to select the seven astronauts, a series of physical and psychological tests at the Lovelace Clinic and the Wright Aerospace Medical Laboratory were performed with the remaining 32. Only one candidate, Lovell, was eliminated on medical grounds at this stage, and the diagnosis was later found to be in error.

On April 1, 1959, Alan Shepard was informed about his selection and his and the other pilot’s identities were released in a press conference a week later: Scott Carpenter, Gordon Cooper, John Glenn, Gus Grissom, Wally Schirra, Alan Shepard, and Deke Slayton. They are also referred to as the Original Seven or Astronaut Group and piloted the manned spaceflights of the Mercury program from May 1961 to May 1963.

In 1961, it was announced that Alan Shepard had been chosen for the first American manned mission into space. In May, Shepard piloted the Mercury-Redstone 3 mission and became the second person, and the first American, to travel into space. On April 12, 1961, Soviet cosmonaut Yuri Gagarin had already become the first person in space, and the first to orbit the Earth. After the successful flight, Alan Shepard was awarded the NASA Distinguished Service Medal from President John F. Kennedy and the Distinguished Flying Cross. 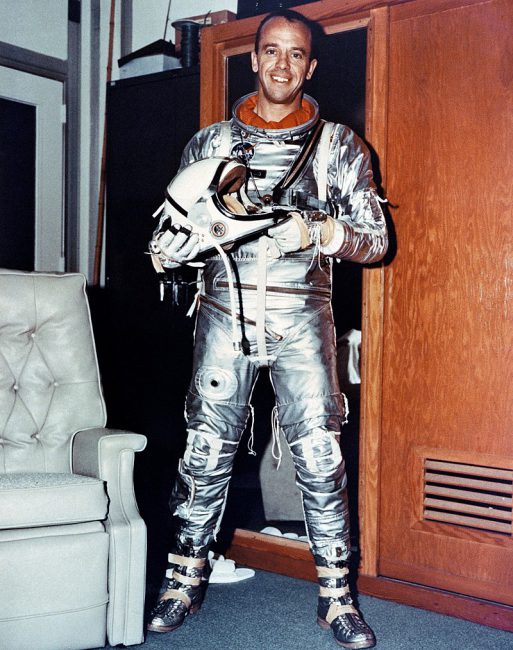 From Mercury to Gemini

During the next two Mercury missions on 21 July 1961 and 20 February 1962, Shepard was involved as liaison spokesman (Capcom). For the last mission in the Mercury program, Mercury-Atlas 9, he was scheduled as a replacement pilot in case Gordon Cooper should fail, but the flight took place without any problems on May 15 and 16, 1963. Shepard was nominated for the maiden flight of the Gemini spacecraft, Gemini 3 as commander. He had already started training with Tom Stafford when he was diagnosed with a health impairment in his left inner ear: Shepard suffered from Meniere’s Syndrome. Excessive pressure of the fluid in the inner ear leads to disturbances of the sense of balance, dizziness and nausea, which impaired the ability to fly.

The Oldest Man on the Moon

In early 1969, Shepard had surgery on the inner ear. In May, he was certified fully airworthy again so that he could resume training under the Apollo program. He handed over the management of the astronaut office to Tom Stafford. Shepard was first assigned as commander of the Apollo 13 mission, which was scheduled to launch in April 1970, but NASA management urged that he be given more time to prepare, as he had been away from astronaut training for a long time. Therefore, Shepard was transferred to Apollo 14 along with Stuart Roosa and Edgar Mitchell. This moon flight took place from January 31 (third moon landing on February 5, 1971) to February 9, 1971. Shepard was already 47 years old at this time, by far the oldest of the moon riders. He was the first Mercury astronaut to make it to the Moon, and he was to remain the only one. 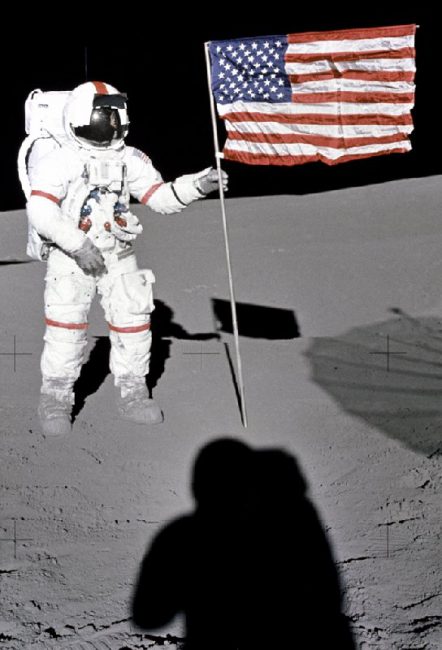 Shepard retired from NASA and the U.S. Navy on July 31, 1974, handed over the management of the astronaut office to John Young and concentrated on his work as a businessman, which had already made him a millionaire in astronaut days. In 1996, it was discovered that Alan Shepard suffered from leukemia, from which he died in 1998 at the age of 74.