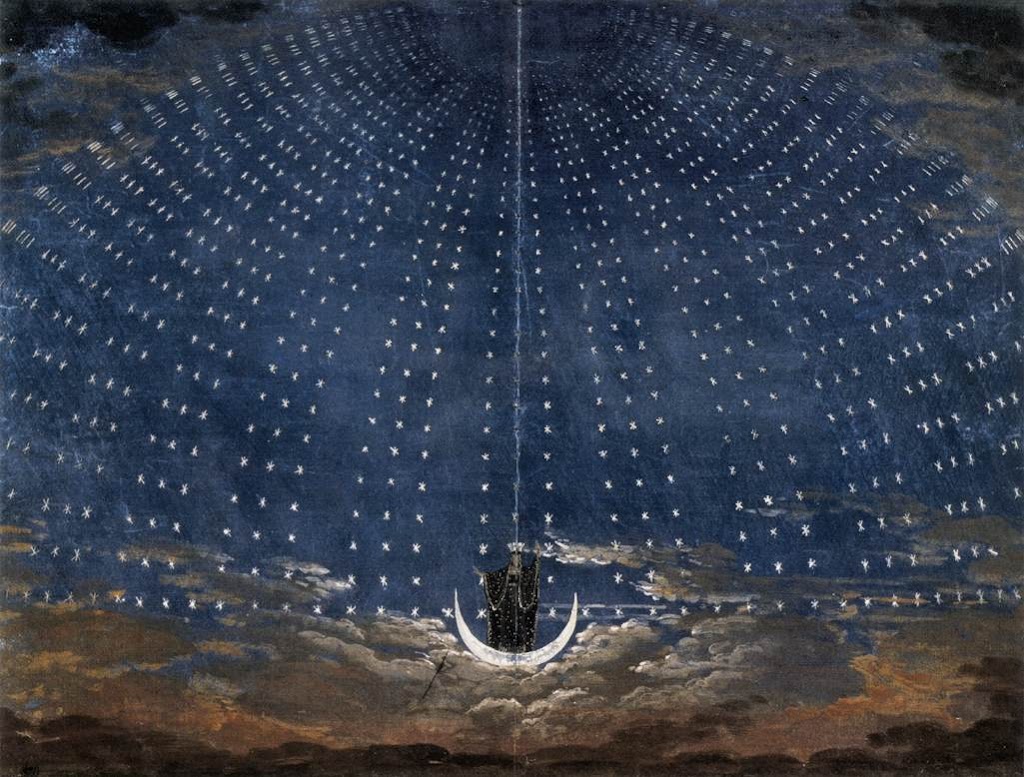 The arrival of the Queen of the Night. Stage set by Karl Friedrich Schinkel (1781–1841) for an 1815 production of The Magic Flute

Opera is not for everybody, but there are iconic pieces that have become a cultural heritage for all mankind and that are well known all over the globe. Thus, everybody knows Mozart, and if you ask people, what piece of Mozart they know best, then most times you will hear the answer ‘Die kleine Nachtmusik‘ or ‘Die Zauberflöte‘. On September 30, 1791, Wolfgang Amadeus Mozart‘s most famous opera, ‘Die Zauberflöte‘ (The Magic Flute) premiered in Schikaneder’s theatre in Vienna.

An Early Piece of Fantasy Fiction

The celebrated Magic Flute always was something special compared to other operas of the epoch. You might compare it to an early piece of fantasy fiction. It’s magic casts a spell over the audience and people either love it or hate it. But, most of today’s audience are not aware of all its references to freemasonry. In the case of Mozart’s opera, The Magic Flute, the Masonic traditions observed by the composer and its librettist (Emanuel Schikaneder)[5] have prompted some of the most philosophical discussions in the annals of opera. Johann Wolfgang von Goethe,[6] a fellow free-mason, speaks to the masses outside the circle of free-masonry regarding The Magic Flute: “It is enough that the crowd would find pleasure in seeing the spectacle; at the same time, its high significance will not escape the initiates.”

During the second half of the 18th century, a type of Singspiel had established itself in Vienna known as the Viennese Punch and Judy Opera, which is related to the Old Viennese Volkstheater. Typical of these operas was a plot in which love triumphed over many dangers. Besides humans, ghosts, sorcerers and wild animals, good and evil powers were acting figures. A mostly very elaborate production ensured a great success with the audience for these Singspiele, which were increasingly regarded as German operas, especially by the theatre director Karl von Marinelli.

The libretto to “The Magic Flute” is considered such a jumble of nonsense that it is as well to endeavour to extract some sense from it. The libretist Emanuel Schikaneder was a friend of Mozart and a member of the same Masonic Lodge. He also was the manager of a theatrical company and had persuaded Mozart to compose the music to a puppet show for him. He had selected for this show the story of “Lulu“, which had appeared in a volume of Oriental tales published by Christoph Martin Wieland under the title of “Dschinnistan.” In the original tale a wicked sorcerer has stolen the daughter of the Queen of Night, who is restored by a Prince by means of magic. While Schikaneder was busy on his libretto, a fairy story by Perinet, music by Wenzel Müller, and treating of the same subject, was given at another Viennese theatre. Its great success interfered with Schikaneder’s original plan. At that time, however, freemasonry was a much discussed subject. It had been interdicted by empress Maria Theresa and armed forces were employed to break up the lodges.

The Magic Flute – play bill of the first performance on September 30, 1791 at Schikaneder’s Theater auf der Wieden in Vienna.

As a practical man Schikaneder saw his chance to exploit the interdicted rites on the stage. Out of the wicked sorcerer he made Sarastro, the sage priest of Isis. The ordeals of Tamino and Pamina became copies of the ceremonials of freemasonry. He also laid the scene of the opera in Egypt, where freemasonry believes its rites to have originated. In addition to all this Mozart’s beautiful music ennobled the libretto even in its dull and unpoetical passages, and lent to the whole a touch of the mysterious and sacred. Because of its supposed relation to freemasonry, commentators have identified the vengeful Queen of the Night with Maria Theresa, and Tamino with the Emperor. Pamina, Papageno, and Papagena are set down as types of the people, and Monostatos as the fugleman of monasticism.

It must be noted, however, that no contemporary critic mentions the allusions to Freemasonry so openly revealed in the opera even in one word. Apparently, Mozart’s Masonic contemporaries had a more authentic view of their rituals and were aware that Schikaneder’s Egyptianizing symbolism-mash has nothing to do with Freemasonry, which derives from Salomon and his temple and not from pharaonic pyramids.

Mozart wrote on “The Magic Flute” from March until July and in September, 1791. September, 1791. September 30, two months before his death, the first performance was given. Mozart himself conducted the orchestra, Schikaneder played Papageno, while the role of the Queen of the Night was sung by Mozart’s sister-in-law Josepha Hofer. Right from the start the opera was a big success:

“Although there were no reviews of the first performances, it was immediately evident that Mozart and Schikaneder had achieved a great success, the opera drawing immense crowds and reaching hundreds of performances during the 1790s.” (Maynard Solomon)

The Magic Flute was first performed in Berlin in 1816. Karl Friedrich Schinkel created twelve fantastic stage sets of oriental landscapes, temples, dark vaults and starry shine for the performance of the Queen of the Night with star dome and narrow crescent moon. However, the Magic Flute is still one of the most frequently performed Mozart operas in the world today.