You are here: Home › music › Emanuel Schikaneder – The Most Talented Theatre Man of his Era 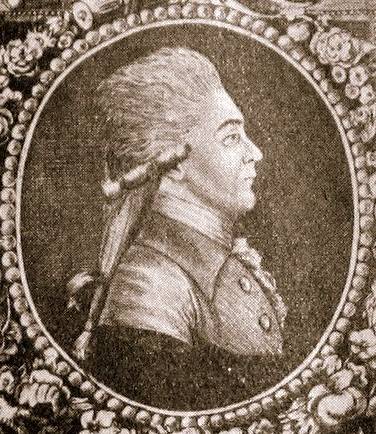 On September 1, 1751, German impresario, dramatist, actor, singer and composer Emanuel Schikaneder was born. So you have never heard of Schikaneder? Oh, but for sure you have heard of Mozart [1], and Schikaneder wrote the libretto of Wolfgang Amadeus Mozart‘s popular opera The Magic Flute [7]. Moreover, he was often referred to as “one of the most talented theater men of his era” and was the builder of the Theater an der Wien. While today Mozart is regarded as the musical genius, Schikaneder always is greeted with smiles as being only the “entertainer”, who besides Goethe and Shakespeare also had amusing stories of bears and apes in his repertoire.

Schikaneder was born among three siblings in Straubing in Bavaria to a family of poor domestic servants, Joseph Schickeneder and Juliana Schiessl. Schikaneder’s father died and his mother returned to Regensburg, making a living selling religious articles from a wooden shed adjacent to the local cathedral. Schikaneder received his education at a Jesuit school in Regensburg as well as training in the local cathedral as a singer. As a young adult he began to pursue his career in the theater, appearing with Andreas Schopf‘s theatrical troupe around 1773 and performing opera, farce, and Singspiel (operetta). Schikaneder danced at a court ballet in Innsbruck in 1774, and the following year his own Singspiel Die Lyranten was debuted there.

His own Theater Company

Five years later in 1778, he was the manager of his own company. His repertoire included plays by Gotthold Ephraim Lessing,[10] Johann Wolfgang von Goethe,[6] and Pedro Calderón.[9] His Shakespearean roles, especially, were widely admired, and he was particularly notable as Hamlet. The company also performed farces and Singspiele (operettas), and Schikaneder’s growing interest in the musical theatre led in 1780 to his acquaintance with the Mozart family.[3]

In the fall of 1780, the Schikaneder troupe made an extended stay in Salzburg. The Mozart family at the time consisted of father Leopold, Nannerl, and Wolfgang. The Mozarts rarely missed his shows and invited Schikaneder to Sunday sessions of Bölzlschiessen (dart shooting), their favorite family sport. From November 1784 to February 1785, Schikaneder collaborated with theater director Hubert Kumpf for a series of performances at the Kärntnertortheater in Vienna upon invitation by the Emperor Joseph II, who had seen him perform the previous year in Pressburg. The Austrian Empire at the time was governed by the system of hereditary aristocracy, which was falling under increasing criticism as the values of the Enlightenment spread. But, Schikaneder and his colleague then stepped over the line, initiating a production of Beaumarchais‘ then-scandalous send-up of the aristocracy, The Marriage of Figaro.[7] This production was canceled by the Emperor at the last minute.

In 1785, Schikaneder’s wife, Eleonore, left him as a result of his infidelities. She moved in with Schikaneder’s former colleague, Johann Friedel, and formed a traveling theater troupe with him. Seeking new options, Schikaneder proposed to the Emperor that he be allowed to build a new theater in the suburbs, a request that quickly received the Emperor’s official approval. Nevertheless, Schikaneder and his wife joined in 1789 again for a professional partnership to found a new company, financed by Joseph von Bauernfeld, a Masonic brother of Mozart, with plans of an emphasis on opera. The new company was successful, and Die Entführung aus dem Serail again became part of the repertory. Several aspects of the company’s work emerged that later came to be immortalized in The Magic Flute.

In the September 1791 The Magic Flute, with music by Mozart premiered at the Freihaus-Theater an der Wieden in the Vienna suburb. Mozart, who conducted the orchestra at the premiere, was a close friend of one of the singer-composers of the troupe, tenor Benedikt Schack (the first Tamino), and had contributed to the compositions of the troupe, which were often collaboratively written. The libretto is usually considered to have been written by Schikaneder, although Schikaneder’s playwright Karl Ludwig Giesecke claimed to have written it. Schikaneder partly based the libretto on several earlier plays, particularly Oberon by Sophie Seyler, which had been plagiarized by Giesecke for Schikaneder’s troupe two years earlier and which established the company’s tradition of fairy tale operas. The opera incorporated a loose mixture of Masonic elements and traditional fairy-tale themes. Schikaneder took the role of Papageno — a character reflecting the Hanswurst tradition, and thus suited to his skills — at the premiere.

“Although there were no reviews of the first performances, it was immediately evident that Mozart and Schikaneder had achieved a great success, the opera drawing immense crowds and reaching hundreds of performances during the 1790s”
(Maynard Solomon about the Premiere of The Magic Flute)

Schikaneder continued to produce the opera at intervals for the rest of his career in Vienna. Mozart died only a few weeks after the premiere, on 5 December 1791. Schikaneder was distraught at the news and felt the loss sharply. He evidently put on a benefit performance of The Magic Flute for Mozart’s widow Constanze, who at the time faced a difficult financial situation. Schikaneder continued to write works in which he played the main role and which achieved popular success. Although many of the works performed were popular successes, the expenses of Schikaneder’s elaborate productions were high, and the company gradually fell into debt.

The New Theater an der Wien

But, with the help of wealthy merchant Bartholomäus Zitterbarth the company eventually could be saved from bancruptcy. Schikaneder and new partner Zitterbarth planned together to construct a grand new theater for the company on the other side of the Wien River. Schikaneder still had in his possession a document from the late Emperor Joseph II permitting him to construct a new theater. The new Theater an der Wien opened on June 13, 1801 with a performance of the opera Alexander, to Schikaneder’s own libretto with music by Franz Teyber. Schikaneder wanted Beethoven to compose an opera for him. After offering Beethoven an apartment to live in inside the theater building, he also offered his libretto, Vestas Feuer. Beethoven, however, found Vestas Feuer unsuited to his needs. Nevertheless, Beethoven continued to live in the Theater an der Wien for a while as he switched his efforts to his opera Fidelio, which premiered in the Theater an der Wien, but not under Schikaneder’s direction.

By 1804, Schikaneder’s career had taken a downward turn; his productions could not bring in enough customers to cover their cost. He sold the Theater an der Wien. In the next years, Schikaneder lost most of his fortune. During a journey to Budapest in 1812 to take a new post, he was stricken with insanity and died impoverished in Vienna on September 21, 1812 at age 61.