You are here: Home › art › George Romero and his ‘Night of the Living Dead’ 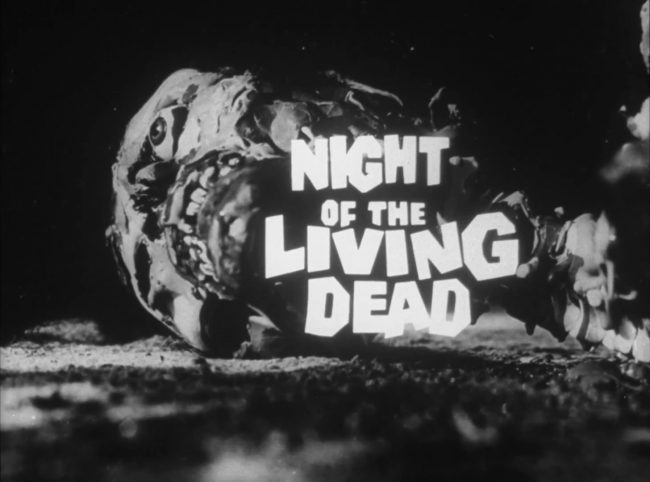 Screenshot from the trailer for the film Night of the Living Dead (1968).

“My stories are about humans and how they react, or fail to react, or react stupidly. I’m pointing the finger at us, not at the zombies. I try to respect and sympathize with the zombies as much as possible.” – George A. Romero

The movie starts out with the siblings Barbra and Johnny who get attacked by the living dead while visiting a graveyard. Johnny gets instantly killed but his sister is rescued by a man named Ben. Together they flee into an old farmhouse where they meet a family, also terrified by the zombies. One after the other gets either killed and eaten by the scary creatures or transforms into a zombie as well. Ben turns out to be the only survivor and hides in the basement. Unfortunately he is mistaken to being a zombie by a police officer, who enters the house in the next morning and gets shot. The movie ends with Ben getting burned along with all the other living dead.

George A. Romero grew up in the Bronx district of New York and attended a Catholic school there. At the age of 14, Romero began filming with a cine-film camera. In 1958 he won a Future Scientists of America Award for a documentary on geology called Earthbottom, which he produced as part of a high school project. He moved to Pittsburgh to study art, design and theater at Carnegie Mellon University. After graduating and earning a Bachelor of Arts degree in 1961, he worked as an assistant in a news production. In the same year he founded the production company The Latent Image together with some friends from his university to shoot commercials and educational films.

The Film Industry’s Thirst for the Bizarre

Together with his friends John Russo and Russell Streiner he founded a company and began working on the movie to capitalize on the film industry’s “thirst for the bizarre“. The initial budget of the movie was only $6,000, but after finding more investors the movie was finally shot on a budget of $114,000. The music used in the film cost a total of 1,500 US dollars and comes from the archive of Capitol Records Hi-Q stock. To keep the budget under control, Romero shot the film with the help of friends and acquaintances. Since the participants were only available in their free time, the shooting had to be interrupted several times.

From Ghouls to Zombies

The movie itself turned out somewhat differently to what was originally planned. The first ideas included violent aliens visiting Earth and attacking teenagers. It was then Romero who came up with the idea to focus on reanimated corpses subsisting on human flesh. Romero just did not use the term ‘zombies‘ back then, he preferred the usual term ‘ghouls‘, which is known to be first mentioned in ‘One Thousand and One Nights‘. The word ‘zombies‘ has been used in the 1920 as well, but was never really adapted by the general public until it hit society with the movie ‘Night of the Living Dead‘. This is very surprising since the term ‘zombies‘ has not been used once in the entire movie.

The Night of the Living Dead

‘Night of the Living Dead‘ hit the nerve of the time with his enigmatic statement against racism and the Vietnam War and quickly became an insider tip. The controversial film was also included in the collection of the New York Museum of Modern Art. It also earned much applause and ended up being a great success, financially as well as in the cultural sense. It was able to revolutionize the movie industry and set totally new standards in film making. George A. Romero used this first success as the start of a whole zombie series including ‘Dawn of the Dead‘ or ‘Survival of the Dead‘. The remake Dawn of the Dead at the beginning of 2004 was a worldwide box-office success. This gave Romero himself the opportunity to add another film to his zombie series. For this reason, he interrupted the pre-production of Diamond Dead in 2004 to pursue the filming of the long-awaited fourth part of his zombie cycle, Land of the Dead, which was finally financed by Atmosphere Entertainment after many years of negotiations with various Hollywood studios. Romero completed another zombie film entitled Diary of the Dead in 2007, which he wrote and directed. After Land of the Dead was a production of a larger studio, this film is again an independent production. In 2009 Romero received an invitation to the competition of the 66th Venice Film Festival for his sixth zombie film Survival of the Dead.

And It Is Public Domain

The title of the original film was until shortly before the release Night of the Flesh Eaters. But there was already a movie with the same title. After threats from the producers of this film the title was changed to Night of the Living Dead. The first distributor of the film, the Walter Reade Organization, had to change the title. However, Reade forgot to include a copyright notice that was still included in the original title sequence. Since this was still necessary according to US-American copyright law at that time in order to obtain the copyright to a work, The Night of the Living Dead is therefore in the public domain in the USA.