You are here: Home › music › Mozart’s Don Giovanni – Birth of an Archetype 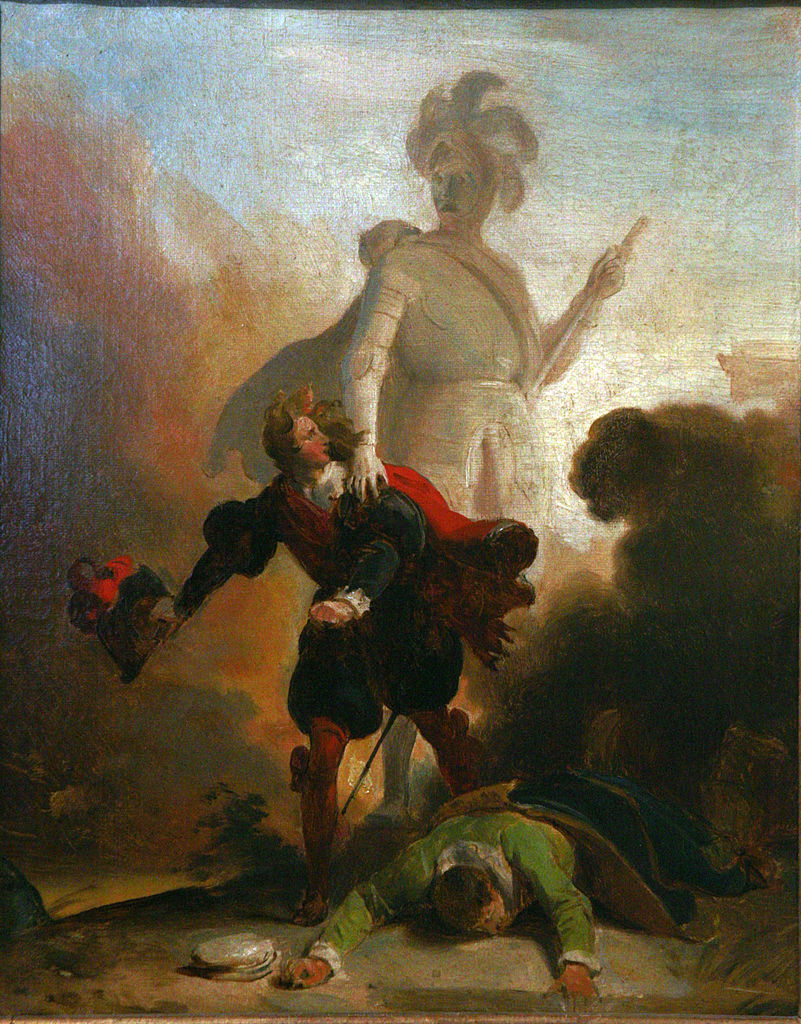 Don Juan and the statue of the Commander, Alexandre-Évariste Fragonard (1830/1835)

On October 29, 1787, Wolfgang Amadeus Mozart’s Opera Don Giovanni with the libretto by Lorenzo da Ponte premiered in Prague. Being one of the most perfomed operas worldwide, it proved a fruitful subject for writers and philosophers based on the legends of Don Juan, a fictional libertine and seducer. Besides the beautiful Requiem, this is my personal favorite in the works of Mozart. I’ve seen it performed many times live on stage, in tv, as well as having listened the famous arias “Là ci darem la mano“, Don Giovanni‘s Champaign aria, or Leporello’s “Madamina, il catalogo è questo” again and again.

The opera was commissioned as a result of the overwhelming success of Mozart’s trip to Prague in January and February of 1787 with his previous opera, The Marriage of Figaro. This led the theatre’s impresario to commission a new work from the composer. The librettist Lorenzo Da Ponte was extremely busy writing for other composers at the Viennese court and decided to adapt an existing libretto on the subject of Don Juan. Don Giovanni was originally to have been performed on 14 October 1787 for a visit to Prague of the Archduchess Maria Theresa of Austria, niece of the Emperor Joseph II, and her new husband, Prince Anthony of Saxony. But, Mozart was not able to finish the composition with the Italian libretto by Lorenzo Da Ponte in time, and the premiere was scheduled for October 29, 1787. The Prager Oberpostamtzeitung reported, “Connoisseurs and musicians say that Prague has never heard the like,” and “the opera … is extremely difficult to perform.” Mozart also supervised the Vienna premiere of the work, which took place on 7 May 1788, for which he added two more arias and applied further modifications. Although Vienna’s audiences were less enthusiastic than Prague’s, Don Giovanni was appreciated by sophisticated music lovers there.[3]

Based on an old Legend

What is the opera about? Don Giovanni, a young, arrogant, and sexually promiscuous nobleman, abuses and outrages everyone else in the cast, until he encounters something he cannot kill, beat up, dodge, or outwit. The original play was written in the Spanish Golden Age according to its beliefs and ideals. Tirso de Molina wrote “El burlador de Sevilla” in 1630 in order to demonstrate a life-changing lesson. He saw that everyone was throwing his or her life away, living and sinning as they pleased, because they believed that in the end, as long as they repented before they died, they would receive the grace to enter heaven. Through his play, however, he shows that even Don Juan, who is identified as the very devil, a “man without a name” and shape-shifter, has to eventually pay for his sins.[3] The story on which da Ponte based his libretto indeed was very old. The statue of a murdered man accepting an insolent invitation to banquet with his murderer, appearing at the feast and dragging him down to hell.[4]

Mozart deftly underscores the action with his music. For example, in an aria midway through Act I (the “Madamina, il catalogo è questo” also referred to as the “Catalogue Aria”), Don Giovanni’s servant, Leporello, reads delightedly from his little black book, listing the many women who have been conquered by Don Giovanni in each of several nations — 1,003 women in Spain alone! Mozart matches musical characteristics to various adjectives, so that petite women are portrayed with short notes and ladies of more grandeur are described with longer note values.[3] All this happens, when Leporello waits outside the Commendatore’s home as Don Giovanni, his master, is inside ravishing the Commendatore’s daughter, Donna Anna. The masked Don Giovanni suddenly runs from the house with Donna Anna following him. Awakened by the clamor, the Commendatore challenges Don Giovanni to a duel which ends in the Commendatore’s death. After Don Giovanni and Leporello flee, Donna Anna and her betrothed, Don Ottavio, swear vengeance upon the Commendatore’s masked killer.[6]

A Masterpiece of Disturbing Ambiguity

The result is a disturbing ambiguity that’s at the core of Mozart’s masterpiece. Don Giovanni’s personality is so beguiling that audiences actually tend to root for him, even as his dark side becomes more and more obvious. Still, when he eventually receives a personal invitation to hell, and his enemies rejoice, it’s hard to blame them.[5] Don Giovanni is unusual because it is something of a dark comedy. Most operas in Mozart’s time were purely comic or tragic, but Don Giovanni is a hilarious show that delves into darkness, complete with seduction, murder, and a statue from beyond the grave.[7] BTW, I haven’t told you about my first theatre experience with Don Giovanni in the theatre of Trier, Germany. Of course I was absolutely overwhelmed by Mozart’s music. But coming back to this concept of disturbing ambiguity, in Trier they had installed the role of the dead Commendatore in the disguise of Darth Vader. Now, this was also extraordinary, seeing Don Giovanni (in typical 18th century clothing) being threatened by Darth Vader….