You are here: Home › archeology › William Stukeley and the Mystery of Stonehenge 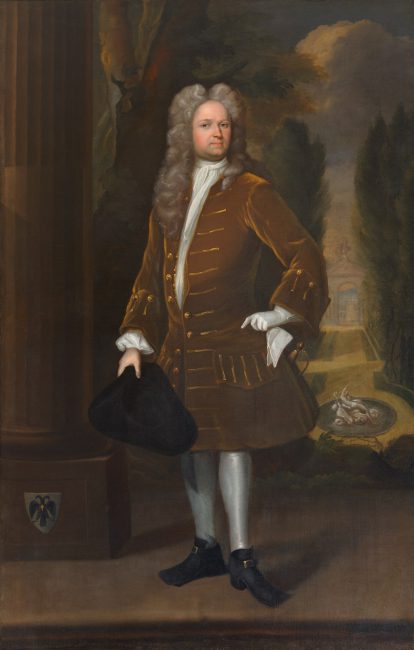 On November 7, 1687, English antiquarian and Anglican clergyman William Stukeley was born. He pioneered the archaeological investigation of the prehistoric monuments of Stonehenge and Avebury, work for which he has been remembered as probably the most important of the early forerunners of the discipline of archaeology. Stukeley was also one of the first biographers of Isaac Newton, of whom he was a friend.

William Stukeley was born in Holbeach in Lincolnshire, as the son of a lawyer. After taking his M.B. degree at Corpus Christi College, Cambridge, Stukeley went to London and studied medicine at St Thomas’ Hospital. While still a student he began making topographical and architectural drawings as well as sketches of historical artefacts. In 1710, he started in practice in Boston, Lincolnshire, becoming a member of Spalding Gentlemen’s Society, before returning in 1717 to London. In the same year, he became a Fellow of the Royal Society and, in 1718, joined in the establishment of the Society of Antiquaries, acting for nine years as its secretary. In 1719 Stukeley took his M.D. degree, and in 1720 became a Fellow of the Royal College of Physicians, publishing in the same year his first contribution to antiquarian literature.

“Our predecessors, the Druids of Britain, tho’ left in the extremest west to the improvement of their own thoughts, yet advanc’d their inquiries, under all disadvantages, to such heights, as should make our moderns asham’d, to wink in the sunshine of learning and religion.” from William Stukeley: Stonehenge: A Temple Restor’d to the British Druids, Preface. (1740)[2]. 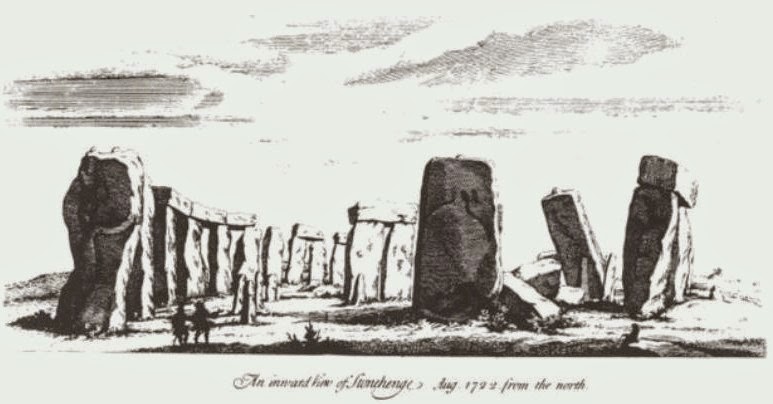 After reading an account by antiquary and natural philosopher John Aubrey, who lived about 70 years before Stukeley, he began to develope a particular interest in the Stonehenge and Avebury monuments. He spent years surveying Stonehenge and Avebury and mapping the burials and earthworks around them. Stukeley’s principal works, elaborate accounts of Stonehenge and Avebury, appeared in 1740 and 1743. These were supposed to be the first of a multi-volume universal history. Stukeley believed that these pre-Roman sites had been built by ‘Celts‘, led by their priests, the Druids. Mixing speculation with evidence from ancient texts, he concluded that the Celts were originally Phoenician colonists, who had ‘civilized’ Britain long before the Romans arrived. Stukeley painted a romantic but fictitious vision of the Druids worshipping at Stonehenge that has lasted to the present day. He proposed that the cults of the druids are based on an ancient patriarchial religion that also was the original religion of mankind. This had subsequently degenerated as idol-worship had emerged. Stukeley himself being a priest of the Church of England, believed that the Druids and the early Christians were examples of this religion. Interestingly, these views were widely and enthusiastically accepted in the late 18th century.

Stukeley perceived the entire prehistoric landscape as laid out in a sacred pattern with centres at Stonehenge and Avebury. The stone circles and earthworks at Avebury he recognized as part of a larger figure inscribed in the landscape in the form of a serpent. Stukeley saw serpents, and dragons (a variant form of the same creature, as are also “worms”), all over countryside and linked the image with the many local legends of dragons and dragon-killers found throughout the Britain. The places associated with the dragon legend appear always to coincide with sites of ancient sanctity.[3]

Stukeley’s work on Stonehenge was one of the first to attempt to date the monument. Working with the renowned astronomer Edmund Halley, he proposed that the builders of Stonehenge knew about magnetism, and had aligned the monument with magnetic north. Stukeley used some incomplete data about the variation of the North Magnetic Pole

Despite his romantic theorizing, he was an excellent field archaeologist, and his surveys of the monuments in the 1720s remain of interest. His extensive antiquarian travels are recorded in Itinerarium Curiosum (1724Observant Itinerary”). Besides his work on archeology, Stukeley was one of the first learned gentlemen to be attracted to speculative freemasonry as well as a friend of Isaac Newton, about whom he wrote a memoir of his life in 1752. Actually, this is one of the earliest sources for the story of the falling apple that inspired Newton’s formulation of the theory of gravitation. Artist, prolific writer and poet, architect, archaeologist, antiquarian, scientist, physician, clergyman, druid, musician, numismatist, traveller, genealogist, gardener and animal lover, William Stukeley was all of these. After Stukeleys death in 1765 it was not until the 19th century that archaeologists took up from where he had finished his work.

Stukeley conducted excavations, and seems to have been the first to create and document profiles. He described and documented the Stonehenge cursus and interpreted it as a Roman chariot race track. Although his drawings show a straight end, he describes it as convex, “like the end of a Roman circus”. He interpreted the long bed at the end of the cursus as a judge’s tribune. Stonehenge itself overlooked the center of the racecourse and provided a good vantage point of “[…] the wide plain and the mass of racing chariots, riders, and pedestrians […]”. He also considered Dyke Hills (Dorchester) and Raw Dykes (Leics.) as racecourses, they are interpreted today as ramparts of an oppidum and Roman water conduit, respectively. Some of the terms he introduced, such as “cursus” and “cove” are still in use today in British archaeology.