You are here: Home › medical science › Michael Servetus and the Pulmonary Circulation 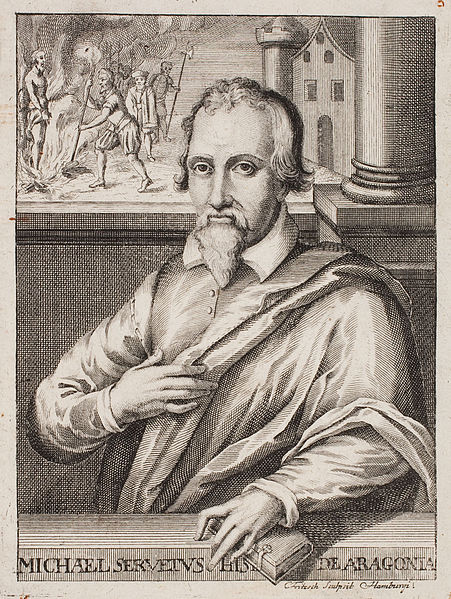 Around September 29, 1509 (or 1511), Spanish theologian, physician, cartographer, and Renaissance humanist Michael Servetus was born. Servetus was a polymath versed in many sciences: mathematics, astronomy and meteorology, geography, human anatomy, medicine and pharmacology, as well as jurisprudence, translation, poetry and the scholarly study of the Bible in its original languages. He was probably the first European to correctly describe the function of pulmonary circulation.

“Michael Servetus, alone, but trusting in Christ’s most sure protection.”
– While in prison, Servetus signed his last letter with these words.

The Trouble with the Birth Date

For a long time, it was held that Servetus was probably born in 1511 in Villanueva de Sigena in the Kingdom of Aragon, present-day Spain. The day of 29 September has been conventionally proposed for his birth, due to the fact that 29 September is Saint Michael’s day according to the Catholic calendar of saints, but there are no data supporting this claim. Some sources give an earlier date based on Servetus’ own occasional claim of having been born in 1509.

Michael Servetus studied law in Toulouse. In 1531, he published his novel ideas on the Trinity in De Trinitatis erroribus libri vii. In his work, Servetus attacked the orthodox teaching and attempted to form a view of his own. One year later, he published an updated version titled Dialogorum de Trinitate libri ii. Then, after moving to Lyon under the name of Villanovanus, Servetus read and edited scientific works. He published a translation of Ptolemy’s Geographia. In the field of astrology, Michael Servetus published a work, discussing that the stars influenced health. In 1538, Servetus matriculated in medicine at Paris, despite attacks by the faculty, and subsequently became physician to the archbishop at Vienne, France. Servetus published his probably most important work, Biblia sacra ex Santis Pagnini tra[ns]latione in 1542, which was notable for its theory of prophecy.

In 1546, Michael Servetus forwarded the manuscript of an enlarged revision of his ideas, the Christianismi Restitutio, to Calvin, expressing the desire to meet him. However, after a few letters, it is believed that Calvin kept the manuscript and declared that if Servetus ever came to Geneva he would not allow him to leave alive. In 1553, a rewritten version of Servetus’ manuscript was secretly printed in 1,000 copies at Vienne. In it, Sertevus discussed the relationship between the Spirit and regeneration. Servetus also described as the first known European the discovery of the pulmonary circulation of blood. However, since in general Christianismi Restitutio was a theology work condemned by most of the Christian factions of his time, the discovery of pulmonary circulation remained mostly unknown until the dissections of William Harvey in 1616.[4]

Trialed, Guilty, and Burned to Death

Guillaume de Trie got access to Michael Servetus’ letters to Calvin, and Servetus and his printers were exposed to the inquisitor general at Lyon. However, Servetus managed to escape during the trial and he later appeared in Geneva. There, Michael Servetus was tried for heresy in 1553 and found guilty, mainly on his views of the Trinity and Baptism. In October, he was burned alive and his execution resulted in a Protestant controversy on imposing the death penalty for heresy, drew severe criticism upon John Calvin, and influenced Laelius Socinus, a founder of modern unitarian views.

The execution of a Protestant by other Protestants for questions of faith sparked heated debate even among Calvinists. The most momentous were the writings in which the Basel theologian Sebastian Castellio critically dealt with Servet’s persecution. In several works – including De haereticis, an sint persequendi (“Of the heretics and whether they should be persecuted“) and Contra Libellum Calvini (“Against Calvin’s little book“) – he argued against the criminal prosecution of so-called misbelievers, referring not only to the Bible and the Church Fathers, but also to Martin Luther, other reformers and even Calvin himself. In it, Castellio developed a theory of fundamental religious tolerance that was to become established throughout Europe in the course of the Enlightenment.

The Lungs and the Pulmonary Circuit, [8]