You are here: Home › medical science › William Harvey and the Blood Circulation 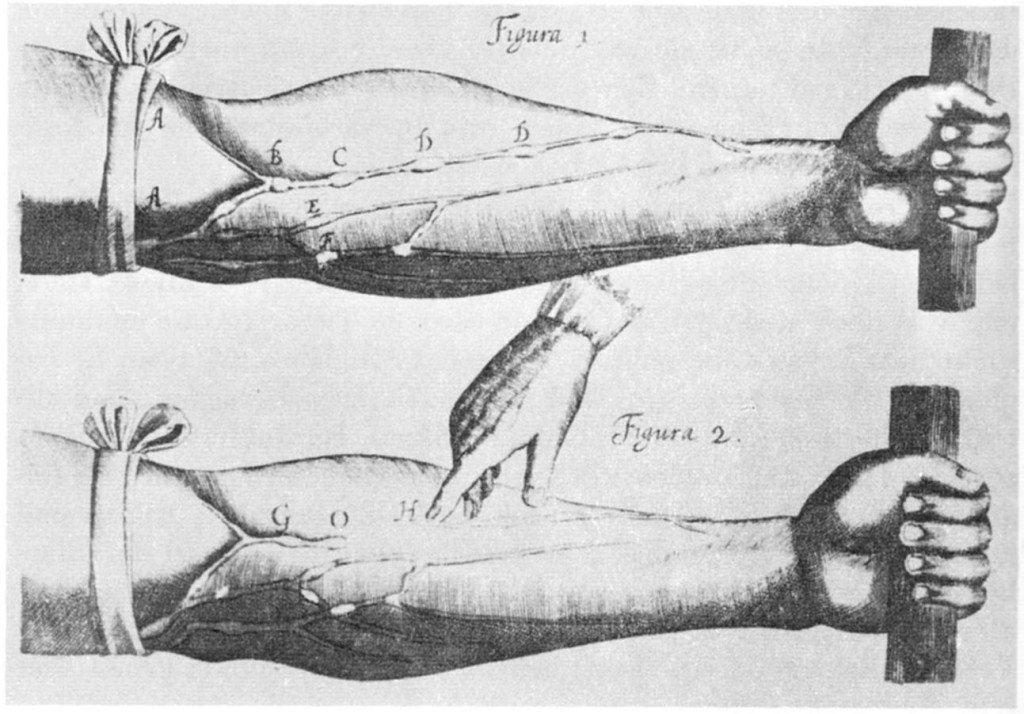 On April 1, 1578, English physician William Harvey was born. Harvey made seminal contributions in anatomy and physiology. He was the first known to describe completely and in detail the systemic circulation and properties of blood being pumped to the brain and body by the heart.

“The heart of animals is the foundation of their life, the sovereign of everything within them, the sun of their microcosm, that upon which all growth depends, from which all power proceeds.”
– William Harvey, De Motu Cordis et Sanguinis (1628)

William Harvey was born in Folkstone, Kent, UK, the eldest of nine children of Thomas Harvey, a jurat of Folkestone, where he served as mayor in 1600, and his wife Joan Halke. Harvey first studied at Folkestone, then King’s School, Canterbury. Later he joined Gonville and Caius College in Cambridge. William Harney graduated as a Bachelor of Arts from Caius in 1597 and afterwards traveled through Europe via France and Germany to Italy and entered the University of Padua in 1599. William Harvey graduated as a Doctor of Medicine at the age of 24 from the University of Padua on 25 April 1602.

Harvey moved back to England after his graduation, earned his Doctor of Medicine at Cambridge and became a fellow of Gonville and Caius College. He started to establish himself in London at the College of Physicians in 1604. Harvey started to increase his reputation and was elected a Fellow of the College of Physicians three years later. He then joined St Bartholomew’s Hospital. In 1615, Harvey was appointed Lumleian lecturer, which meant to give lectures for a period of seven years, with the purpose of “spreading light” and increasing the general knowledge of anatomy throughout England. William Harvey continued as a lecturer while taking care of his patients at St Bartholomew’s Hospital. In 1618, he was appointed ‘Physician Extraordinary’ to King James I. 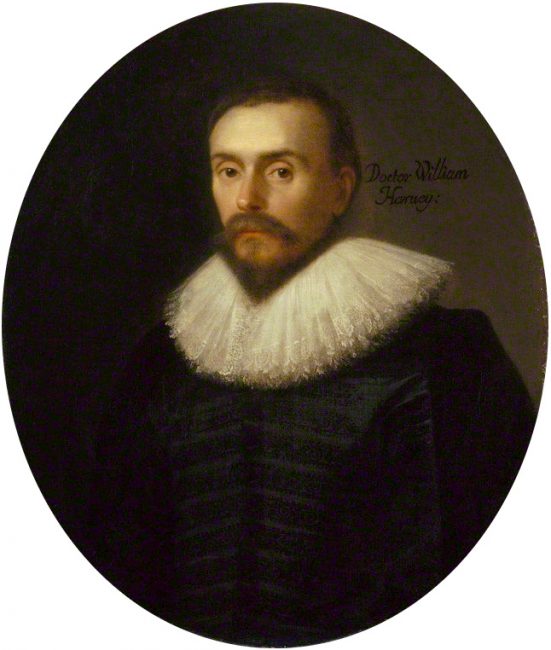 The Circulation of Blood

William Harvey’s famous work, ‘De Motu Cordis et Sanguinis‘ was published in 1628 and deals with the circulation of blood.[2] In 17 chapters, Harvey describes the action of the heart and the consequent movement of the blood around the body in a circuit. He analyses the overall structure of the heart and the arteries, showing how the arteries’ pulsation depends upon the contraction of the left ventricle, while the contraction of the right ventricle propels its charge of blood into the pulmonary artery. He observed in contrast to previous scientists that these ventricles move together almost simultaneously and not independently. 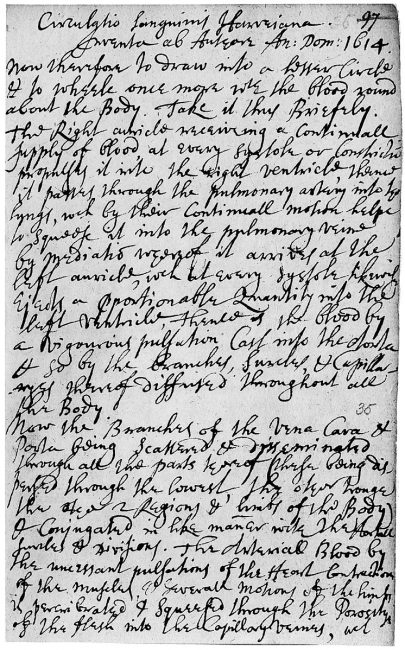 Page from notebook of Henry Power which he gives the date 1614 for Harvey’s discovery of the circulation of the blood. Power’s notes were written many years later.
photo: Wellcome Images, Keywords: William Harvey

In the chapter eight of his work, Harvey attempted to estimate the amount of blood passing through the heart from the veins to the arteries. This also meant that Galen’s accepted view of the liver as the origin of venous blood was challenged. Harvey estimated the capacity of the heart, how much blood is expelled through each pump of the heart, and the number of times the heart beats in a half an hour. For example, he estimated the capacity of the heart to be 43 ml and that every time the heart pumps, 1/8 of that blood is expelled. Harvey’s calculations proved the overall impossible aforementioned role of the liver. However, he further wanted to prove how the blood circulated in a circle. Mostly on fish, Harvey noticed that tying its veins, the heart would become empty. However, when tying its arteries, the heart would swell up. His experiments was later performed on the human arm. Tying a tight ligature onto the upper arm would cut off blood flow from the arteries and the veins. When this was done, the arm below the ligature was cool and pale, while above the ligature it was warm and swollen. He also realized that the little bumps in the veins were the valves, discovered by his teacher, Hieronymus Fabricius.[5] The great mystery of how the blood gets from the arteries into the veins was solved with the help of the microscope by the Italian anatomist Marcello Malpighi [6] with his discovery of the capillaries. It was only then, in the last third of the 17th century, that the circulation theory of Harvey, who had previously been ridiculed as a “circulator”, became generally accepted.

A Sceptic regarding Witchcraft

Harvey was a prominent sceptic regarding allegations of witchcraft. He was one of the examiners of four women from Lancashire accused of witchcraft in 1634, and as a consequence of his report, all of them were acquitted. Earlier, in 1632, while travelling with the King to Newmarket, he had been sent to investigate a woman accused of being a witch. Initially he told her that he was a wizard and had come to discuss the Craft with her, and asked whether she had a familiar. She put down a saucer of milk and called to a toad which came out and drank the milk. He then sent her out to fetch some ale, and killed the toad and dissected it, concluding that it was a perfectly ordinary animal and not supernatural in any way. When the woman returned she was naturally very angry and upset, but Harvey eventually silenced her by stating that he was the King’s Physician, sent to discover whether she were a witch, and if she were, to have her apprehended.[8]

“Man comes into the world naked and unarmed, as if nature had destined him for a social creature, and ordained him to live under equitable laws and in peace”
– William Harvey, De Generatione Animalium (1651)

Unfortunately, almost all of Harvey’s manuscripts were lost either during the Civil War or during the great fire of London (1666)[7]. What distinguished William Harvey from many of his researching contemporaries was his clear separation of hypotheses and facts. He only accepted the results of his research when they were also confirmed in control experiments. He was thus the first to introduce scientific methods in the field of biology and medicine, and can thus be considered the founder of modern medicine and physiology. His calculation of the pumping capacity of the heart is the first significant application of mathematics to biology. At the end of the 17th century, the scientific acceptance of his theory of the blood circulation and his results on circulation research led to the first administration of drugs via the veins (infusion, injection) and to the performance of blood transfers. With his work Exercitationes de Generatione Animalium (Exercises on the Origin of Animals), published in 1651, Harvey made significant contributions to embryology, Harvey was the first to not only describe successive stages of development, but to adopt a dynamic approach. Contrary to the preformation theory generally accepted at the time, he described how the various organs emerge from undifferentiated substance (epigenesis).

William Harvey died at Roehampton on 3 June 1657. Descriptions of the event seem to show that he died of a cerebral hemorrhage from vessels long injured by gout.