You are here: Home › physics › Jean Baptiste Perrin and the Brownian Motion 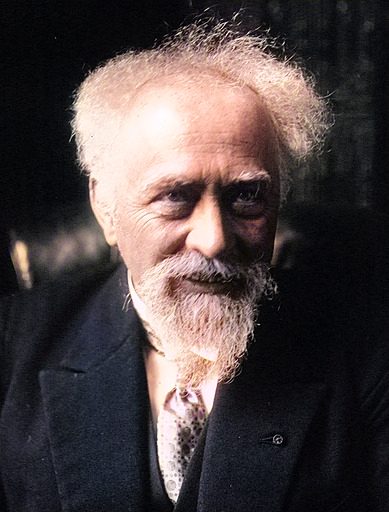 On September 30, 1870, French physicist Jean Baptiste Perrin was born. In his studies of the Brownian motion of minute particles suspended in liquids, Perrin verified Albert Einstein’s explanation of this phenomenon and thereby confirmed the atomic nature of matter.

Jean Baptiste Perrin was born in Lille, France, while his father, Captain Jean Baptiste Perrin, wounded at the battle of Saint-Privat, was locked up in Metz with the Army of the Rhine, before being taken prisoner by the Prussians. He returned from captivity in Germany in April 1871. He was made a knight of the Legion of Honor, retired in 1874 and went to Lyon where he died in 1880 at the age of 59. His son Jean was only 10 years old. Jean Perrin attended the École Normale Supérieure, the elite grande école in Paris. After graduating in 1894, he worked there as a research assistant and received his doctorate in 1897. He then moved to the Sorbonne and taught there as a professor from 1910 to 1940. After the German invasion, he fled to the United States, where he worked in New York City to establish a French university in exile, which resulted in the founding of the École libre des hautes études (ELHE), which later led to the founding of the École des hautes études en sciences sociales (EHESS) in Paris. Jean Perrin died at Mount Sinai Hospital in New York on 17 April, 1942 at the age of 71. His remains were transferred to France in 1948 by the warship Jeanne d’Arc and buried in the Panthéon.

Perrin’s first work, which began during his doctoral years, dealt with cathode rays and X-rays, showing, among other things, that cathode rays are negatively charged particles. Other work dealt with fluorescence, the decay of radium, and sound generation and propagation. Among other things, he developed the Perrin tube, with which he demonstrated the negative charge of cathode rays in a flawless manner for the first time. In addition, it can be used to determine the magnitude of the specific elementary charge.

His best-known work deals with the properties of colloids; by studying the Brownian motion of dissolved particles, he was able to confirm Albert Einstein’s calculations and predictions, according to which dissolved particles obey the gas laws. Through a precise analysis, he was also able to determine the Avogadro constant – the result was consistent with other determinations of the constant and was decisive evidence for the particle nature of matter.  In 1905, Albert Einstein had published his theoretical explanation of Brownian motion in terms of atoms.[6] Perrin then conducted experiments in order to test and possibly verify Einstein’s theory. Brownian motion or pedesis is the random motion of particles suspended in a liquid or a gas resulting from their collision with the fast-moving atoms or molecules in the gas or liquid. This transport phenomenon is named after the botanist Robert Brown. In 1827, while looking through a microscope at particles trapped in cavities inside pollen grains in water, he noted that the particles moved through the water. However, he was not able to determine the mechanisms that caused this motion. Atoms and molecules had long been theorized as the constituents of matter, and Albert Einstein published a paper in 1905 that explained in precise detail how the motion that Brown had observed was a result of the pollen being moved by individual water molecules.

Einstein’s first predictions were at first refuted by several scientists. However, Chaudesaigues (1908) and Perrin (1909) were able to confirm Einstein’s theory, which constituted empirical progress for the kinetic theory of heat. In essence, Einstein showed that the motion can be predicted directly from the kinetic model of thermal equilibrium. The importance of the theory lay in the fact that it confirmed the kinetic theory’s account of the second law of thermodynamics as being an essentially statistical law.

Jean Baptiste Perrin was awarded the Nobel Prize in Physics in 1926 “for his work on the discontinuous structure of matter, especially for his discovery of sedimentation equilibrium.” Perrin is considered the founding father of the National Centre for Scientific Research (Centre National de la Recherche Scientifique (CNRS)). Following a petition by Perrin signed by over 80 scientists, among them eight Nobel Prize laureates, the French education minister set up the Conseil Supérieur de la Recherche Scientifique (French National Research Council) in April 1933. In 1936, Perrin, now an undersecretary for research, founded the Service Central de la Recherche Scientifique (French Central Agency for Scientific Research).[8] Both institutions were merged under the CNRS umbrella on October 19, 1939.