You are here: Home › communication › Michael Pupin solving the Problems of long-distance Communication 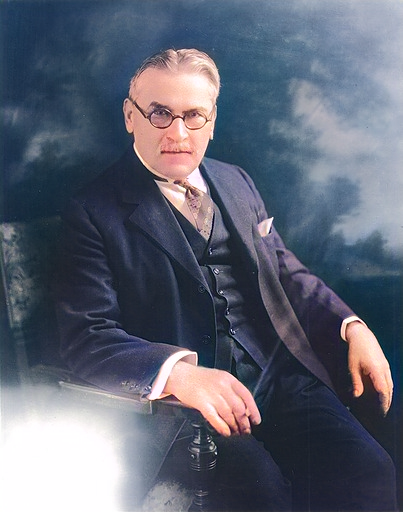 On October 9, 1858, Serbian American physicist and physical chemist Michael Pupin was born, who is best known for his numerous patents, including a means of greatly extending the range of long-distance telephone communication by placing loading coils (of wire) at predetermined intervals along the transmitting wire (known as “pupinization“).

“We would never get away from it. … It’s bad enough as it is, but with the wireless telephone one could be called up at the opera, in church, in our beds. Where could one be free from interruption?”
— Michael Idvorsky Pupin, New York Times (23 Jan 1910), Sunday Magazine Section, 6.

Mihajlo Idvorsky Pupin was born in the village of Idvor (in the modern-day municipality of Kovačica, Serbia) in Banat, in the Military Frontier in the Austrian Empire. In his youth, he served as a shepherd. His parents were illiterate, but Pupin was educated at the local school in Idvor. Later he went to Serbian Orthodox school, and later to German elementary school in Perlez. He enrolled in high school in Pančevo, and later in the Real Gymnasium. He was one of the best students there; a local archpriest saw his enormous potential and talent, and influenced the authorities to give Pupin a scholarship. Because of his activity in the “Serbian Youth” movement, which at that time had many problems with Austro-Hungarian police authorities, Pupin had to leave Pančevo. In 1872, he went to Prague to continue his education. Bur, when his father died in 1874, with the support of his parents but with very little money, he immigrated to the USA.[1]

Immigration to the U.S.

Like many poor immigrants, Pupin worked as a manual laborer. He drove mules, worked on farms, and was employed by a biquit factory while he learned English and saved what money he could. After three years of various courses, in the autumn of 1879 he successfully finished his tests and entered Columbia College, where he subsequently became the first holder of Columbia’s Tyndall fellowship in physics, and graduated with honors in 1883. He held the John Tyndall fellowship at the university and was president of his class. He became a U.S. citizen the day before graduation. Pupin then spent two years at Cambridge University and continued his education in 1885 at the University of Berlin, studying and conducting research in experimental physics under Hermann von Helmholtz [2]. He obtained his Ph.D. in Berlin in 1889 and returned to Columbia University to become a lecturer of mathematical physics in the newly formed Department of Electrical Engineering. 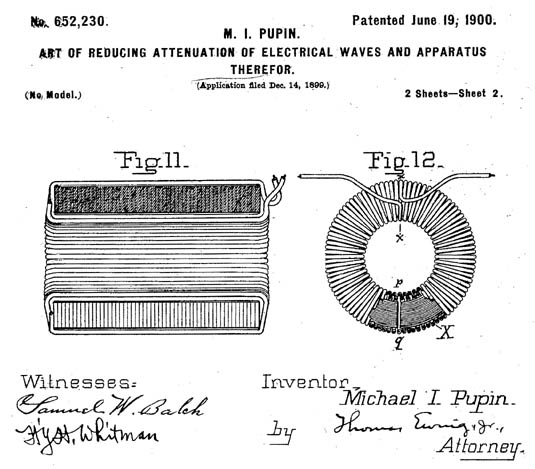 Though the department could make no claims to having the most modern or even sufficient equipment – the laboratory building was known as “the cowshed” – Pupin completed some of his most important work at Columbia. In 1894, he studied wave propagation in a vibrating string, noting that these waves did not dissipate as rapidly in a string which had weights suspended from it at equal intervals as in an un-weighted string. He applied this finding to long distance telephony, ascertaining the correct spacing of inductance (“loading”) coils along telephone lines to remove the barrier of distance from telephone communication. A loading coil or load coil is an inductor that is inserted into an electronic circuit to increase its inductance.

The concept of loading coils was discovered by Oliver Heaviside in studying the problem of slow signalling speed of the first transatlantic telegraph cable in the 1860s.[7] He concluded additional inductance was required to prevent amplitude and time delay distortion of the transmitted signal. The mathematical condition for distortion-free transmission is known as the Heaviside condition. Previous telegraph lines were overland or shorter and hence had less delay, and the need for extra inductance was not as great. Submarine communications cables are particularly subject to the problem, but early 20th century installations using balanced pairs were often continuously loaded with iron wire or tape rather than discretely with loading coils, which avoided the sealing problem.

Michael Pupin’s 1899 patent for loading coils, archaically called “Pupin coils”, followed closely on the pioneering work of the English physicist and mathematician Oliver Heaviside, which predates Pupin’s patent by some seven years. The importance of the patent was made clear when the American rights to it were acquired by American Telephone & Telegraph (AT&T), making him wealthy.

When Wilhelm Röntgen announced his discovery of x-rays in December 1895, Pupin made an x-ray tube and, within 2 weeks, discovered secondary x-radiation in 1896 and made the first x-ray photograph in the USA [4]. With the aid of a phosphorescent screen, furnished by his friend Thomas A. Edison, superimposed on a photographic plate, he was able to make good X-ray pictures requiring an exposure of only a fraction of a second, rather than that of an hour or more.

Michael Pupin also received the 1924 Pulitzer Prize in biography for his autobiographical work From Immigrant to Inventor (1923) [3]. Concern over the people in his native land led Pupin to an increasingly active role in public affairs during the Balkan War and World War I, and he headed many philanthropic and humanitarian efforts on behalf of other Serbs. Pupin published approximately 70 technical articles and reports during his lifetime, obtained 34 patents, and received many awards and distinctions. He died in New York City on March 12, 1935.[5]