You are here: Home › meteorology › Christophorus Buys Ballot and the Weather Systems 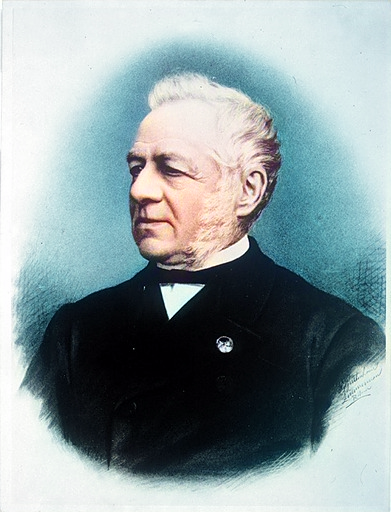 Christophorus Henricus Didericus Buys Ballot was the son of Anthony Jacobus Buys Ballot, pastor to Kloetinge and Geertruida Françoise Lix-Raaven, born in Kloetinge, Netherlands. He attended the Gymnasium at Zaltbommel, where he developed a special interest for mathematics and classical literature. In 1835, Buys Ballot immatriculated at the University of Utrecht, where he originally intended to study classical languages with lectures in Latin, Greek, and history, but soon his interest switched to natural sciences. In 1842, Buys Ballots first paper was published on Xylidine. After receiving his doctorate in 1844 with a thesis on cohesion and adhesion entitled “De Synaphia et Prosaphia“, he became lecturer in mineralogy and geology at Utrecht. In 1845, he tested the Doppler effect for sound waves by using a group of trumpet players playing a calibrated note on a train from Utrecht to Maarssen in the Utrecht-Amsterdam line. In 1846, he added theoretical chemistry to his teaching and research subjects. In 1847 he was appointed professor of mathematics and from 1867 until his retirement he was professor of physics

Buys Ballot is best known for his accomplishments in the field of meteorology, specifically the explanation of the direction of air flow in large weather systems. Buys Ballot’s law states that if a person in the Northern Hemisphere stands with his back to the wind, the atmospheric pressure is low to the left, high to the right. For the southern hemisphere the effect is simply reversed. As early as the 16th century extensive weather observations were included as part of a ship’s log. These observations as well as other log information, were turned over to national hydrographic institutes in various nations, most notably Germany and England and later also the US. The information from many ships about individual voyages was compiled ashore and later became what today is still published by England, a 3 volume set complete with charts titled “Sailing Directions for the World“. The information is the distillate of empirical observations of thousands of ships masters over thousands of voyages spanning several hundred years. Actually, Buys Ballot’s law was first deduced by the American meteorologists J.H. Coffin and William Ferrel, but published first by Buys Ballot it in the Comptes Rendus, November 1857, although Buys Ballot later acknowledged Ferrel’s priority.

While William Ferrel theorized this first in 1856, Buys Ballot was the first to provide an empirical validation based on the collected weather data. Buys Ballot failed to explain, as Ferrel had, that the law results from the deflecting force of the earth’s rotation.[3] Theoretically, the relationship states that the angle between the wind and the pressure gradient is a right angle. This is almost exactly true in the free atmosphere, but not near the surface. Near the ground, the angle is usually less than 90° because of friction between the air and the surface and the turning of the wind toward areas of lower atmospheric pressure at the same altitude. Because of the weakness of the Coriolis effect (produced by the Earth’s rotation) in equatorial regions, the law is not applicable there. Buys Ballot’s law first appeared in early versions (prior to 1900) of Bowditch’s American Practical Navigator and other publications written to assist in passage planning and the safe conduct of ships at sea and is still included today both in Bowditch and in Sailing Directions (see following reference) as an item of practical reference and information.

Furthermore, Buys Ballot founded the Royal Dutch Meteorological Institute (KNMI) in 1854, a world center for atmospheric research, and he remained its chief director until his death. He was one of the first to see the need for international cooperation, and in 1873 became the first chairman of the International Meteorological Organization, a precursor of the World Meteorological Organization (WMO). Buys Ballot’s main research effort in meteorology went into examining long-time series for regularities. He was more concerned with establishing the regularities than in explaining them. He made no contributions to the theory of meteorology which is perhaps surprising given his training in physics.

Buys Ballot devised a tabular method for investigating periodicity in time series. In 1847 he used the table now named after him to determine the period of the sun’s rotation from daily observations of temperature in the Netherlands from 1729 to 1846. Buys Ballot was a leader of the international meteorological cooperation that began with the Brussels Conference in 1853, and he served as chairman of the International Meteorological Committee from its founding at the Vienna Congress in 1873 until 1879. Buys Ballot became member of the Royal Netherlands Academy of Arts and Sciences in 1855. He was decorated by the Dutch, Austrian, and Prussian governments. As a teacher he wrote textbooks in chemistry, mathematics, and physics.[3] He died in the Dutch city of Utrecht in 1890.