You are here: Home › space › The Eagle has Landed – The First Man on the Moon

A stamp issued by the United States after Moon landing

On July 20, 1969 (for Western Europeans it was one day later, i.e. July 21, 3:56 MEZ) United States‘ space mission Apollo 11 reached the moon with the lunar module Eagle and the two astronauts Neil Armstrong [2] and Edwin “Buzz” Aldrin about 76 hours after they left earth from Kennedy Space Center in Florida., while Michael Collins stayed in orbit around the Moon piloting the command module.[4]

“Houston, Tranquility Base here. The Eagle has landed.” (Neil Armstrong)

Actually, the Apollo 11 mission is one of my earliest childhood memories. Not the landing itself, but I remember that my father and I were watching tv and there was a broadcast from the launch site. However, it was not the time for the launch and I had to go to bed. I remember that the next day, when I came home from kindergarden, the launch had already taken place and that I had missed it. I was so upset that I still remember these days 50 years after the event 😉

What once was only Science Fiction

What once was only science fiction had turned into reality. 6 hours after shutting down the engines on July 21 at 02:56 UTC Neil Armstrong opened the hatch of the Eagle landing craft and 20 minutes later he stepped out on the ladder towards the moon‘s surface and spoke the iconic sentence:

“one small step for [a] man, one giant leap for mankind” (Neil Armstrong) 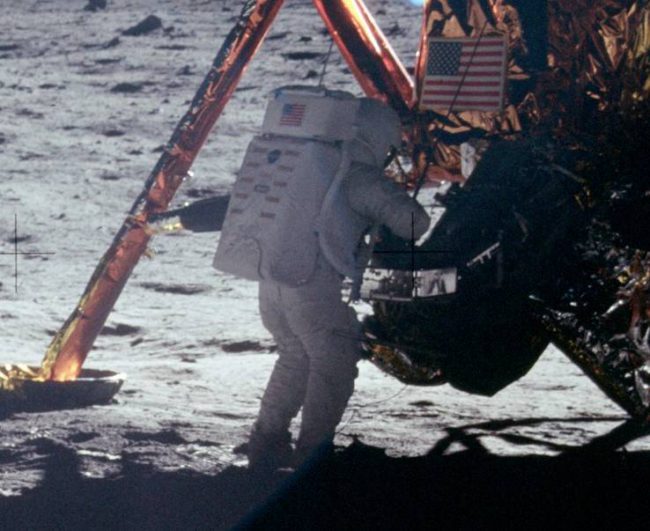 Apollo 11 launched at 13:32:00 UTC on July 16, 1969 at the tip of the 2940 ton Saturn V from Cape Canaveral, Florida, and reached Earth orbit twelve minutes later as scheduled. After one and a half orbits, the third rocket stage was re-ignited. It burned for about six minutes and set the Apollo spacecraft on moon course. A short time later the Command/Service Module (CSM) was coupled to the Lunar Module. The entire outward flight to the moon, which was about 384,403 kilometres away, took 76 hours without any special incidents. The astronauts swung on 19 July 1969 at 17:22:00 UTC by a braking maneuver over the back of the moon into a moon orbit.

Landing on the Moon

In the moon orbit Aldrin and one hour later Armstrong changed to the lunar module. After checking the systems and unfolding the landing legs of the ferry, they separated it from the mother ship, in which Collins remained, and initiated the descent sequence. Heikel was then the approach to the target area in the Mare Tranquillitatis. Due to minor unintended changes in the runway during uncoupling, the on-board computer aimed at a point about 4.5 kilometres behind the planned landing area. During the approach, the crew’s attention was also drawn several times by alarms from the navigation computer about 1.5 kilometres above the ground, so that Armstrong could not pay as much attention to the characteristic features of the lunar landscape as the flight plan had intended. 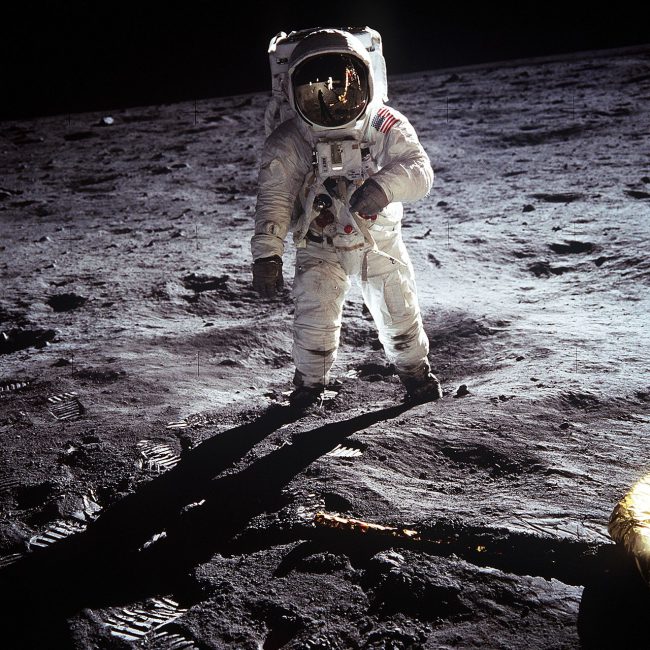 Astronaut Aldrin on the moon

The Most Historic Telephone Call Ever Made

Armstrong spent his first few minutes on the Moon taking photographs and soil samples in case the mission had to be aborted suddenly. He was joined by colleague Buzz Aldrin and the two astronauts collected data and performed various exercises – including methods for moving around such as two-footed kangaroo hops – before planting the Stars and Stripes flag into the lunar soil. When Buzz Aldrin joined Armstrong on the surface, he had to make sure not to lock the Eagle’s door because there was no outer handle. After filming their experience with a portable television camera the astronauts received a message from the US President Nixon in the White House, who spoke of the pride of the American people and said:

“This certainly has to be the most historic telephone call ever made.” (Richard Nixon)

Neil Armstrong and Edwin Aldrin spent a total of 21 hours on the Moon, two-and-a-half of them outside the landing module. They collected 21 kilograms (47 pounds) of surface material to be returned to Earth for analysis. BTW, did you know that the Apollo computers had less processing power than your cellphone?

The “small Step” that wasn’t so small

One small step for man, one giant leap for mankind broadcasted via TV to a world-wide audience. Despite some technical and weather difficulties, ghostly black and white images of the first lunar EVA were received and broadcast to at least 600 million people on Earth. The historic moments were captured on television cameras installed on the Eagle and turned on by Armstrong. Actually, the “one small step for man” wasn’t that small. Armstrong set the ship down so gently that its shock absorbers didn’t compress. Therefore, he had to hop more than 1 meter (3.5 feet) from the Eagle’s ladder to the surface. 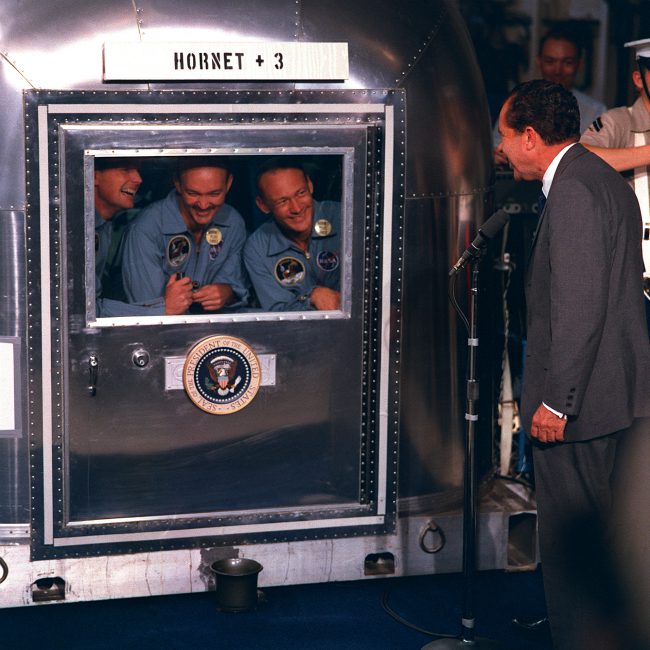 There and Back Again

The launch of the Lunar Module succeeded without any problems, the ferry swung into a moon orbit and docked almost four hours later back to the command capsule. After Armstrong and Aldrin had switched to Collins, the lunar ferry was repelled and the Apollo spacecraft was brought back to earth again. On 24 July 1969 at 16:50 UTC, the capsule washed in the Pacific south of the Johnston Atoll and was taken on board by the USS Hornet salvage vessel with the help of Helicopter 66. Fearing unknown microorganisms, the three astronauts left the Apollo landing capsule wearing completely closed suits to insulate themselves from the outside and were quarantined for seventeen days until all concerns had been resolved. On August 13, the three astronauts rode in ticker-tape parades in their honor in New York and Chicago, with an estimated six million attendees