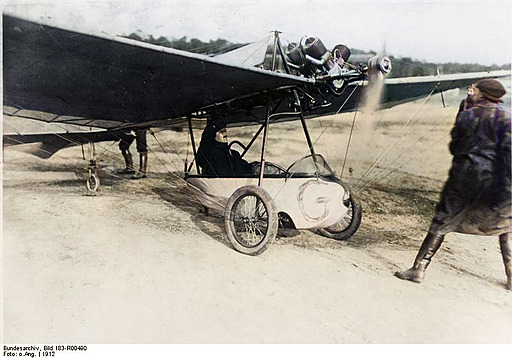 On October 30, 1909, German aviation pioneer Hans Grade won the 40.000 Reichsmark “Lanz-Preis der Lüfte“, flying a new monoplane design, the ‘Libelle’ (Dragon Fly), the first really airworthy motor plane of Germany. Most probably, you have never heard of Hans Grade, who is also scarcely known in his home country. Nevertheless, he is one of the early pioneers of aviation and today, we will tell his story.

Hans Grade was born on May 17, 1879, in Köslin, the largest city of Middle Pomerania in today’s north-western Poland. Working as a trainee in mechanical engineering in Grevenbroich, Cologne, he studied engineering at the Technische Hochschule in Charlottenburg, Berlin from 1900 to 1904. In 1903, Grade designed and constructed his first motorbike in Köslin and took over an engine workshop. In 1905, he founded the Grade-Motoren-Werke GmbH in Magdeburg.

After joining the Magdeburg pioneer battalion in 1907, he began building his first three-decker aircraft with a six-cylinder two-stroke engine and made his first flight on 28 October 1908 at the Cracauer Anger in Magdeburg. At a height of about eight metres, he overcame 100 metres on the flight. The flight ended with a crash landing. Until May 1909, Grade undertook about 70 flights with a maximum flight length of about 700 m, about which the international trade press also reported.

On August 14, 1909 Grade moved his workshop to Bork, today’s Borkheide. After only three days he took the first flight with his monoplane “Libelle”, still developed in Magdeburg, on August 17, 1909 in Bork. The first flights were scarcely more than hops, but by November, 1909, he had logged one journey of 55 minutes duration.

Attempting to win the “Lanz Prize of the Air”, he crashed into a pine forest on 26 September 1909 due to the break of the propeller. He survived the incident unharmed and won the 40,000 gold mark prize on 30 October 1909 at Johannisthal airfield, for the first German to fly a flat “8” in a German aircraft with German engine around two pylons 1000 meters apart, no match for pilots from other nations at that time.

Afterwards he undertook show flights in Hamburg, Bremen, Breslau and Magdeburg. In 1910 Grade built an aircraft factory in Bork and founded the first flight school in Germany. Both were in operation until 1914. 80 airplanes were built and around 130 pupils were trained. Grade was one of the first German motor pilots. His pilot’s license from 1 February 1910, issued by the Luftschiffer-Verband Berlin, bears the number 2. On April 10, 1910, Grade sets an altitude record in Magdeburg of 1450 meters and in 1912 he was awarded The Crown Medal 4th class by the German Emperor.

It was also a Grade monoplane that carried Germany’s first air mail, when pilot Pentz made a flight from Bork to Bruck in February 1912 with a small sack of mail in his lap. To finance the flight, own stamps had been issued. The flight is seen as the first airmail transport in Germany. He made his first attempt with the first seaplane on August 21, 1912 in Blankensee near Trebbin. In 1913 Hans Grade built the first aircraft suitable for inverted flight. From 1914 onwards he was mainly engaged in the repair of war planes and developed a tractor.

Although successful, Grade monoplanes did not become as famous as many contemporary European designs, and for this reason comparatively few were built. The small aircraft company, founded with his prize money, did not survived the Versaille-agreement of 1918. His extraordinary construction of driving a car with no use of a gear-box did not stand against the established constructions.

In 1921 he established an automobile company called “Grade Automobilwerke AG“, which produced small, 2 seater personal cars. Until 1927 up to 2000 cars were produced. Up to 800 workers were employed in Grades Automobilwerk. The Grade Automobilwerke AG was closed in 1927 owing to financial difficulties. After the Nazi takeover in the 1930s Grade tried, without success, to develop a new Volksflugzeug and in 1934 he undertook research projects for the German aircraft manufacturers. In 1939 May 14 he re-flew his original monoplane from 1909, then 30 years old, at Berlin Tempelhof Airport for about 550 metres to celebrate his sixtieth birthday.

After the Second World War he was temporarily expropriated, but received his entire property back before his death. Hans Grade died in 1946 at the age of 67.