You are here: Home › physics › Donald Kerst and the Betatron 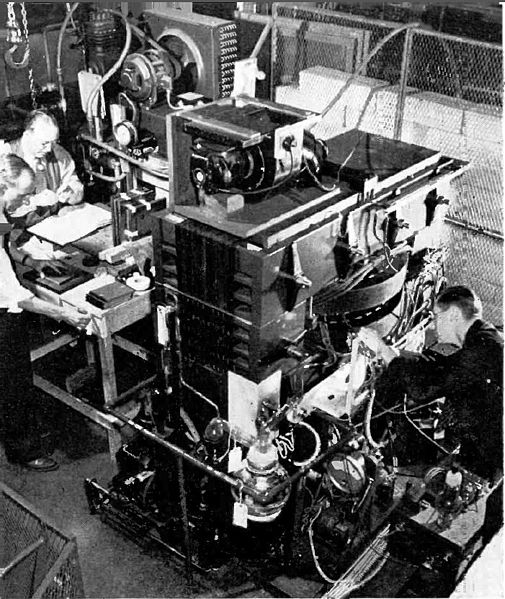 The first betatron, a particle accelerator that accelerates electrons, built at University of Illinois in 1940 by Donald W. Kerst

Donald Kerst was born in Galena, Illinois, U.S., the son of Herman Samuel Kerst and Lillian E Wetz. He studied at the University of Wisconsin, earning a bachelor’s degree in 1934 and a Ph.D. in 1937 for his thesis on “The Development of Electrostatic Generators in Air Pressure and Applications to Excitation Functions of Nuclear Reactions“. This work involved building and testing a 2.3 MeV generator for experiments with the scattering of protons. At General Electric Company, Donald Kerst then worked on the development of x-ray tubes and machines. However, since x-ray research required high energies that could not be produced at the time, Kerst found this work rather frustrating.

The first functional betatron was developed in 1935 by Max Steenbeck in the research laboratory of Siemens-Schuckertwerke Berlin, but was initially kept secret and not pursued further because of other priorities. Meanwhile, at the University of Illinois at Urbana Champaign, Donald Kerst was encouraged by F. Wheeler Loomis, back then head of the physics department, to create a better particle accelerator. The result was the betatron particle accelerator which became operational on July 15, 1940. Donald Kerst then also became the first known person to accelerate electrons using electromagnetic induction, reaching energies of 2.3 MeV. Kerst is therefore considered today to be the inventor of the betatron, but in his publication in Physical Review he also referred explicitly to Rolf Wideröe, who had already had the idea for the betatron in the 1920s. He did not mention Steenbeck’s work, although he must have been aware of it through General Electric’s collaboration with Siemens.

How to name it?

Before the betatron was actually named, the colleagues of Kearst suggested the German term “Ausserordentlichhochgeschwindigkeitelektronenentwickelndenschwerarbeitsbeigollitron“. In 1941, Kerst decided on betatron, using the Greek letter “beta”, which was the symbol for electrons, and “tron” meaning “instrument for”. The betatron was a major success and was used in particle physics experiments to provide high-energy beams of electrons. A small version of a betatron was also used to provide a source of hard X-rays for prompt initiation of some experimental nuclear weapons by means of photon-induced fission and photon-neutron reactions in the bomb core.

Subsequently, under his direction (at Illinois, Los Alamos, at General Electric), further betatron models of increasing power were developed, most recently up to 300 MeV (University of Illinois).The Radiation Center, the first private medical center to treat cancer patients with a betatron, was opened by Dr. O. Arthur Stiennon in a suburb of Madison, Wisconsin in the late 1950s. From 1953 to 1957, as technical director of the Midwestern Universities Research Association (MURA), Kerst introduced more advanced concepts for particle acceleration. Later, he worked on problems in plasma physics, specifically the control of fusion reactors. There he collaborated with Tihiro Ohkawa and invented toroidal devices for containing the plasma with magnetic fields. Their devices were the first to contain plasma without the instabilities that had plagued previous designs, and the first to contain plasma for lifetimes exceeding the Bohm diffusion limit.

From 1957 to 1962 he worked for General Dynamics at their nuclear laboratory (General Atomic Laboratory, now part of General Atomics) in La Jolla. He then taught as a professor at the University of Wisconsin until his retirement in 1980.[1] From 1972 to 1973 he was chairman of the plasma physics section of the American Physical Society.