You are here: Home › physics › Max von Laue and the Diffraction of X-Rays in Crystals 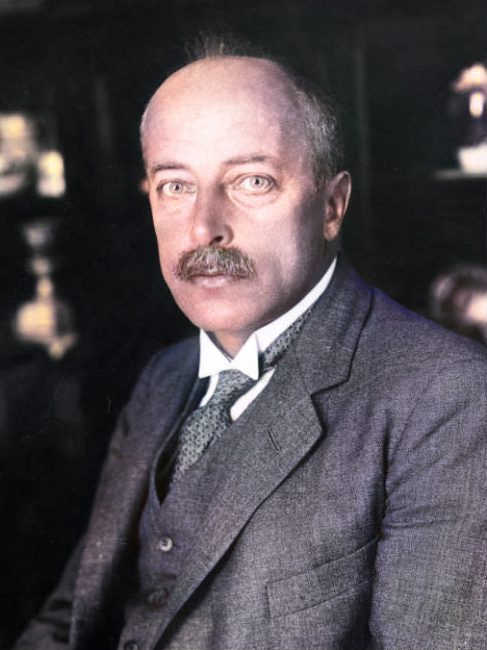 On October 9, 1879, German physicist Max von Laue was born. Von Laue received the Nobel Prize in Physics in 1914 for his discovery of the diffraction of X-rays by crystals.

Max von Laue was born in Pfaffendorf, near Koblenz, Germany. His parents were Julius Laue (1848-1927), a Prussian real secret war councilor and military director in Berlin, who was raised to the nobility in 1913, and his wife Wilhelmine Zerrenner (1853-1899). Von Laue studied physics and mathematics at the universities of Strasbourg, Göttingen, Munich and Berlin from 1898. In 1903 he received his doctorate under Max Planck in Berlin [3] on the theory of interference on plane-parallel plates, passed his state examination for teaching in Göttingen in 1905, and in the same year took on an assistant position under his doctoral supervisor in Berlin. After his habilitation in 1906, he worked on Albert Einstein‘s theory of relativity,[1] and in 1907, by applying the relativistic addition theorem, he was able to interpret the Fizeau experiment in terms of the theory of relativity. In 1909 he joined Arnold Sommerfeld as a private lecturer at the Institute for Theoretical Physics at the Ludwig-Maximilians-Universität in Munich.[2] Other important contributions to the theory of relativity included the fact that there were no rigid bodies, considerations of relativistic dynamics and the twin paradox. He also wrote one of the first textbooks on special and general relativity.

Diffraction of X-Rays on Crystals

In 1912, together with Walter Friedrich and Paul Knipping, he discovered the diffraction of X-rays on crystals. This proved that X-rays propagate like a wave. In addition, it was possible for the first time to draw conclusions about the crystal structure from the diffraction patterns. For his work von Laue received the Nobel Prize for Physics in 1914. In October of the same year, he was appointed to the chair of theoretical physics at the newly founded University of Frankfurt am Main. In 1919 von Laue returned as professor to the University of Berlin, where he extended his original geometric theory of X-ray interference to the so-called dynamic theory. Also in 1919, he began working at the Kaiser Wilhelm Institute of Physics, where he took over the position of deputy director in 1922, representing Albert Einstein.

In 1921 he was honored with the Adolf-von-Baeyer memorial coin and in 1932 with the Max Planck Medal. From 1925 to 1929, he was a member of the senate of the Kaiser Wilhelm Society for the Promotion of Science (KWG). During the rule of National Socialism, he stood up for Albert Einstein and against German physics (for example, already at the meeting of the German Physical Society in Berlin in September 1933). In 1940 he put himself in danger when he conspiratorially informed Edna Carter in the United States by postcard that Fritz Houtermans had “surfaced” (been released from Gestapo custody). In it, he lightly coded a request to Carter to forward the joyful news to his wife Charlotte Houtermans at Vassar College, who was prematurely retired in 1943. He then wrote a history of physics, which later appeared as a book. At the end of the war, he was interned by the British as part of Operation Epsilon at Farm Hall and then in the Albersmeyer house in Alswede.

When German troops occupied the Danish capital of Copenhagen in April 1940 during World War II, Hungarian chemist George de Hevesy, working in Niels Bohr’s laboratory, dissolved the gold Nobel Prize medals of German physicists Max von Laue and James Franck in Königswasser to prevent the Nazis from gaining access. Von Laue and Franck were in opposition to National Socialism and had entrusted their medals to Niels Bohr to prevent confiscation in Germany;[4] the Hitler government forbade all Germans to accept or wear the Nobel Prize after Carl von Ossietzky had been awarded the Nobel Peace Prize in 1935.[6] After the end of the war, de Hevesy extracted the gold dissolved in aqua regia and handed it over to the Royal Swedish Academy of Sciences, which made new medals from it and gave them back to von Laue and Franck.

After the end of the war, he became an honorary professor at the University of Göttingen and took an active part in the reorganization of the German academic world. From 1946 to 1949 he was chairman of the newly founded German Physical Society in the British Zone. He participated in the merger of the Physical Societies in West Germany to form the Association of German Physical Societies and in the founding of the Physikalisch-Technische Bundesanstalt in Braunschweig. In 1951 von Laue became director at the Fritz Haber Institute of the Max Planck Society in Berlin-Dahlem. In 1952, he received the X-ray plaque of the city of Remscheid and was appointed to the Order Pour le Mérite for Science and Arts. The Technical University of Berlin awarded him an honorary doctorate in 1953, and the Free University of Berlin made him an honorary citizen in 1958. On April 12, 1957, he was one of the signatories of the Göttingen Declaration against the planned nuclear armament of the German armed forces. The Institut Laue-Langevin in Grenoble bears his name. Shortly before his death, the Max-von-Laue-Gymnasium in Koblenz was named after him. From 1959 to 1960 he was a member of the advisory board of the Friedrich Naumann Foundation.

On 8 April 1960, while he was driving to his laboratory, Laue’s car was struck in Berlin by a motorcyclist, who had received his license only two days earlier. The motorcyclist was killed and Laue’s car was overturned. He died from his injuries sixteen days later on 24 April. at age 80.

Stephen Curry, Seeing Things in a Different Light: How X-ray crystallography revealed the structure of everything, [10]