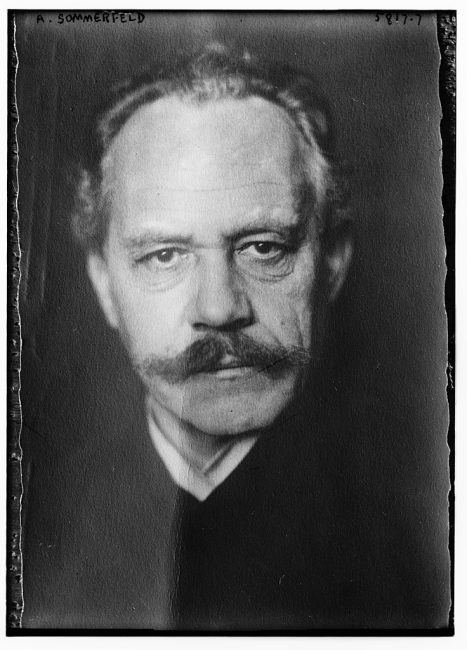 “What we hear today from the language of the spectra is a real music of the spheres of the atom, a resonance of integer relationships, an increasing order and harmony in all its diversity. For all time, the theory of spectral lines will bear the name Bohrs. But another name will be permanently associated with it, the name of Planck. All integer laws of spectral lines and atomistics ultimately flow from quantum theory. It is the mysterious organon on which nature plays spectral music and according to whose rhythm it regulates the construction of atoms and nuclei.”
– Arnold Sommerfeld, Atomic Structure and Spectral Lines. 1919

Arnold Sommerfeld was born in Konigsberg located in the Province of East Prussia, today Kaliningrad, Russia, to Franz Sommerfeld, a medical doctor who came from a leading Königsberg family. He attended high school from 1875-1886 at Altstädtisches Gymnasium, Königsberg and was educated in mathematics as well as physics at Konigsberg’s Albertina University. For his dissertation, he was under his advisor Ferdinand von Lindemann, who was a renowned mathematician. Apart from being taught by Ferdinand von Lindemann, he also had exposure to lectures given by the mathematicians David Hilbert [1] and Adolf Hurwitz, and Emil Wiechert, a known physicist. He was 23 when he received his Ph.D in 1891.

The Theory of the Gyroscope

After receiving his doctorate, Sommerfeld remained at Königsberg to work on his teaching diploma. He passed the national exam in 1892 and after having completed his obligatory military service he continued for the next eight years voluntary eight-week military service. Sommerfeld went to the University of Göttingen, which was the center of mathematics in Germany, where he became assistant to Theodor Liebisch, at the Mineralogical Institute. In 1894, Sommerfeld was given the chance to be assistant of mathematician Felix Klein,[5] known for his works on non-Euclidean geometry and complex analysis, among others. Sommerfeld’s Habilitationsschrift was completed while he was working under Klein in 1895, which allowed him to be one of the Privatdozents of Gottingen.[2] Starting in 1895-96, Klein and Sommerfeld began a 13 year long mathematical alliance, which resulted in a four volume text ‘Die Theorie des Kreisels’ (The theory of the gyroscope). The compilation dealt with theory of rotating bodies and application of mathematical theory to geophysics, astronomy and technology.[3]

At Klein’s request, Sommerfeld took on the position of editor of Volume V of Encyklopädie der mathematischen Wissenschaften; (Encyclopaedia of Mathematical Sciences) it was a major undertaking which lasted from 1898 to 1926. After an appointment to the Chair of Applied Mechanics at the Königliche Technische Hochschule Aachen, Sommerfeld established himself as ordinarius professor of physics and director of the new Theoretical Physics Institute at the University of Munich in 1906. Up until the late 19th century and early 20th century, experimental physics in Germany was considered as having a higher status within the community. However, in the early 20th century, theorists, such as Sommerfeld at Munich and Max Born at the University of Göttingen,[6] with their early training in mathematics, turned this around so that mathematical physics, i.e., theoretical physics, became the prime mover, and experimental physics was used to verify or advance theory.

Sommerfeld had to find his own way of teaching theoretical physics. He often chose contemporary problems as subject matter for lecture courses. It took several years before Sommerfeld’s haphazard lectures gradually turned into a regular six-semester sequence of lectures, which was later considered as canonical for teaching theoretical physics. He also granted considerable freedom to his students to pursue their own research interests for doctoral theses. The topics ranged from turbulence in a river to wireless telegraphy and often involved both experimental and theoretical investigations with uncertain prospects of success.[4]

Four of Sommerfeld‘s doctoral students, Werner Heisenberg, Wolfgang Pauli, Peter Debye, and Hans Bethe went on to win Nobel Prizes. Three of Sommerfeld‘s postgraduate students, Linus Pauling, Isidor I. Rabi and Max von Laue, won Nobel Prizes, while many others became famous in their own right. While at Munich, Sommerfeld came in contact with the special theory of relativity by Albert Einstein, which was not yet widely accepted at that time. His mathematical contributions to the theory helped its acceptance by the skeptics. Furthermore, he became one of the founders of quantum mechanics; some of his contributions included co-discovery of the Sommerfeld–Wilson quantization rules (1915), a generalization of Bohr‘s atomic model, introduction of the Sommerfeld fine-structure constant (1916), co-discovery with Walther Kossel of the Sommerfeld–Kossel displacement law (1919), and publishing Atombau und Spektrallinien (Atomic Structure and Spectral Lines,1919), which became the “bible” of atomic theory for the new generation of physicists who developed atomic and quantum physics.

…but no Nobel Prize

It has long been a subject of debate why Sommerfeld was not awarded the Nobel Prize. For more than a decade after he had published his monumental paper “On the Quantum Theory of Spectral Lines” in 1916, Sommerfeld was nominated almost regularly for the Nobel Prize. Actually, he was nominated for the Nobel Prize 84 times, more than any other physicist. There were rumors that he was turned down because of “rivalry with Bohr,” as Sommerfeld confided in a letter to a close colleague. Sommerfeld was known for his strong national feelings during and after World War I, but he was cured from nationalism when he experienced the National Socialists’ rise to power. After his retirement in 1935, the succession of Sommerfeld’s chair turned into a tug-of-war with an anti-Semitic faction of fanatics, who regarded modern theoretical physics as Jewish.[4] As an eminent scientist, Sommerfeld was conferred with many awards and honurs throughout his life. He was a member of the prestigious ‘Royal Society of London’, ‘Indian Academy of Sciences’, ‘Russian Academy of Sciences’ and the ‘United States National Academy of Sciences’.

Arnold Sommerfeld died in an automobile accident in Munich on the 25th of April in 1951, at age 82.