You are here: Home › mathematics › Maurice René Fréchet and the Theory of Abstract Spaces 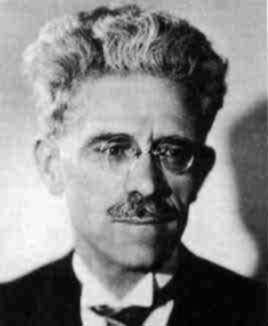 On September 2, 1878, French mathematician Maurice René Fréchet was born. Fréchet is known chiefly for his contribution to real analysis. He is credited with being the founder of the theory of abstract spaces, which generalized the traditional mathematical definition of space as a locus for the comparison of figures; in Fréchet‘s terms, space is defined as a set of points and the set of relations. He also made several important contributions to the field of statistics and probability, as well as calculus. His dissertation opened the entire field of functionals on metric spaces and introduced the notion of compactness.

Maurice Fréchet was born to a Protestant family in Maligny, Yonne, France, to Jacques Fréchet, a director of a Protestant orphanage in Maligny and later a head of a Protestant school, and his wife Zoé. After his father lost his job since the newly established Third Republic in France demanded all education to be secular, his mother set up a boarding house for foreigners in Paris. Maurice Fréchet attended the secondary school Lycée Buffon in Paris where he was taught mathematics by Jacques Hadamard,[4] who recognised the potential of Fréchet and tutored him on an individual basis.

In 1900, he enrolled to École Normale Supérieure to study mathematics. He started publishing quite early, having published four papers in 1903. Seven further papers appeared in 1904, then remarkably eleven papers in 1905 as he undertook research for his doctorate under Hadamard’s supervision. There are different ways that people make major contributions to the progress of mathematics, some by solving the big questions, others by proposing new areas for research. Fréchet recognised himself that he fell into the latter category. In 1906 Fréchet wrote an outstanding doctoral dissertation Sur quelques points du calcul fonctionnel, where he started a whole new area with his investigations of functionals on a metric space and formulated the abstract notion of compactness, although he did not invent the name ‘metric space’ which is due to Hausdorff.[1,7] The resulting abstract spaces (such as metric spaces, topological spaces, and vector spaces) are characterized by their particular elements, axioms, and relationships. In particular, Fréchet devised a method of applying the notion of limits from calculus to the treatment of functions as elements of a vector space and a way of measuring lengths and distances among the functions to produce a metric space, which led to the profoundly fruitful subject now known as functional analysis.[2] The importance of the thesis is that it develops axiomatic analysis systems providing an abstraction of different objects studied by analysis in a similar way to group theory providing an abstraction of algebraic systems.[1]

Academic Work and World War I

From 1907–1908 he served as a professor of mathematics at the Lycée in Besançon, then moved in 1908 to the Lycée in Nantes to stay there for a year. After that he served at the University of Poitiers between 1910–1919. Fréchet had arranged to spend the academic year 1914-15 at the University of Illinois at Urbana in the United States and had accepted an appointment there for one year. He and his family were packed and ready to travel to the port to board their ship for the United States when World War I broke out and Fréchet was required for military service.[1]

At 1914 he was mobilised and because of his language skills was attached to the British Army as an interpreter. For the period of the war Fréchet retained his post at the Faculty of Science in Poitiers despite not being able to teach there. However before he was released from military service at the end of the war, he was selected to go to Strasbourg to assist with re-establishing the university there. He was both professor of higher analysis at the University of Strasbourg and Director of the Mathematics Institute there from 1919 to 1927.[1]

Fréchet’s book Les espaces abstraits was published in 1928. It is devoted almost exclusively to his work on general topology. Fréchet’s early influence as the pioneer of an effective theory of topology in abstract spaces was substantial, but in time his influence was superseded by that of Hausdorff, whose book became an important resource for students and scholars.[3] Although he published prolifically in the 1930s on probability and statistics, bringing functional analysis to bear, his contributions in these fields did not match in originality and importance his early work on topology and general analysis. Fréchet also introduced the concepts of uniform convergence and consistency. It was also Fréchet who was the first to use the term Banach space in 1928, whereby he called the lp sequence spaces Banach spaces at that time.

Despite his major achievements, Fréchet was not overly appreciated in France. As an illustration, while being nominated numerous times, he was not elected a member of the Academy of Sciences until the age of 78 in 1956. He was in correspondence with many important mathematicians, including the Russian mathematicians Nikolai Nikolayevich Lusin, Pavel Aleksandrov and Urysohn, with Frigyes Riesz, L. E. J. Brouwer, and with Polish mathematicians such as Waclaw Sierpinski and Kazimierz Kuratowski. He was a chevalier of the Légion d’Honneur, was elected to the Polish Academy of Sciences in 1929, and was an honorary member of the Royal Society of Edinburgh and a member of the International Institute of Statistics.