You are here: Home › mathematics › Felix Hausdorff and the Basic Principles of Set Theory 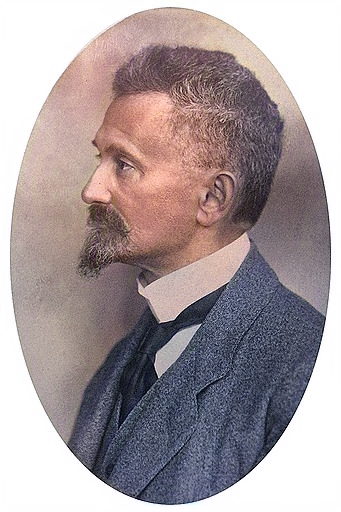 On November 8, 1868, German mathematician Felix Hausdorff was born. He is considered a co-founder of general topology and made significant contributions to general and descriptive set theory, measure theory, functional analysis and algebra. In addition to his profession, he also worked as a philosophical writer and literary figure under the pseudonym Paul Mongré.

Felix Hausdorff was born in Breslau, Kingdom of Prussia, today Wroclaw in Poland. Hausdorff’s father, the Jewish businessman Louis Hausdorff (1843-1896), moved with his young family to Leipzig in autumn 1870. His mother Hedwig (1848-1902) came from the widely ramified Jewish family Tietz. From 1878 onwards, Felix Hausdorff attended the Nicolai Grammar School in Leipzig, an institution which had an excellent reputation as a plantation of humanistic education.  In his graduation in 1887, he was the only one who reached the highest grade. From 1887 to 1891, Hausdorff studied mathematics and astronomy, mainly in his hometown Leipzig, interrupted by visiting semesters in Freiburg and Berlin. In the final semesters of his studies, Hausdorff closely followed Heinrich Bruns (1848-1919). Bruns was professor of astronomy and director of the observatory at the University of Leipzig. Hausdorff received his doctorate from him in 1891 with his thesis Zur Theorie der astronomischen Strahlenbrechung über die Refraktion des Lichtes in der Atmosphäre (On the theory of astronomical refraction on the refraction of light in the atmosphere). In 1895 earned his habilitation with a thesis on the extinction of light in the atmosphere. In the period between his doctorate and his habilitation, Hausdorff completed his one-year voluntary military service and worked for two years as a computer at the Leipzig observatory.

With his habilitation, Hausdorff became a private lecturer at the University of Leipzig and began an extensive teaching career in a wide range of mathematical fields. Besides teaching and research in mathematics, he pursued his literary and philosophical inclinations. The years 1897 to about 1904 mark the peak of his literary and philosophical work; during this period, 18 of the 22 writings published under pseudonyms appeared, including a volume of poetry, a play, a book critical of knowledge and a volume of aphorisms. His preferred pseudonym was Paul Mongré (à mon gré means: as I wish, as I like it)

In December 1901 Hausdorff was appointed extraordinary professor at the University of Leipzig. However, his main field of work soon became set theory, especially the theory of ordered sets. It was initially a philosophical interest, which led him to study Georg Cantor‘s work around 1897.[1] Already in 1901 Hausdorff gave a lecture on set theory. This lecture already contained Hausdorff’s first discovery in set theory: the type class of all countable order types has the power of the continuum. In the summer semester of 1910, Hausdorff was appointed as a regular associate professor at the University of Bonn. In the summer of 1912 work also began on his opus magnum, the book Grundzüge der Mengenlehre (Basic Principles of Set Theory), which was published in 1914. Hausdorff was appointed full professor at the University of Greifswald for the summer term of 1913. This university was the smallest of the Prussian universities.

Of fundamental importance for the entire theory is the concept of confinement introduced by Hausdorff. An ordinal number is called regular if it is not confinal with any smaller ordinal number, otherwise it is singular. Hausdorff’s question whether there are regular initial numbers with a limit number index was the starting point for the theory of unattainable cardinal numbers. Hausdorff had already noticed that such numbers, if they exist, must be of “exorbitant size”.

When the Nazi party came to power, Hausdorff thought that the university professor he was would not be worried. However, his mathematical work was denounced as “Jewish”, useless and “non-German”, and he lost his position in 1935. On 31 March 1935 Hausdorff was finally granted regular emeritus status after some back and forth. Those responsible at the time could not find a word of thanks for 40 years of successful work in the German higher education system. He continued to work tirelessly and, in addition to the extended new edition of his Set Theory, published seven papers on topology and descriptive set theory, all of which appeared in Polish journals: one in Studia Mathematica, the others in Fundamenta Mathematicae.

In 1939, Hausdorff attempted in vain to obtain a research fellowship in the USA via the mathematician Richard Courant in order to be able to emigrate after all. Finally, in mid-1941, work began on deporting the Bonn Jews to the convent “Zur ewigen Anbetung” in Bonn-Endenich, from which the nuns had been expelled. From there they were later transported to the extermination camps in the East. After Felix Hausdorff, his wife and his wife’s sister Edith Pappenheim, who lived with them, had received the order to move to the Endenich camp in January 1942, they died together on 26 January 1942 after taking an overdose of Veronal.