You are here: Home › astronomy › The underused Talents of Mary Somerville, Mathematician and Astronomer 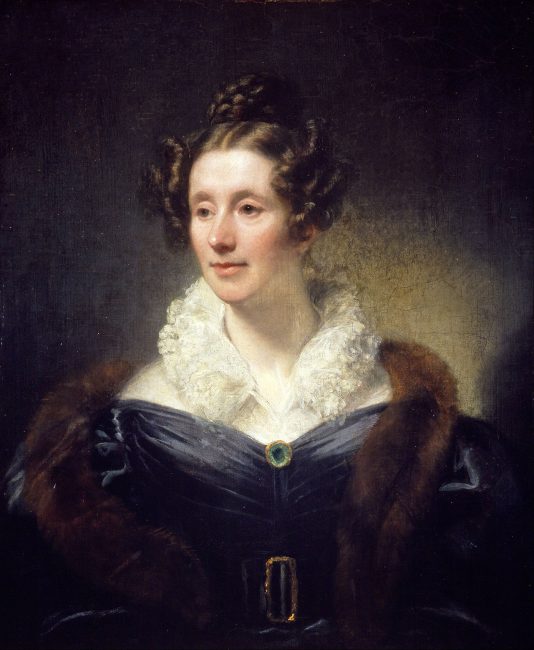 On December 26, 1780, Scottish science writer and polymath Mary Somerville was born. She studied mathematics and astronomy, and was nominated to be jointly the first female member of the Royal Astronomical Society at the same time as Caroline Herschel.[1] The word scientist was coined for her. Mary Somerville acquired her knowledge autodidactically and became well known as a science writer.

“Astronomy affords the most extensive example of the connection of physical sciences. In it are combined the sciences of number and quantity, or rest and motion. In it we perceive the operation of a force which is mixed up with everything that exists in the heavens or on earth; which pervades every atom, rules the motion of animate and inanimate beings, and is a sensible in the descent of the rain-drop as in the falls of Niagara; in the weight of the air, as in the periods of the moon.”
— Mary Fairfax Greig Somerville, On the Connexion of the Physical Sciences (1858), 1

Mary Fairfax Greig Somerville was born in her mother’s sister’s house, the rectory in Jedburgh, Scotland. She was the daughter of Admiral Sir William George Fairfax and was much in travel. When her father discovered that his daughter could barely read and write at the age of nine, the only formal schooling she received was a year at boarding school. Later, only her uncle encouraged her to study. She taught herself Latin and ancient Greek. His son William Somerville, medical inspector of the army (1771-1860), became Mary Somerville’s second husband in 1812. When her first husband died in 1806, the inheritance enabled her to pursue her scholarly interests. She maintained close contact with intellectual circles, including Walter Scott, Henry Brougham, and John Playfair. Playfair referred Greig to his student William Wallace for her studies. Wallace edited, among other publications, the journal Mathematical Repository, in whose mathematical prize problems Greig participated. She received a medal for one solution, the first of many awards.

William Somerville, whom she married in 1812 and with whom she had four children, was a staunch supporter of her scientific work. In 1816 the family moved to London and became part of social and scientific life. In 1835 she received a pension of 300 pounds from the government. With her family, Mary Somerville moved to Italy in 1838, where she spent most of her life from then on (first in Florence, later in Naples). Somerville outlived her second husband by twelve years and died in Naples at the age of 91.

“Science, regarded as the pursuit of truth, which can only be attained by patient and unprejudiced investigation, wherein nothing is to be attempted, nothing so minute as to be justly disregarded, must ever afford occupation of consummate interest, and subject of elevated meditation.”
— Mary Fairfax Greig Somerville, On the Connexion of the Physical Sciences (1858), 2-3.

Mary Fairfax Greig Somerville grew up with a miserable education. After leaving school, she secretly took up algebra and Euclid, later Isaac Newton‘s Principia and Pierre-Simon Laplace‘s Mécanique céleste, and advanced to become one of the most famous autodidacts of her time.[2] With her knowledge of mathematics and astronomy, she won the recognition of authoritative scientists even before she achieved general fame. Laplace, for example, told her that she was the only woman who understood his works.

The Mechanism of the Heavens

In 1831, as a commissioned work for the Society for the Diffusion of Useful Knowledge, Mary Fairfax Greig Somerville published a translation of Laplace’s Mécanique céleste under the title The Mechanism of the Heavens in generally understandable language and form, which brought her immediate fame. Her style is characterized by clarity and brevity and is infused with great enthusiasm for the subjects treated.

In 1835 she and Caroline Herschel became the first two women admitted to the Royal Astronomical Society. In 1869 she was awarded the Patron’s Medal of the Royal Geographical Society (which did not admit women as members until 1913), and she was admitted to the American Philosophical Society. Alexander von Humboldt also corresponded with Somerville and cited her as one of the few female scientists in his magnum opus Kosmos.[3]

In Somerville’s time the value of scientific publications depended on the currency of the information, therefore frequent editions had to be produced. Her subsequent books reflect the time she could free in her domestic life as her children became more independent but also the need to earn money, as the Somervilles had a number of financial crises that peaked in 1835. As a middle-class woman she publicly and plausibly maintained that she wrote only for pleasure. Privately she paid considerable attention to the profitability of her books. Her second book On the Connexion of the Physical Sciences sold 15,000 copies and established her reputation in elite science. Her book Physical Geography was published in 1848 and was the first English textbook on the subject. It remained in use as textbook until the early 20th century. At the time of publication it was financially very successful and brought her the Victoria Gold Medal of the Royal Geographical Society. Her fourth book Molecular and Microscopic Science was published in 1869 and had taken her 10 years to write. But she started to have doubts about her choice to devote herself to popularising science, instead of concentrating on mathematics alone

The Personal Recollections of Mary Somerville, written in 1873 by her daughter Martha Somerville, offer a retrospective of the literary and scientific society of her time that is of as much interest as the portrait of the recollectionist’s personality that shines through in it. From 1833 onwards Somerville and her husband spent most of their time in Italy. Somerville maintained correspondence with a large number of leading scientists and remained engaged in current debates on facts and theories. In 1868, four years before her death aged 91, she was the first person to sign John Stuart Mill’s unsuccessful petition for female suffrage. In her autobiography Somerville wrote that “British laws are adverse to women“. She detailed the obstacles she had faced in obtaining an education as a young girl, though she did not speculate on the nature of the problem. During her lifetime the agitation for establishing women’s access to higher education had grown.

Jim Secord, Mary Somerville and the Empire of Science in the Nineteenth Century, [9]