You are here: Home › astronomy › Caroline Herschel – The Comet Sweeper 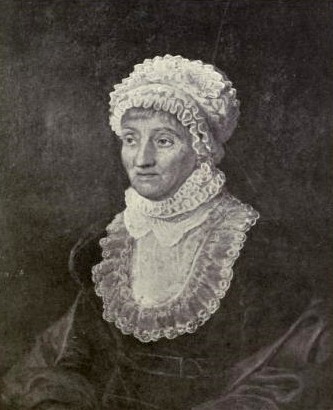 On January 9, 1848, Caroline Lucretia Herschel, German-British astronomer and sister of astronomer Sir William Herschel, passed away at age 98. She is best know for the discovery of several comets, in particular the periodic comet 35P/Herschel-Rigollet, which bears her name.

Caroline Lucretia Herschel was born in the German town of Hanover on 16 March 1750. She was the eighth child and fourth daughter of Isaac Herschel, a self-taught oboist, and his wife, Anna Ilse Moritzen. Caroline and the other children received a cursory education, learning to read and write and little more. Her father attempted to educate her at home, but his efforts were mostly successful with the boys. In addition to her later famous brother Wilhelm Herschel,[7] her brother Alexander Herschel was also active as a musician and astronomer. Every day she and her brothers attended the garrison school for a few hours so that she could learn to read and write, which was not a matter of course for a girl from the bourgeoisie at that time. However, she spent many hours of the day against her will knitting, embroidering and doing all kinds of household chores. Nevertheless, she wanted to lead a life that also made mental demands on her. Therefore, she kept to her father’s wish, which was to provide her and her four brothers with a musical education, in her case as a concert singer.

Housekeeper for her Brother William

In 1772, at the age of 22, she followed her brother Friedrich Wilhelm Herschel, who was twelve years her senior, to England, where he worked as organist and concert director in the distinguished Bath. He needed her as a housekeeper, but also wanted to give her the opportunity to escape the confines of home, to further her musical education and to participate as a soloist in his concerts. Her musical career began to finally pay off and her reputation improved across the country. [1]

The Discovery of Uranus

Since her brother always depicted a role model to the young and curious woman, he also inspired her to learn more in the field of mathematics and astronomy. As the time passed by, Caroline Herschel spent more and more time reading about scientific research and even began to construct astronomical instruments herself, which she also learned from Wilhelm. A for William as well as Caroline Herschel incisive event depicted William’s accidental discovery of the planet Uranus, which brought him international recognition. As surveying stars he noticed one special ‘star’ orbiting sun, which was later known to be the planet named after the father of Saturn, according to Roman mythology. However, William Herschel took this achievement to the decision to change his hobby to a full time occupation with the support of King George III.

For Caroline, the discovery of Uranus meant a new turn in her life. She was faced with the choice of continuing her successful career as a singer in Bath or following her brother as a scientific assistant. She opted for the latter and got a job from the court as her brother’s assistant with a salary of 50 pounds a year. Now Caroline began her own exploration of the starry sky. While she assisted her brother on his astronomical projects most of the time, Caroline was able to proceed on her own observation program when he was away. Caroline Herschel’s efforts and hard work resulted in the discovery of her first comet at a magnitude of 7.5 on August 1, 1786. Between the years 1786 and 1797, she discovered eight further comets and her reputation as a scientist and observer grew. [2]

For nights she stayed with her brother at observation posts, noted the star positions he called to her from the other end of the giant telescope they had built themselves, evaluated the nightly records and calculated them, wrote treatises for the Philosophical Transactions, discovered fourteen nebulae, calculated hundreds of them and began to make a catalogue of star clusters and nebulae, now called Deep Sky Objects. For this work she received the highest recognition, among others from Carl Friedrich Gauss [11] and Johann Franz Encke. Her beloved brother Wilhelm died in 1822. Now she held nothing more in England. A few weeks after his death Caroline Herschel moved back to her hometown Hannover, which she had left almost fifty years before as a young woman. Here she continued her astronomical studies. She ordered the extensive material her brother had left behind by sorting the records of the observations made together according to zenith distance and right ascension. In this way she also enabled her nephew John Herschel to systematically continue his father’s work and extend it to the southern starry sky.

Even though, Herschel was always reserved concerning her scientific achievements, her contributions to the field of astronomy are numerous. Caroline used a small Newton telescope to search for comets. In 1783 she discovered three remarkable nebulae and between 1786 and 1797 eight comets, five of them with unquestionable priority, including Encke’s comet. In 1797 she submitted to the Royal Society an index to John Flamsteed‘s observations, together with a catalogue of 561 stars missing from his British Catalogue, as well as a list of errors in this publication. [3,10]  She was awarded numerous honours, including the Gold Medal of the Royal Astronomical Society in 1828, of which she was appointed an honorary member in 1835. She was the first woman to receive such recognition. The reason for this was her so-called zone catalogue, which she had created in memory of her brother. It contained the reduced observations of all nebulae and star clusters discovered by Wilhelm Herschel. In 1838, the Royal Irish Academy of Sciences in Dublin appointed 88-year-old Caroline Herschel as its member. In 1846, at the age of 96, she received the gold medal of the Prussian Academy of Sciences on behalf of the King of Prussia.

On her 97th birthday, she was received by the Crown Prince and Crown Princess, had a lively chat with them for a few hours and finally sang to them a song that her brother had composed seventy years earlier. Caroline Herschel died on 9 January 1848.

At yovisto acadcemic video search, you may enjoy a video lecture by Robert Nemiroff concerning ‘Comets and Meteors‘.