You are here: Home › history › Mary, Queen of Scots 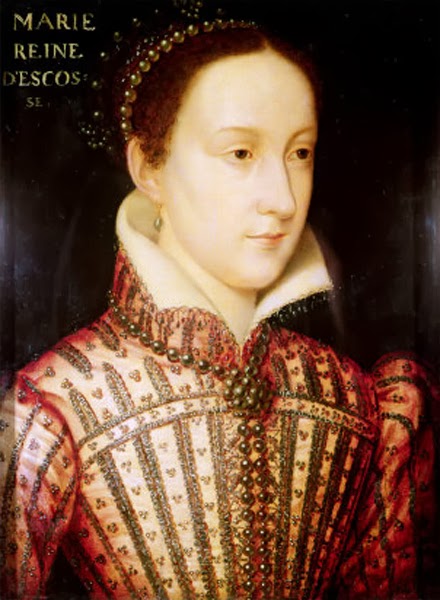 On February 18, (or February 8 according to the old Julian calendar), 1587,  Mary, Queen of Scots, was executed after having found guilty of plotting to assassinate Queen Elizabeth I. In the Western world, we all might have heard about the rivalry of Queen Elizabeth I [5] and Mary, Queen of Scots. I have learned about the story back at high school in my German lessons, when we were reading Friedrich Schillers ‘Maria Stuart‘, the psychological as well as historical interesting story of the two Queens that ends with the execution of Mary.[1]

Mary was born in December 1542 in Linlithgow Palace, the only child of King James V of Scotland and his French wife, Mary of Guise. When she was six days old her father died and she ascended to the throne, while her mother acted as regent in her stead. She spent most of her childhood in France while Scotland was ruled by regents. At just five years of age Mary was betrothed to Henry VIII‘s son, Edward. But her Catholic guardians were opposed to the match and took the young Mary to Stirling Castle, breaking the agreement. Henry ordered a series of savage, yet unsuccessful raids into Scotland known as ‘The Rough Wooing‘. After Henry VIII died in 1547, young Edward’s uncle the Duke of Somerset continued on with the attempt to forcibly create an alliance between the two countries.

Conscious of the benefits of an alliance with France, the Scots betrothed the young queen to Francis, the four-year-old heir to the French crown, and sent Mary to be raised at the court of Henry II. In April 1558, the young couple were duly married and Francis became king in 1559, briefly uniting the French and Scottish crowns. However, Henry died from an ear infection the following year. A widow at just 18, Mary returned to Scotland where she faced many challenges. As a Catholic in a country that was officially Protestant, she was regarded with suspicion by some of her subjects. Mary accepted the Protestant-led government and initially ruled with moderation.

In 1565 Mary married her cousin Henry Stuart, Lord Darnley, an English nobleman. The bridegroom was proclaimed Henry, King of Scots. Their only child was to become James I of England. Mary soon became disenchanted with Henry, he had become overbearing, arrogant and carried away by his new title. He made enemies of some of the powerful nobles and, because of that enmity, there was a plot to kill him. Some thought that Mary had knowledge of the plot. Henry, along with his servant, was found strangled to death after the gunpowder blast intended to take his life failed.

Suspicion fell on Mary and her close friend, the Earl of Bothwell. When Mary married Bothwell two months later, the Protestant lords rebelled against their queen. After her army was defeated at Langside in 1567, Mary fled to England. Mary asked Elizabeth for protection from her enemies in Scotland. However, Elizabeth was highly suspicious of the woman who in the past had claimed she was the rightful queen of England. Elizabeth feared that the arrival of Mary might encourage the Catholics in England to rebel against her rule. Elizabeth therefore decided to imprison Mary. During the next nineteen years while Mary was in prison, Elizabeth’s officials discovered several Catholic plots that attempted to make Mary queen of England.

In 1586, a man called Anthony Babington devised a plot to kill Elizabeth, rescue Mary and then see her as the next queen of England. Babington wrote in code to Mary to explain what he was doing. Mary wrote back, stating that she agreed with what he was doing. This was to be her downfall. The letters were intercepted by Elizabeth’s spymaster Sir Francis Walsingham. This was the evidence he needed to convince Elizabeth that, while she lived, Mary would always be a danger. Babington was arrested and charged with treason. Anthony Babington and six others were executed for high treason on 18 September, 1586. An attempt to kill the monarch was the most serious crime in England and the punishment was to be hung, drawn and quartered.

“Look to your consciences and remember that the theatre of the world is wider than the realm of England.”
– Mary, Queen of Scots, as quotes in [9]

Now the government had a case against Mary. She was put on trial in October 1586 in Fotheringay castle. Elizabeth was against Mary being executed for her part in the plot, and for six weeks refused to sign her death warrant. Walsingham and Parliament insisted that Mary should die. On 8 February, 1587 Mary was beheaded. Afterwards, Elizabeth claimed that she had not given permission for Mary to be executed. As a result, Davidson, the man responsible for the execution, was fined £6,000 and imprisoned in the Tower of London.

Amy Blakeway, Mary Queen of Scots: The Power and the Glory, [9]