You are here: Home › engineering › Frederic Eugene Ives and the Halftone Printing Process 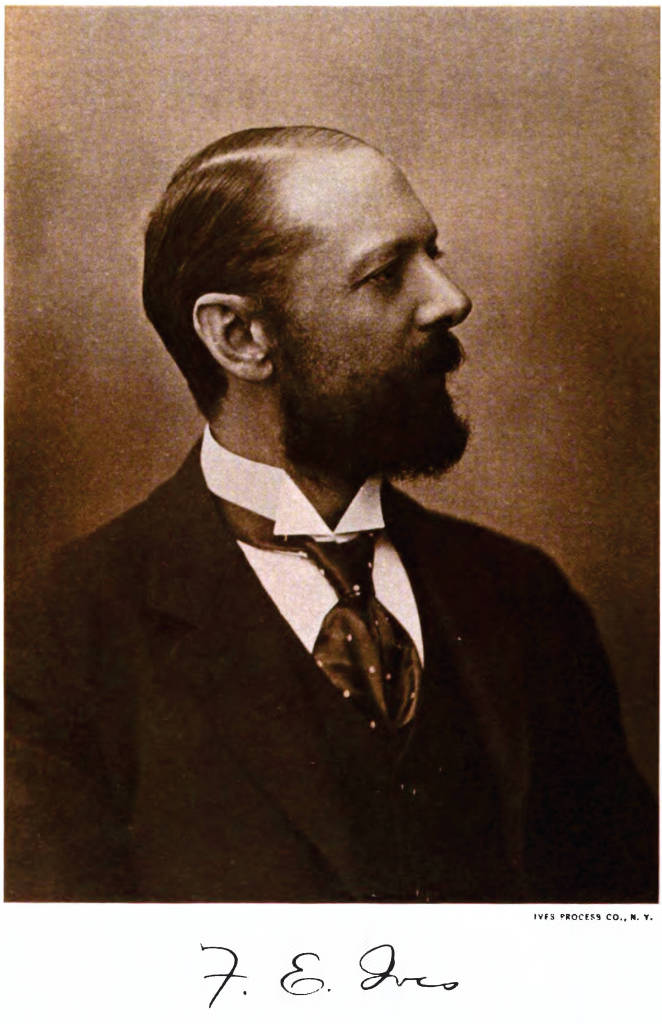 On February 17, 1856, American photographer and inventor Frederic Eugene Ives was born. He is probably best known for his invention of the halftone process, a method of reproducing photographs on a printing press. In 1881, he was the first to make a three-colour print from halftone blocks. Further inventions in photography and color printing yielded 70 patents.

Born near Litchfield, Connecticut, Ives after receiving a public school education apprenticed as a young man at the Litchfield Enquirer newspaper, where he became interested in photography and soon after opened a photographic studio in Ithaca, New York. Already at age 18, Ives became the head of the Cornell University photographic laboratory in 1875. There, Ives began to study and experiment in the field of photographic reproduction. Newspapers and other print media at the time had not yet been able to harness the potential of photography. The reason for this was in the printing process itself. Printing involved pressing an engraved plate coated with ink onto paper. The challenge now was to find a way to translate finely-shaded pictures such as photographs onto plates.

Turning his attentions exclusively to photographic experimentation in 1878, Ives studied the process of photoengraving, through which designs are projected onto plates treated with light-sensitive substances, to create engravings. At Cornell, he developed the swelled gelatin process, which refined the sensitivity of the photoengraving process using a gelatin-based coating. However, the new process still could only reproduce black lines on white. To translate the gradations of shading in photographs, Ives hit upon the idea of breaking down photographs into dots of various sizes to convey shades, or so-called “halftones,” which gave the name to the process that should revolutionize printed illustrations.[2] Prior to such processes, images were printed in books and periodicals by means of hand-engraved metal plates or wood blocks, or from drawings made on lithographic stones. Half-tone effects were obtained by engraving closely spaced parallel or hatched lines, by stippling, or by exploiting the granular texture inherent in the stone lithography process.

Ives was not the first to experiment with halftone processes in printing. But, his objective was more or less to automatically convert the intermediate tones of a photographic image into small lines or dots of stark black and white. As well, is process should perform better, or at least more efficiently, than was possible with existing processes. Furthermore, it was his goal to create a printing block that could be combined with blocks of text in an ordinary printing press. The lines or dots, of varying widths or sizes respectively, had to be small enough to adequately blend together in the eye at a normal viewing distance, producing the illusion of various shades of gray, yet the printing plates had to be durable enough to last through a typical press run without excessive degradation. Above all, the process had to be economical enough to make its widespread commercial use practical.

Ives patented his first “Ives’ process” in 1881, which required the creation of a photographic relief image, made by a variety of the carbon process, from which a plaster cast was made. The highest areas on the surface of the plaster corresponded with the darkest areas of the original photograph. The cast was pressed into contact with an inked rubber grid consisting of an array of tiny pyramidal elements, which caused a regular array of ink dots to be deposited on the plaster, their sizes varying according to the heights of the surface. The dot pattern was then photographed onto a metal plate coated with photoresist, which was developed and chemically etched, a process known as photoengraving and already in use for making printing plates from line drawings, handwriting and other purely black and white subject matter. Although complex, this process was simpler and more efficient than other processes, and put in commercial operation in 1884.

A few years later, Ives replaced this process with the much simpler one, where an ordinary photograph was rephotographed directly onto the sensitized metal plate. During the 1890s, this “Ives process” largely replaced the use of hand-engraved wood block and steel plate illustrations and remained the standard process for photographically illustrating books, magazines and newspapers during the next eight decades. 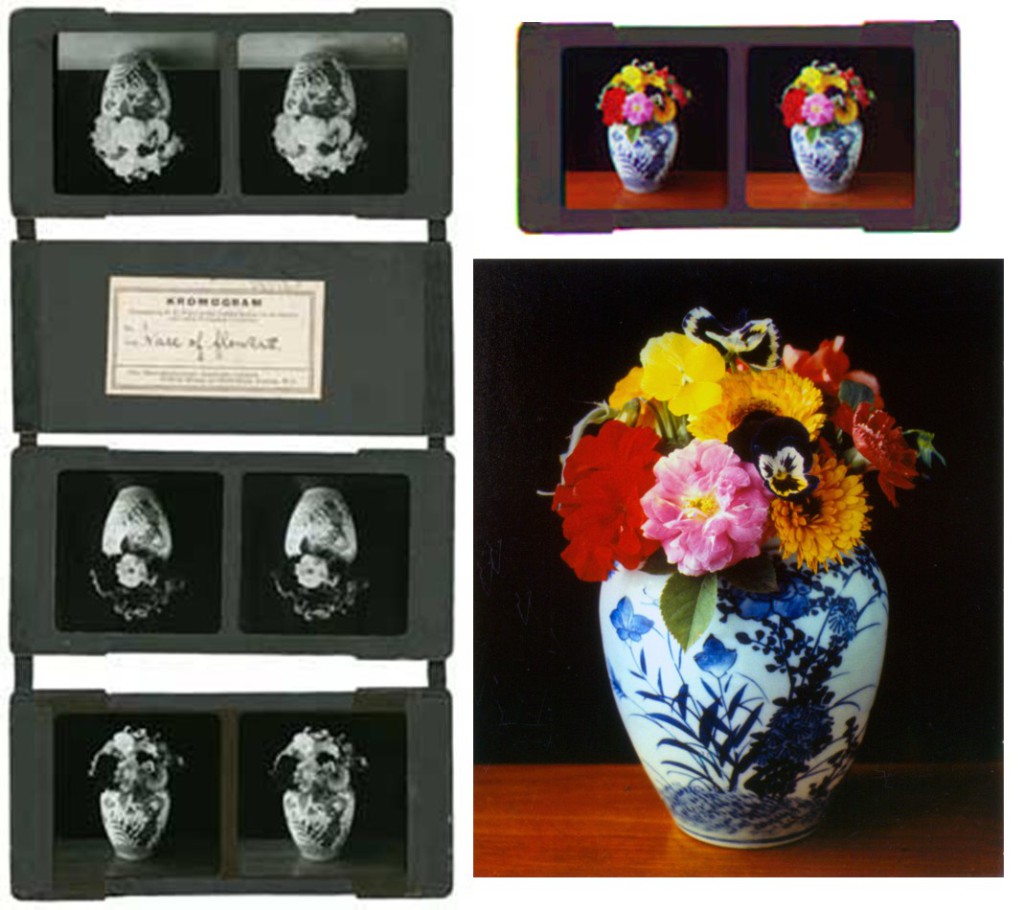 An Ives Kromogram issued in 1897

But, Ives also was a pioneer in the field of color photography. He first demonstrated a system of natural color photography in 1885. His fully developed Kromskop color photography system was commercially available already by late 1897. Three separate black-and-white photographs of the subject were taken through carefully adjusted red, green and blue filters. Then, transparent positives of the three images were viewed in Ives’ Kromskop with red, green and blue filters and transparent reflectors to visually combine them into one full-color image. The quality of the color was highly praised but the system was not a commercial success. It was discontinued shortly after the 1907 introduction of the Autochrome process, which was simple to use and required no special equipment.

In 1903 Ives patented the parallax stereogram, the first “no glasses” autostereoscopic 3-D display technology. The device was able to present the illusion of a three-dimensional image. However, to achieve this effect, the image had to be viewed from a specific vantage point or the image’s 3-D qualities would be lost. Ives received several medals and recognitions for his photographic inventions, which included the prestigious Progress Medal of London’s Royal Photographic Society for his contributions to color photography.[3] Frederic Ives died in Philadelphia on May 27, 1937.