On January 13, 1782, Friedrich Schiller’s play ‘The Robbers‘ (Die Räuber) was premiered at the national theatre in Mannheim. The work, which was initially conceived not as a stage play but as a reading drama was written during the Enlightenment and can be attributed to the Sturm und Drang movement in German literature. It was first published anonymously in 1781, then premiered in Mannheim on 13 January 1782, where it caused a national sensation and over night made Schiller famous.[3]

It is believed that Schiller began working on The Robbers more intensively in 1777, but, in secret. Around 1780, he read some passages at first so some friends to see their impact. He was at first unlucky in finding the right publisher and had to come up with the money himself. The very first volume was published anonymously with only 800 copies. Schiller found inspiration in the story Zur Geschichte des menschlichen Herzens (On the history of the human heart) by Christian Friedrich Daniel Schubart, based among other things on the fate of the well-known robber chief Nikol List. Until the first quarter of the 19th century, robber gangs were nothing unusual in Germany. However, the people were shocked by this work, because of its open criticism of the feudal system, but also the theatre gained interest in the story. Freiherr von Dalberg was back then responsible for the theater in Mannheim and asked Schiller for a theater-version, which he finished by 1781. On January 13, 1782, the scandalous play was finally premiered in Mannheim. 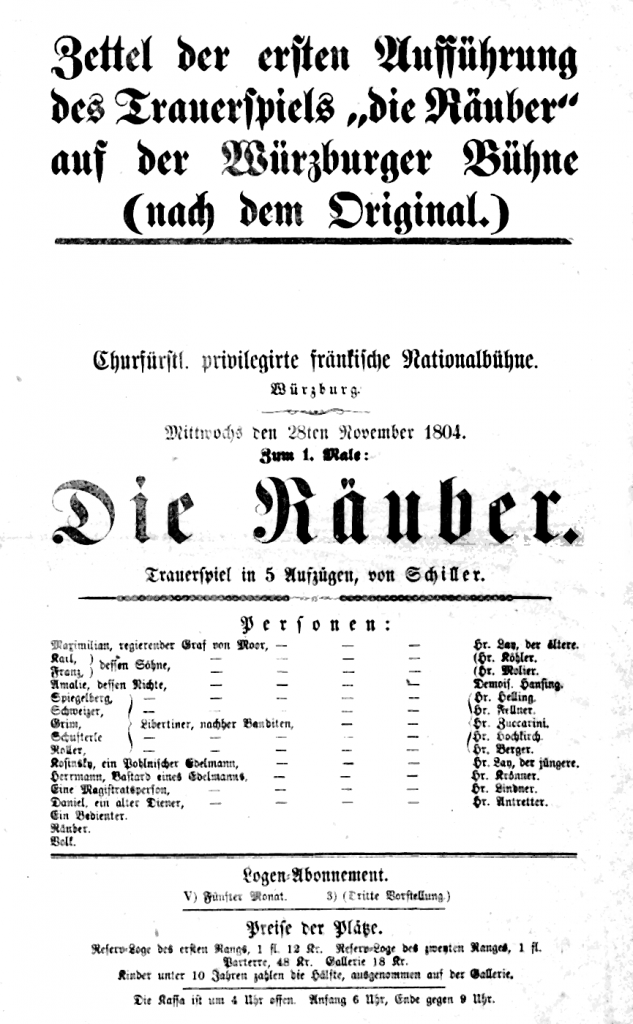 The plot of ‘The Robbers‘ revolves around the two aristocratic brothers, Karl and Franz Moor. Karl Moor is more rebellious and very charismatic while the younger brother, Franz, appears more as a cold hearted villain who plots against Karl to wrest away his inheritance. As the conflict continues throughout the plot, Franz’s motives as well as Karl’s seemingly innocent characteristics evolve to be more complex. The play is represented in a traditional five-act structure and in the altering scenes, the brother’s conflicts are depicted, showing the one questing for money and power while the other seeks to create a revolutionary anarchy in the Bohemian Forest. Many controversial topics were subject of the play including the dividing lines between personal liberty and law as well as the topic of power in general. Schiller also made the differences between good and evil and masculinity as subject of the famous play. Emotional language is the means by which Schiller dramatizes the mood of departure typical of the epoch of the storm and urge. His prose, oscillating between pathos and vulgarity, with its numerous stylistic figures creates the passionate intensity of the piece.

Notable for ‘The Robbers‘ is especially the fact that Schiller intentionally broke the rules of traditional plays as outlined already by Aristotle. For example, the drama plays at various different locations. Also, Schiller violates the rule to not mix different levels in society, which he also did in his famous work ‘Intrigue and Love‘. When Karl Moor decides to develop his close connection with his robbers and becomes a criminal, he decides to turn away from his family, leaving his privileges in society. The drama takes place in the middle of the 18th century. The time that passes during the action is about two years. This contradicts Aristotle’s rules for a classical tragedy. In addition, the plot takes place in different locations far away from each other: partly in the count’s castle, partly in the tavern on the Saxon border and partly in the Bohemian forests on the Danube.

As the drama premiered on 13 January 1782 , the public interest was great because the print edition published one year earlier had already caused a sensation because of its open criticism of the feudal system. Theatre director and director Wolfgang Heribert von Dalberg wanted to defuse the plot by moving it 300 years into the past. August Wilhelm Iffland appeared in the role of Franz Moor with contemporary clothes.[4] The performance caused a scandal. A contemporary witness reported:

“The theatre resembled a madhouse, rolling eyes, clenched fists, hoarse cries in the auditorium. Strangers sobbed and fell into each other’s arms, women staggered, close to fainting, to the door. It was a general dissolution like chaos, from whose fog a new creation breaks out. Schiller, who attended the premiere himself with his friend Andreas Streicher, although he was forbidden to do so, considered the performance in an anonymous critique in which he also accused the author, that is, himself, of weaknesses.”