You are here: Home › history › Marius and the Battle of the Raudine Plain 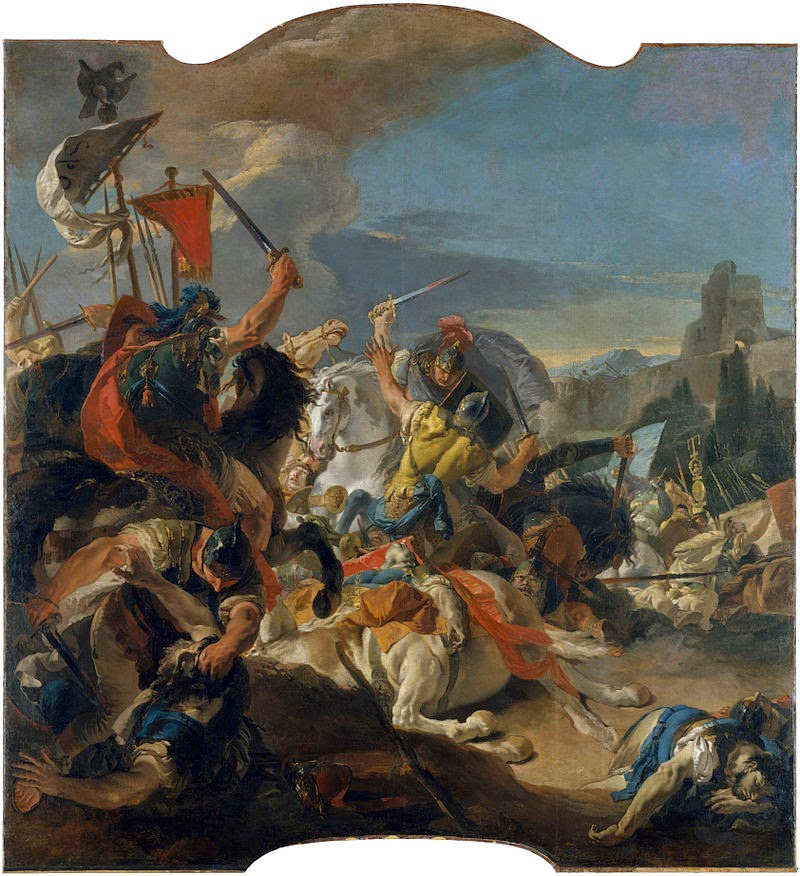 Giovanni Battista Tiepolo, The battle of Vercellae, from the Ca’ Dolfin Tiepolos, 1725-1729

“[Now a danger occurred] that threatened Italy from the west. The state now needed a great commander and looked around for a man whose helmsman it could use to escape such a great storm of war. Since no one from the noble and rich houses was willing to do so, the consuls were elected and Marius himself was appointed in his absence.”
– Plutarch, Parallel Lives, The defence against the Germanic danger from Italy

Well, then raise your hands if you have ever heart about the Battle of Vercellae. I don’t see many. Then let me tell you the story about this important event, at least important for the progress of the Roman Empire. Just try to image if the Germanic plans to invade Rome would have been successful then most likely the Roman Empire as we know it would never have come into existence. History would have taken a completely different turn. A probably I would not even be writing this blog anymore…

The Cimbri and the Romans

The Battle of Vercellae was the last and decisive battle between the migratory Germanic tribe of the Cimbri and the Romans. We do not know what caused the Cimbri to leave their settlements at the Northern Sea together with the tribes of Teutons and Ambrones and to wander throughout Europe looking for new settlement area. It was the Cimbri, who had separated from the other tribes and penetrated Northern Italy, which by that time belonged to Roman Territory. They had successfully defeated the Romans in several battles, such as the Battle at Noreia (113 BC) and the battle of Arausio (105 BC).

The Roman commander Quintus Lutatius Catulus had the task to secure the Alpine passes. But as the Cimbri flooded over the Alpes, he gave up the passes and retreated behind the river Etsch. The Cimbri attacked the last defenders beyond the Etsch. In full admiration of the Roman courage, they granted the defenders free passage. Nevertheless, they devastated the entire landscape. In the meantime, Roman consul Gaius Marius, who already had successfully defeated the Teutons the previous year in the battle of Aqua Sextiae, moved with his troops to Northern Italy to unite with the troops of Catulus. His soldiers were part of the reformed army, i.e. they had to carry all equipment and military gear by themselves – therefore they were also called ‘muli Mariani’ (mules of Marius).

Gaius Marius and the Muli Mariani

The leader of the Cimbri, Boiorix, made a peace proposal to Marius. The Cimbri would not fight against the Romans if they were allowed to keep the land. Marius rejected and instead, he brought forward the captive king of the Teutons, Teutobod. Up to this time, the Cimbri did not know about the defeat of the Teutons. Now, Boiorix called Marius to determine the battle ground, and Marius decided for the Raudine Plain, 5 km from Vercelli.

The Battle of the Raudine Plain

The 13,000 strong Cimbri cavalry rode onto the battlefield. Behind them came the 197,000 strong infantry. Marius made a final sacrifice to the gods. According to Plutarch “Marius washed his hands, and lifting them up to heaven, vowed to make a sacrifice of 100 beasts should victory be his.”The Romans got into position first, therefore the sun would be reflecting off the Roman’s armor. The Cimbri thought the sky was on fire. Sensing their sudden anxiety, the Romans attacked. The Cimbri cavalry were taken completely by surprise by the Roman cavalry. The Cimbri were forced back. The Roman legionnaires than engaged the Cimbri infantry. The Cimbri were very unnerved by this. Plutarch writes that the Romans now were able to slaughter the enemy with ease. Boiorix and his noblemen made a last stand in which they were all killed. The Romans had won a complete and stunning victory.

After the end of the fighting there were disputes between Marius and Catulus as to who had the greater share in the victory. When the soldiers were also arguing about this, the Parma deputies who were present at the time were elected as a kind of arbitrator. Catulus’ people led them around and showed that most of the dead Cimbri had been killed with spears on whose shank the name “Catulus” was carved. Nevertheless, partly the previous victory, partly the higher dignity, meant that Marius was credited with the whole work. He was then proclaimed by the people as the “Third Founder of Rome” (after Romulus and Camillus). From the spoils Marius donated two temples, one for Honos and one for Virtus. Catulus also erected a temple, but he demonstratively dedicated it to another deity: Fortuna – the goddess of happiness.

The victory of Vercellae put an end to Germanic plans to invade Rome. The Cimbri were virtually wiped out, with the Romans claiming to have killed 140,000 and captured 60,000, including large numbers of women and children. Politically, this battle had great implications for Rome as well. It marked a continuation in the rivalry between Marius and Sulla, which would eventually lead to the first of Rome’s great civil wars. But this is already another story. As well as the following story, which tells that the descendants of the Germanic prisoners are said to have joined the rebellious slave train of Spartacus, who had escaped from a gladiator school near Capua, 30 years later as gladiators together with Teutonic fellow-sufferers.