You are here: Home › chemistry › Stephanie Kwolek and the Bullet-proof Vests 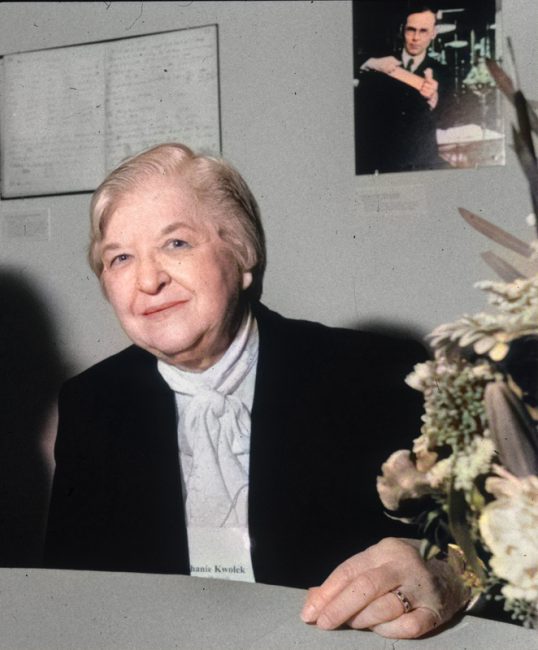 On July 31, 1923, American polymer chemist Stephanie Louise Kwolek was born. She is best known for her invention of poly-paraphenylene terephthalamide – better known as Kevlar.

Stephanie Kwolek was born to Polish immigrant parents in the Pittsburgh suburb of New Kensington, Pennsylvania. Her father, John Kwolek died when she was ten years old. She inherited her love for fabrics and sewing from her mother. Before thinking about chemistry, Kwolek thought, she might become a fashion designer, but her mother warned her she would probably starve in that business because she was such a perfectionist [1,4]. Fortunately, her interest in chemistry and medicine evolved as she grew older. When she graduated from the women’s college of Carnegie-Mellon University, she applied for a position as a chemist with the DuPont Company, among other places.

Her job interview with W. Hale Charch, who had invented the process to make cellophane waterproof and who was by then a research director, was a memorable one. After Charch indicated that he would let her know in about two weeks whether she would be offered a job, Kwolek asked him if he could possibly make a decision sooner since she had to reply shortly to another offer. Charch called in his secretary and in Kwolek’s presence dictated an offer letter. In later years, she suspected that her assertiveness influenced his decision in her favor. At DuPont, the polymer research she worked on was so interesting and challenging that she decided to drop her plans for medical school and make chemistry a lifetime career [1,2].

During her time at DuPont, Kwolek was engaged in projects searching for new polymers as well as a new condensation process that takes place at lower temperatures, about 0° C to 40° C. The lower-temperature polycondensation processes, which employ very fast-reacting intermediates, make it possible to prepare polymers that cannot be melted and only begin to decompose at temperatures above 400° C. When she was in her mid-40s, Kwolek was assigned a project to scout for fibers capable of performing in extreme conditions. This assignment involved preparing intermediates, synthesizing aromatic polyamides of high molecular weight, dissolving the polyamides in solvents, and spinning these solutions into fibers. At one point, Kwolek discovered that a large number of these rod-like polyamides‘ molecules formed liquid crystalline solutions and that these solutions can be spun directly into oriented fibers of very high strength and stiffness [1]. Testing the fibers in 1965, it was found that they were about five times as strong as steel of equal weight and resistant to fire. The potential on the market was discovered shortly after at DuPont and the institute apparently spent $500 million to develop Kevlar [3].

The fibers have found their way into all corners of the modern world. It has been used in car tires, boots for firefighters, hockey sticks, cut-resistant gloves, fiber-optic cables, fire-resistant mattresses, armored limousines and even canoes. It is used in building materials, making them bomb-resistant. Safe rooms have been built with Kevlar to protect a building’s occupants during hurricanes, and of course, bullet proof vests were introduced to police departments in 1975. A DuPont spokeswoman estimated that since the 1970s, 3,000 police officers have been saved from bullet wounds through the use of equipment reinforced with Kevlar [3].

Stephanie Kwolek received several awards for invention of the technology behind Kevlar fiber. She received the National Medal of Technology in 1996 and one year later, the Perkin Medal, presented by the American Section of the Society of Chemical Industry. Both prizes were known to be rarely awarded to women. In 1999, she also received the Lemelson-MIT Lifetime Achievement Award. She has served as a mentor for other women scientists and participated in programs that introduce young children to science [2,3].