You are here: Home › history › Rome is Burning – Nero and the Great Fire of Rome 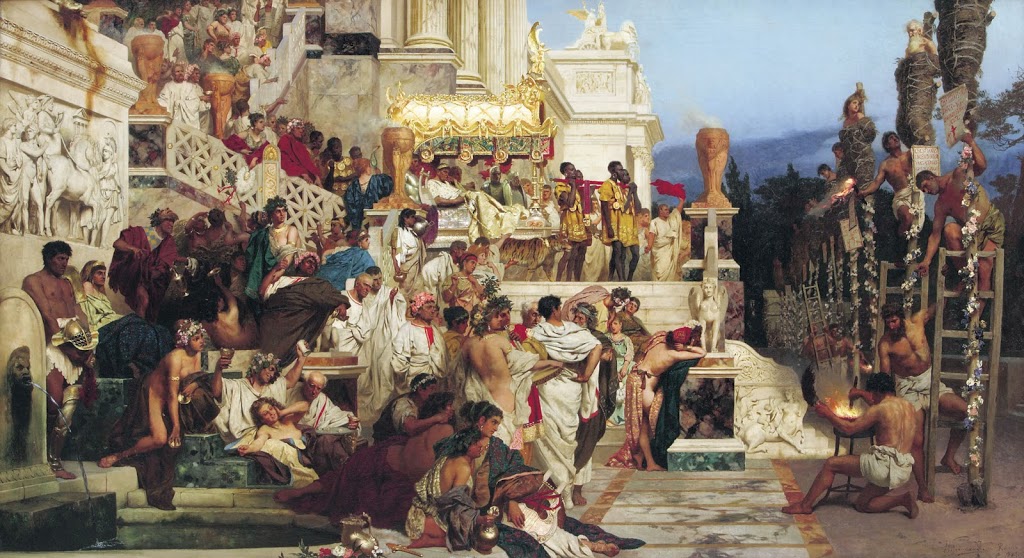 Nero’s Torches by Henryk Siemiradzki (1876). According to Tacitus, Nero targeted Christians as those responsible for the fire.

On July 19, 64 AD, the Great Fire of Rome (Latin: Magnum Incendium Romae) occurred and continued burning until July 26 during the reign of emperor Nero. According to the Roman historian Tacitus three of the 14 city districts were completely burned down, in seven districts only debris and rubble was left from the former buildings, and only 4 districts were not affected. Almost 70 percent of the entire city was destroyed. Despite the well-known stories, there is no evidence that Nero, either started the fire or played the fiddle while it burned. Still, he did use the disaster to further his political agenda and created a more spectacular Rome, a city made of marble and stone with wide streets, pedestrian arcades and ample supplies of water.

“…Now started the most terrible and destructive fire which Rome had ever experienced. It began in the Circus, where it adjoins the Palatine and Caelian hills. Breaking out in shops selling inflammable goods, and fanned by the wind, the conflagration instantly grew and swept the whole length of the Circus. There were no walled mansions or temples, or any other obstructions, which could arrest it. First, the fire swept violently over the level spaces. Then it climbed the hills – but returned to ravage the lower ground again. It outstripped every counter-measure. The ancient city’s narrow winding streets and irregular blocks encouraged its progress.” (Tacitus, Annals)

We all know the scene from the Hollywood epic movie ‘Quo Vadis‘, where famous actor Peter Ustinov as loony Emperor Nero sings and weeps with his lyra, gazing at the burning Roman capital. Of course this is Hollywood, inspired by the 1895 novel from Polish author Henryk Sienkiewicz, who by the way had received the 1905 Nobel Prize in literature. But, its only literature. During the night of July 18, 64 AD, fire broke out in the merchant area of the city of Rome. Fanned by summer winds, the flames quickly spread through the dry, wooden structures of the Imperial City. Soon the fire took on a life of its own consuming all in its path for six days and seven nights. We have two original accounts from contemporary historians, such as Tacitus and Pliny the Elder. Only Pliny the elder holds as a primary account, but unfortunately the sources got lost. Other historians who lived through the period (including Plutarch and Epictetus) make no mention of it. Other secondary sources besides Tacitus include Suetonus and Cassius Dio. At least five separate stories circulated regarding Nero and the fire:

Fire in Rome by Hubert Robert. A painting of the fire burning through Rome.

Evidence against an intended Burning

Today, most scientists tend to agree with Tacitus and believe that Nero probably did not cause the fire. But, Tacitus was only a boy at the time of the fire. Moreover, he was member of an elite aristrocracy, and we can’t be sure whether his writings may be biased. It is postulated that the fire had been intentionally started to create room for Nero’s new extravagant palace, the Domus Aurea, but the fire started 1 km away from the site where this palace would later be built, on the other side of the Palatine Hill. Moreover, the Great Fire destroyed parts of Nero’s own palace, the Domus Transitoria. It seems unlikely that Nero wanted to destroy this palace since he actually salvaged some of the marble decoration and integrated it into the new Domus Aurea. Even the paintings and wall decorations of the new palace were similar to the ones that had been burned. Last, the fire started just two days after a full moon, a time that, it is presumed, would not have been chosen if you don’t wished to be observed when laying fire intentionally.

“Nero was at Antium. He returned to the city only when the fire was approaching the mansion he had built to link the Gardens of Maecenas to the Palatine. The flames could not be prevented from overwhelming the whole of the Palatine, including his palace. Nevertheless, for the relief of the homeless, fugitive masses he threw open the Field of Mars, including Agrippa’s public buildings, and even his own Gardens. Nero also constructed emergency accommodation for the destitute multitude. Food was brought from Ostia and neighboring towns, and the price of corn was cut to less than ¼ sesterce a pound. Yet these measures, for all their popular character, earned no gratitude. For a rumor had spread that, while the city was burning, Nero had gone on his private stage and, comparing modern calamities with ancient, had sung of the destruction of Troy.” (Tacitus, Annals)

Legend has long blamed Nero for a couple of reasons. First, Nero did not like the aesthetics of the contorted ancient grown city and used the devastation of the fire in order to change much of it. Moreover, he institutionalized new building codes throughout the city. The second reason is of political nature. The Christians seemed to gain more political influence and Nero used the fire to clamp down on their influence in Rome. He arrested, tortured and executed hundreds of Christians on the pretext that they had something to do with the fire.