You are here: Home › medical science › Alphonse Laveran’s Discovery and the Fight against Malaria 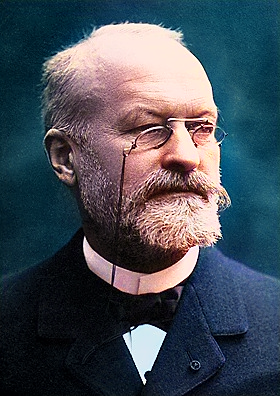 On November 6, 1880, while working in the military hospital in Constantine, Algeria, French military surgeon Charles Louis Alphonse Laveran discovered that the cause of malaria is a parasite. For this work and later discoveries of protozoan diseases Laveran was awarded the 1907 Nobel Prize in Physiology or Medicine.

Laveran was born on 18 June 1845 as the son of the military doctor and professor at the École de Val-de-Grâce, Louis Théodore Laveran, and his wife Marie-Louise Anselme Guénard de la Tour on today’s Boulevard Saint-Michel in Paris. In 1863 he was enrolled at the School of General Medicine in Strasbourg and in 1866 moved to the general hospitals in the same city. In 1867, he received his doctorate on the regeneration of nerves. In 1870, during the Franco-Prussian War, Laveran went to Metz as a medical officer. He took part in the battle of Gravelotte and the victory in Metz. Laveran started teaching and researching at the École de Val-de-Grâce in 1874, where he joined the chair for military diseases as the successor of his father.

From 1878 to 1883 Laveran was sent to Bône in Algeria, where he began his studies in malaria. In 1880, in the town of Constantine, he discovered the pathogens of malaria in the blood of his malaria patients, mainly soldiers, and presented them to the scientific public in Rome. In the following years, the famous scientist got promoted several times and started working at the Pasteur Institute in Paris in 1896.  In 1884, in the Treaty of Marsh Fever, he conjectured that this microbe was a parasite in mosquitoes, which the British Ronald Ross confirmed a few years later. He researched on several other causes of infectious diseases and received the Nobel Prize in Physiology or Medicine in 1907. A great part of the money he won was gifted to the Pasteur Institute in order to increase research on tropical diseases.

Even though, Laveran’s contributions to research on the malaria disease are enormous, the first known cases of malaria were found in the ancient Egypt. But also about 3000 years old writings in India were found, describing the illness and even 2000 years ago, Chinese wrote about a possible cure. Hippocrates of Cos noticed that humans living near swamp areas were more likely to be infected than others, but ‘invisible’ germs in general were unknown back then. The Roman Empire faced several periods of malaria epidemics and with the beginning of the Medieval Era, the disease was found all over Europe. Famous patients in later years were German Renaissance artist Albrecht Dürer, and author Friedrich Schiller. It is assumed that Europeans brought malaria to North and South America.

During the First World War from 1914 to 1918, Laveran was a member of various commissions whose purpose was to safeguard the health status of the troops. From 1920, the year he presided over the Centenary of the Academy of Medicine, his strength declined and he died in Paris on May 18, 1922. His wife died in 1950. He is buried in the Montparnasse cemetery.