You are here: Home › cinematography › How the Lumière Brothers invented Cinema 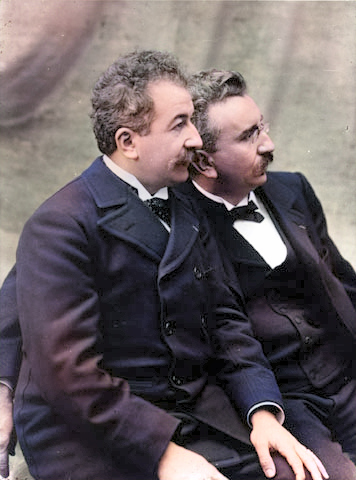 Louis and Auguste Lumiere, pioneers of the cinema

On December 28, 1895, the Lumière Brothers performed 10 movies for their first paying audience at the Grand Cafe in Boulevard des Capucines, marking the debut of the cinema.

Louis and Auguste Lumière’s father Claude Antoine Lumière (1840-1911) learnt the profession of a type painter from the painter Auguste Constantin. 1860 he went into business for himself in Besançon. Soon he was attracted by the spreading new technology of photography. In 1870 the family moved to Lyon. Lumière was successful as a portrait photographer. He tried to produce gelatine dry plates, but left the solution to his son Louis. After five months, the plate was more sensitive than those available until then. Little by little, photographers demanded the same, until 1882, when Louis and Auguste jointly photographed the production of photographic plates, the business father Lumière had in mind. In 1894, the Lumière brothers produced about 15 million photographic plates and employed 300 workers. That year also saw contact with the American kinetoscope, as Charles Moisson, chief mechanic of the Lyon-Monplaisir factory, wrote.

Louis Lumière made several technical improvements to the field of photography, paving their way to produce moving images. And when their father left the business for retirement in 1892, the brothers took action and began producing their first films, which they needed further technical improvements for and patented several of these including the cinematograph. Even though it is not clear whether the brothers really invented the machine, they held its patent from the early 1890’s. The machine was about to revolutionize mass entertainment due to its combination of a camera, a printer and a projector.

The Invention of Cinema

On 22 March 1895, the Lumière brothers presented the cinématographe to a closed audience at the Société d’encouragement pour l’industrie nationale in a version of the film “Sortie des Usines Lumière à Lyon” at the Société d’encouragement pour l’industrie nationale. On 28 December 1895, France’s first public film screening in front of a paying audience took place in the Grand Café on Boulevard des Capucines in Paris. Employees of the Lumière brothers showed ten self-made short films with the Cinématographe. Each movie was about 50 seconds long and highly fascinated the people of Lyon and beyond. One of the movies ‘The Arrival of a Train at La Ciotat Station’, was subject of an urban legend, well known in the world of cinema. The story goes that when the film was first shown, the audience was so overwhelmed by the moving image of a life-sized train coming directly at them that people screamed and ran to the back of the room.

The first performance outside of Paris took place on 1 March 1896 in the Galeries Royales Saint-Hubert in Brussels. Afterwards, there were regular screenings with eight to ten films each and a total duration of about 20 minutes. It is believed their first film was recorded that same year (1895) with Léon Bouly’s cinématographe device, which was patented the previous year. The date of the recording of their first film is in dispute. In an interview with Georges Sadoul given in 1948, Louis Lumière tells that he shot the film in August 1894.

Due to the instant success, the brothers were able to open their first cinematograph theaters, which were later better known as cinemas in metropolis around the globe like New York or London. At the Paris Exhibition of 1900, they projected their movies on a screen measuring 16 by 21 meters with their improved cinematograph. Since films were enjoyed by all classes of society, the brother’s success was unstoppable, the film industry was born and depicts an important part of our lives until today.

Actually, the Lumière brotheres had several competitors, who all claimed top have invented cinema:  Jean-Aimé LeRoy claimed that in February 1894, in front of 20 to 25 invited guests, he projected a film with a home-made apparatus. In 1895 there were numerous demonstrations of moving images, for example by Thomas Armat and Charles Francis Jenkins in Washington, D. C., Woodville Latham in New York and Robert William Paul in London. The Skladanowsky brothers, who had already been able to present their bioscope a month earlier on November 1, 1895 in the Berlin Variété Wintergarten, also took part in the presentation of the Lumière. Although the Lumière brothers were not the first inventors to develop techniques to create motion pictures, they are often credited as among the first inventors of the technology for cinema as a mass medium, and are among the first who understood how to use it.

“An Invention without any Future…”

The Lumière brothers stated that “the cinema is an invention without any future” and declined to sell their camera to other filmmakers such as Georges Méliès.[6] This made many film makers upset. Consequently, their role in the history of film was exceedingly brief. In parallel with their cinema work they experimented with colour photography. They worked on a number of colour photographic processes in the 1890s including the Lippmann process (interference heliochromy) and their own ‘bichromated glue’ process, a subtractive colour process. In 1903 they patented a colour photographic process, the Autochrome Lumière, which was launched on the market in 1907. Throughout much of the 20th century, the Lumière company was a major producer of photographic products in Europe, but the brand name, Lumière, disappeared from the marketplace following merger with Ilford.

Richard Neupert, Ebertfest 2018 – The Lumière Brothers and the Birth of Cinema, [8]