You are here: Home › cinematography › The Great Train Robbery and the Birth of the Western Movie 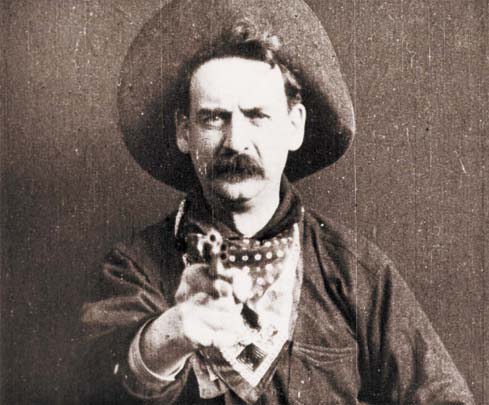 Screenshot from the Western – The Great Train Robbery (1903)

On December 1, 1903, the very first Western movie ‘The Great Train Robbery‘ premiered, directed by Edwin S. Porter, a former Edison Studios cameraman.[5] Although only 12 minutes long, it is considered a milestone in film making, expanding on Porter’s previous work ‘Life of an American Fireman’. Actually, it also was the first narrative movie, one that told a story. In this film, a number of by the time rather innovative techniques are used including cross cutting, double exposure composite editing, camera movement and on location shooting. Especially cross-cuts were a new, sophisticated editing technique. In addition, some of its frames were also hand colored in certain scenes.

A great film tradition — the Western — started with ‘The Great Train Robbery‘ in 1903. It tells the story about four bandits, who rob a train and its passengers of their valuables and then make their grand escape only to be killed in a shootout by a posse sent after them. Interestingly, the film does not spare on violence as there are both several shootouts and one man being bludgeoned with a piece of coal. Surprising to many audience members was the special effect of throwing the bludgeoned man over the side of the train. In fact, of course only a dummy was used for that purpose. Another thing shown for the very first time in ‘The Great Train Robbery‘ was a character forcing a man to dance by shooting at his feet. Scene like that have often been repeated in later Westerns ever since. To the audience’s fear and then delight, there was a scene in which the leader of the outlaws looks directly at the audience and fires his pistol at them. This scene somehow has become iconic for that movie. Interestingly, it appeared either at the beginning or at the end of the film, a decision left up to the operator. The scene is not directly related to anything in the main narrative, and is described as “Realism” by the accompanying letter from Edison Manufacturing. The media historian James Chapman observed that the sequence may have inspired the gun barrel sequence from the James Bond films. 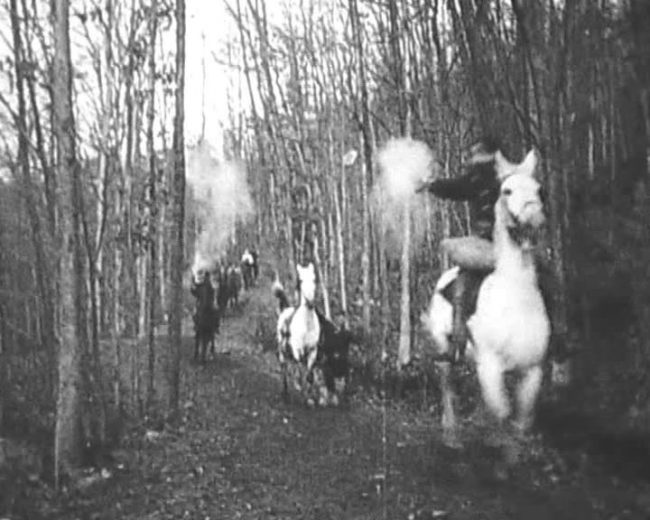 The bandits coming under fire while attempting to escape with the loot.

The Western took its inspiration from an event that became the stuff of legend: George Leroy Parker’s (aka Butch Cassidy) 1900 train heist on the Union Pacific Railroad tracks toward Table Rock, Wyoming, which ended with Cassidy blowing open a safe and escaping with $5,000 in cash. The Great Train Robbery was based on an 1896 story by Scott Marble and its title was also the same as a popular contemporary stage melodrama. The Great Train Robbery was a Western film that was hugely popular with audiences. It was played across the USA in 1904 and then in 1905 played in the first nickelodeons, film theaters in which movies cost a nickel to see. It was the most popular and commercially successful film of the pre-nickelodeon era, and established the notion that film could be a commercially-viable medium. The film’s budget was an estimated $150, equal to $4086 today Upon its release, The Great Train Robbery is also considered one of the first blockbusters and was one of the most popular films of the silent era until the release of D. W Griffith’s The Birth of a Nation in 1915.[4] From that time on, thousands of Westerns flooded cinemas throughout the silent era