You are here: Home › medical science › Louis Pasteur – the Father of Medical Microbiology 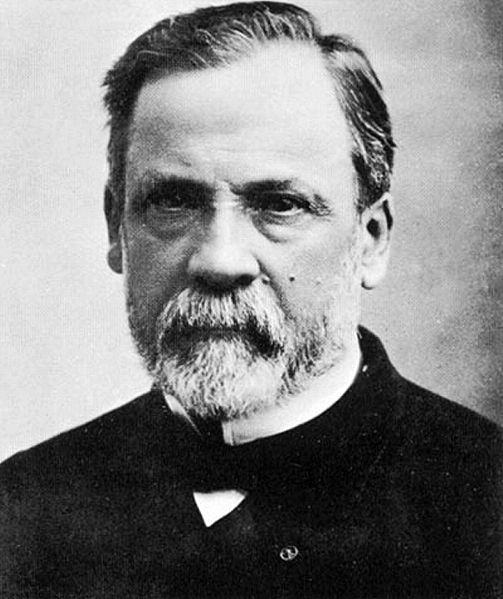 On December 27, 1822, French chemist Louis Pasteurwas born, who is considered one of the most important founders of medical microbiology. He is remembered for his remarkable breakthroughs in the causes and prevention of diseases.

“I am utterly convinced that Science and Peace will triumph over Ignorance and War, that nations will eventually unite not to destroy but to edify, and that the future will belong to those who have done the most for the sake of suffering humanity.”
– Louis Pasteur, Free Lance of Science (1960) by René Jules Dubos

Louis Pasteur was born into a poor family as the son of a tanner in Dole, Département Jura, France. The third of five children attracted attention at school, if at all, because of his artistic talent. In 1837/38, however, he won so many school prizes that he was encouraged to prepare for the École normale supérieure in Paris. The following five years Pasteur studied at the École Normale and at the same time worked as a research assistant (préparateur). In 1846 he passed the teaching examination for physical sciences in Paris. In 1847 he was awarded a doctorate in natural sciences (docteur-ès-sciences) on the basis of two doctoral theses in physics and chemistry.  At the end of 1848 as a grammar school professor of physics at the Lycée of Dijon he went to the University of Strasbourg in January 1849 as an assistant professor of chemistry (professeur suppléant). Here he fell in love with Marie Laurent, the daughter of the rector of the Strasbourg Academy. He married her already on 29 May 1849. Unfortunately, three of their children suffered from typhoid, which motivated Pasteur to find cures for these cruel diseases.

Before coming to Strasbourg, the young scientist was mainly occupied with tartaric acids, demonstrating chiral molecules for the first time and introducing himself into the scientific community through these results. Later on, Pasteur earned himself a great reputation through his germ theory of fermentation. He performed several experiments showing that fermentation results from growing micro-organisms and that growing bacteria results from biogenesis instead of spontaneous generation. Even though, Pasteur was not the first to publish these ideas, he was the one performing experiments showing the results more accurate and more correct, which convinced whole Europe very soon. Today, Pasteur counts as the father of germ theory along with the German physician Robert Koch.[7]

In 1854 he was appointed Professor of Chemistry and Dean of the newly founded Faculty of Sciences in Lille. Pasteur represented here a strongly application-oriented research in the interest of the local industry; also he stood up for an innovation, which had been introduced by an imperial decree in the same year, that students of natural sciences should be trained in the laboratory. In 1857, at the age of 34, Pasteur was appointed Director of Scientific Studies and Administrator (comparable to a Chancellor at a German university) at the École Normale in Paris. Although his two positions at the École Normale were not associated with a research assignment, Pasteur had immediately set up two attics as a laboratory, where he continued his fermentation studies begun in Lille. He gained direct access to Emperor Napoleon III, which allowed him to increasingly shift his activities to research. In 1862 Pasteur was elected to the Academy of Sciences. 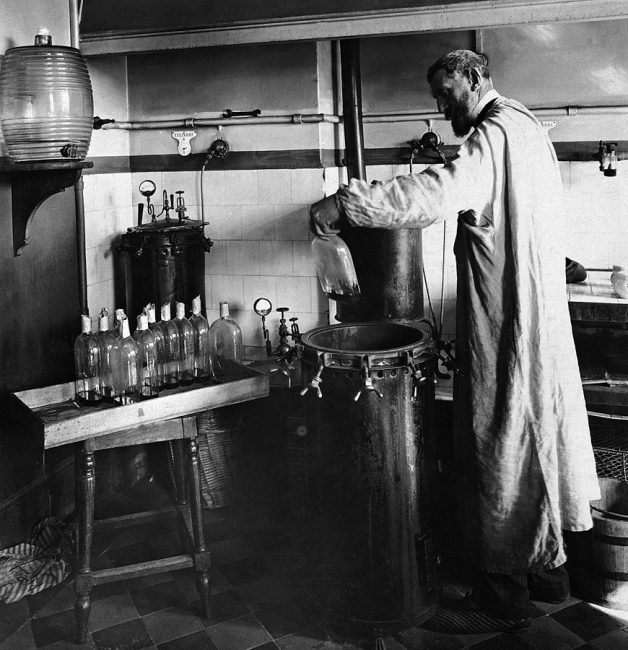 After this success, Pasteur continued his research in these fields and invented the process now widely known as pasteurization. When finding out that bacteria and mould were already present in various beverages like wine, milk or beer, Pasteur found out that these liquids had to be heated to kill those bacteria, responsible for the spoiling of beverages. After these findings, the curious scientist Pasteur found out that antiseptic methods in surgery could be used to prevent certain micro-organisms to enter the body and cause diseases. These ideas were later executed by Joseph Lister and meant a revolution in European medical studies.[6]

In 1876, at the age of 54, the chemist switched to a new field of research: infectious diseases of domestic animals and humans. As an outsider in the field of veterinary and human medicine, he began research into anthrax.  While working on chicken cholera, Pasteur managed to produce vaccines for this disease and applied his results on rabies. After being tested on a handful of animals, the vaccine was injected to a nine year old boy, who was bitten by a dog. The message that Pasteur saved this boy’s life spread rapidly and the chemist was treated like a hero. However, if the injection was really the cause for the boy’s cure is to be questioned, but still his research achievements paved the way for further approaches in these fields and led to curing millions of people up to this day. After he had succeeded in developing a vaccine to protect against anthrax, an additional laboratory was built in rue Vauquelin to produce the vaccine – the beginning of the vaccine industry. For his rabies research, Pasteur was also provided with the old stables of Saint-Cloud Castle in the park of Villeneuve l’Etang. The third-party funds raised by the French government increased until Pasteur at times received ten percent of the total French research expenditure.

In 1863, he was appointed professor of geology, physics, and chemistry at the École nationale supérieure des Beaux-Arts, a position he held until his resignation in 1867. In 1867, he became the chair of organic chemistry at the Sorbonne, but he later gave up the position because of poor health. In 1867, the École Normale’s laboratory of physiological chemistry was created at Pasteur’s request, and he was the laboratory’s director from 1867 to 1888. In Paris, he established the Pasteur Institute in 1887, in which he was its director for the rest of his life. Louis Pasteur’s contributions to medical microbiology are fundamental and were honored with the famous Leeuwenhoeck medal and several Institutes were named after Pasteur. Louis Pasteur passed away on September 28, 1895 near Paris.