You are here: Home › cinematography › Max Reinhardt – From Bourgeois Theatre to Metropolitan Culture 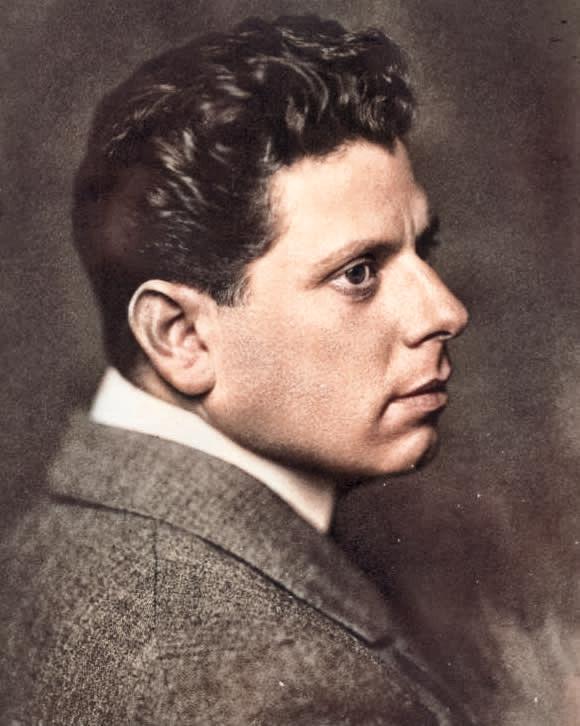 On Sep. 9, 1873, Austrian-born theatre and film director, intendant, and theatrical producer Max Reinhardt was born. Through the dramaturgically motivated use of the revolving stage, sculptural decorations, the work with fixed side towers and staircases as possibilities for performing, the circular horizon with its depth dimension, the indirect lighting, the play on podiums projecting into the auditorium, and on the arena stage, the mass direction or the chamber play concept, Reinhardt set manifold, broadly effective impulses for the renewal of theatre art. He is regarded as one of the most prominent directors of German-language theatre in the early 20th century. In 1920, he established the Salzburg Festival with the performance of Hugo von Hofmannsthal‘s Jedermann.

“I believe in the immortality of theatre. It is the most blessed hiding place for those who secretly put their childhood in their pockets and went off to play for the rest of their lives.”
– Max Reinhardt, Speech to the actors from 1928

Max Reinhardt was born as Max Goldmann in Baden, near Vienna, Austria, to Wilhelm Goldmann, a Jewish small trader from Hungary, and his wife Rosa, née Wengraf. After attending secondary school and civic school, the school leaver known as the “quiet, very shy boy” first completed a bank apprenticeship, but at the same time took acting lessons with the Burgtheater statist Rudolf Perak. Max Goldmann made his debut in April 1890 at a Viennese private stage, the “Fürstlich Sulkowsky Privat-Theater” in Matzleinsdorf. At that time he adopted the stage name Reinhardt – in 1904 the name of the whole family was changed from Goldmann to Reinhardt.

Already as a young actor Reinhardt liked to portray old men. After his first appearances Reinhardt took private lessons with the former Royal Saxon Court Actor and Conservatory Professor Emil Bürde. He got his first permanent engagement at a suburban theatre, the Volkstheater in Rudolfsheim. Outside Vienna Reinhardt appeared for the first time in September 1893 at the Stadttheater Salzburg, where he played 49 different roles during one season. In 1894 Otto Brahm, the designated director of the Deutsches Theater in Berlin, saw the actor in Rudolfsheim and offered him an engagement in Berlin.

From 1902 until the beginning of the Nazi regime in 1933 Max Reinhardt worked as a director on various stages and founded his own theatre, especially in Berlin, where he built up a real theatre empire with the Reinhardt stages. His brother Edmund (1871-1929) supported him as impresario and manager. Reinhardt opened a new dimension to German-language theatre through powerful productions and a targeted interaction of stage design, language, music and dance. In 1910 Reinhardt married the actress Else Heims (1878-1958) with whom he had two sons, Wolfgang Reinhardt and Gottfried Reinhardt. Both sons became film producers in Hollywood.

In 1911 he gave the world premiere of Hugo von Hofmannsthal‘s Jedermann at the Schumann Circus in Berlin and the world premiere of the Rosenkavalier by Richard Strauss, for which he was engaged by Ernst von Schuch at the Semper Opera in Dresden. Also in 1911, on 23 December, Reinhardt staged Karl Gustav Vollmoeller’s Das Mirakel (The Miracle) at London’s Olympia Hall. These productions attracted international attention, and his international fame, especially in Europe and the USA, can be traced back to the miracle production by Karl Gustav Vollmoeller. With the production of the Rosenkavalier, Reinhardt also became an early pioneer of modern music theatre by demanding that singers perform. 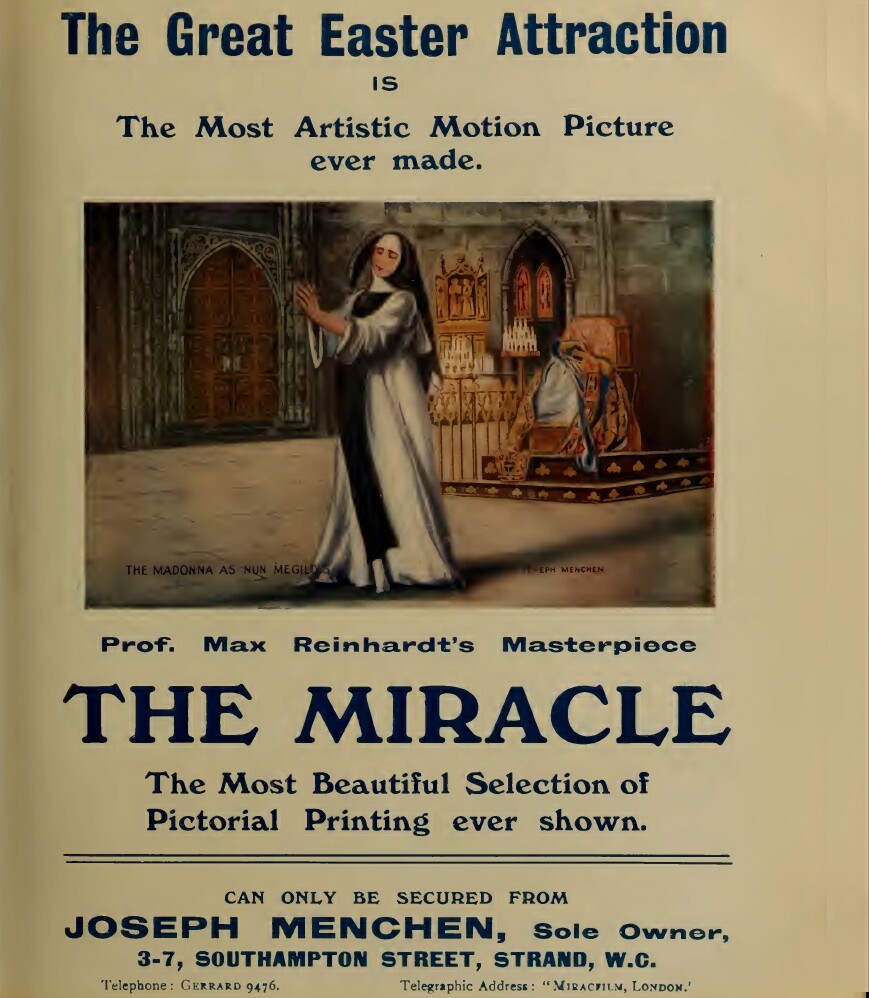 Publicity material for the 1912 film ‘The Miracle’ by Joseph Menchen

In 1924 he founded the comedy on Kurfürstendamm and engaged Bertolt Brecht and Carl Zuckmayer as dramaturges for the Deutsches Theater, which he directed until 1930. [1] Already in April 1918 he acquired Schloss Leopoldskron, an 18th century Salzburg castle with large halls, a representative staircase, 40 rooms and a large park that was in a dilapidated state. Reinhardt had the castle rebuilt and a small garden theatre was built in the castle park. Reinhardt had theatre productions shown in his castle, in which the audience moved from room to room. Schloss Leopoldskron became an important meeting place for writers, directors, composers and actors. In October 1920, he announced at the Deutsches Theater that he was leaving Berlin and that the management of his theaters would pass to his close colleague Felix Hollaender. Reinhardt moved to Salzburg. There he founded the Salzburg Festival together with the writer Hugo von Hofmannsthal and others.

When his Berlin stages fell into difficult economic waters among his successors, Reinhardt was more present in Berlin again from 1924. It wasn’t until 1932 that he finally gave up the management of his Berlin theater company. After the National Socialists seized power in Germany, who initially wanted to keep him by granting him an “honorary ariership”, he moved his work to Austria, France and the USA, where he gave guest performances and filmed Shakespeare‘s Midsummer Night’s Dream (1935). In October 1937 Max Reinhardt fled with his wife to the United States because of the persecution of the Jews.

From Hollywood to New York

Reinhardt first worked in Hollywood, where he founded a theatre and film academy. He opened the Max Reinhardt Workshop for Stage, Screen and Radio, a kind of theatre and film academy, in Hollywood, but the beginning of the lessons was delayed until June 1938, because no suitable school building could be found for a while. His wife Helene Thimig was also a lecturer and director for the Max Reinhardt Workshop, which finally moved into the Columbia Broadcasting System Building on Sunset Boulevard of Hollywood Quartier. From the press he learned that in April 1938 his Salzburg property Schloss Leopoldskron was expropriated. In 1940 he became a citizen of the United States. In 1941 he moved with his wife to New York. He signed an appeal of prominent Austrian emigrants to join a planned “Austrian Battalion” for the liberation of Nazi Germany.

On October 31, 1943, Max Reinhardt died a few weeks after his 70th birthday in his New York hotel of the consequences of several strokes, which had been released by a dog bite.