You are here: Home › literature › Jorge Luis Borges and the Library of Babel 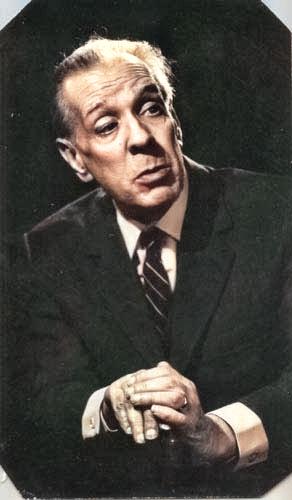 On August 24, 1899, the famous Argentine writer and blind librarian Jorge Luis Borges was born , who is considered one of the foremost literary figures of the 20th century. He is considered to be one of the most important figure in Spanish-language literature since Cervantes. Most famous in the English speaking world for his short stories and fictive essays, Borges was also a poet, critic, translator and man of letters.

Jorge Luis Borges came from a wealthy Argentine family and grew up in Buenos Aires. His father, Jorge Guillermo Borges (1873-1938), was a lawyer, lecturer in philosophy and psychology as well as an author. English and Spanish were spoken at home (his father’s mother was from Staffordshire), which is why Jorge Luis Borges also read English books (including Don Quixote) from his father’s library containing several thousand volumes as a child. His mother, Leonor Acevedo de Borges (née Acevedo Haedo, 1876-1975), was born in Uruguay and was also bilingual: she translated works by Katherine Mansfield, Herbert Read and William Saroyan from English into Spanish.

In 1914 Borges’ family moved to Switzerland where he attended school, receiving his baccalauréat from the Collège de Genève in 1918. During these years, the Borges family travelled widely in Europe, including stays in Spain. On his return to Argentina in 1921, Borges began publishing poems and essays in surrealist literary journals. With his vision beginning to fade in his early thirties and unable to support himself as a writer, Borges began a new career as a public lecturer and a librarian. By the late 1950s, he had become completely blind. Nevertheless, in 1955 he was appointed director of the National Public Library (Biblioteca Nacional) and professor of Literature at the University of Buenos Aires. In 1961 he came to international attention when he received the first ever Prix International, sharing the award with Samuel Beckett. His work was translated and published widely in the United States and in Europe.

“If the pages of this book contain some successful verse, the reader must excuse me the discourtesy of having usurped it first. Our nothingness differs little; it is a trivial and chance circumstance that you should be the reader of these exercises and I their author.”
— Jorge Luis Borges, “To the Reader” [“A quien leyere”], preface to Fervor of Buenos Aires [Fervor de Buenos Aires] (1923)

Borges had a comprehensive education in literature and philosophy. Among other things, he was familiar with the sagas of Scandinavia, the ancient English language and the Kenningar, the comprehensive works of Thomas De Quincey and Ralph Waldo Emerson,[10] the poetry and philosophy of antiquity, the German Middle Ages, the ancient Far East and Kabbalah. He had a particular preference for metaphysical literature, which he regarded as “a branch of fantastic literature”. He was familiar with the works of German philosophers such as Arthur Schopenhauer [8] or Oswald Spengler,[9] which he read in the German original. His familiarity with the literary tradition of many cultures is reflected in the diversity of his own literary work.

“Myth is at the beginning of literature, and also at its end.”
— Jorge Luis Borges, “Parable of Cervantes and Don Quixote” (January 1955)

Jorge Luis Borges has become known to a wider audience through his fantastic stories. He has also written numerous poems, essays, published book catalogues and collections of quotations, worked for magazines and as a translator. He has also published works under the pseudonyms B. Suarez Lynch and H. Bustos Domecq in collaboration with Adolfo Bioy Casares. Borges always chose a short form for his works: few of his texts are longer than ten or fifteen pages. His prose is always dense, chosen, apt, stylistically elegant and without any superfluous words. He advocated the theory that light fiction can also be of literary value. He appreciated the crime novels of Arthur C. Doyle [11] as much as William Shakespeare‘s plays.

The Library of Babel

“The universe (which others call the Library) is composed of an indefinite and perhaps infinite number of hexagonal galleries, with vast air shafts between, surrounded by very low railings.”
– Jorge Luis Borges, “The Library of Babel” (1941) First lines

Jorge Luis Borges’ intellectually most challenging subject (as well as from the viewpoint of a computer scientist or mathematician) was his concept of the ‘Library of Babel‘, where he describes a world, consisting of an endless library containing all possible books that can be written with all combinations of the 24 letters of the alphabet [2]. All the countless books stand in shelfs ordered in hexagonal rooms one after the other in a 3-dimensional layout. Unfortunately, most of the books only contain crap, i.e. letters that don’t make sense, simply because of all possible letter combinations only a few make sense and form a valid word. The librarians of this library are constantly looking for books with readable and sense-making content. And overall, because this library should contain every conceivable book, they foremost look for the one book that explains the meaning of the library and why it exists…. An incredible story you must read!

“I know of one semibarbarous zone whose librarians repudiate the “vain and superstitious habit” of trying to find sense in books, equating such a quest with attempting to find meaning in dreams or in the chaotic lines on the palms of one’s hand.”
– Jorge Luis Borges, “The Library of Babel” (1941)

A Question of Time

But he was not only concerned with infinity, but also with the phenomenon of time and how the human mind and feeling perceive, interpret and deal with it. He was also very interested in traditions from all parts of the world because he found them timeless and wanted them all to be longing for eternity. He also shared various idealistic and mythical views of different philosophers and thinkers, such as the idea that all human beings are a genius spirit who wrote and writes the great works of world literature; or that the act of procreation connects us to our ancestors because it is an action that human beings have committed throughout time, a kind of myth that separates us from the illusion of time. 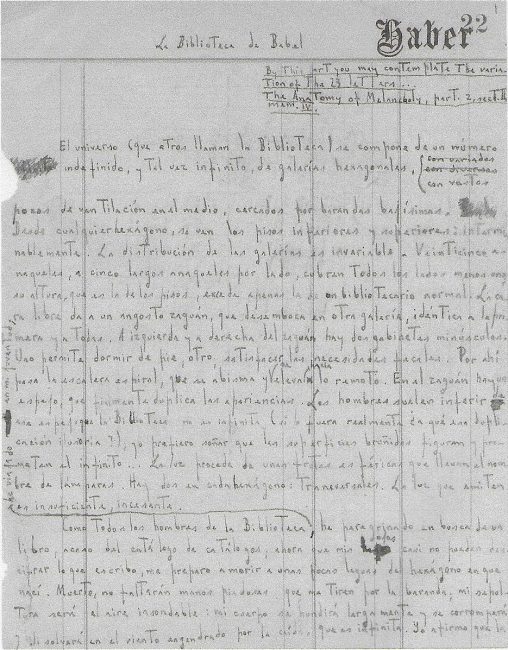 Borges was never awarded the Nobel Prize in Literature, something which continually distressed him. He was one of several distinguished authors who never received this honor. It is speculated that Borges did not receive the award because of his conservative political views. Borges commented

“Not granting me the Nobel Prize has become a Scandinavian tradition; since I was born they have not been granting it to me.“

BTW, did you know that Borges was also the referred to by Umberto Eco in his novel ‘The Name of the Rose‘, when he created the blind librarian Jorge of Burgos as the villain in his story?[3]

Alberto Manguel – Borges and the Impossibility of Writing, [6]