You are here: Home › history › Charlemagne and the Birth of the European Idea 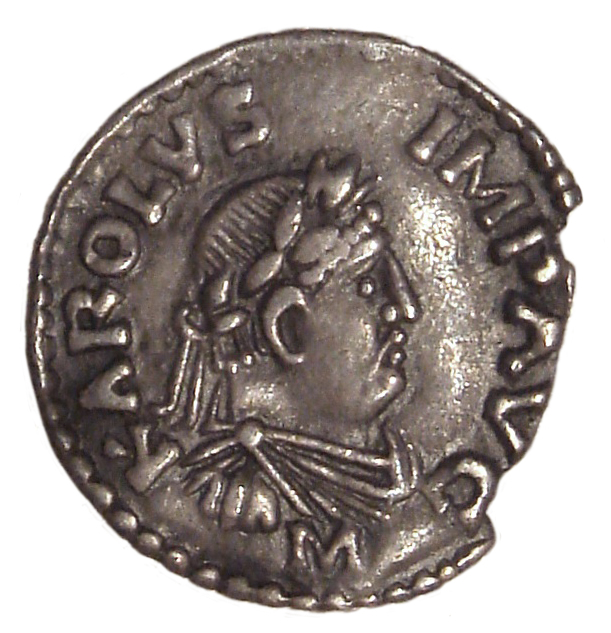 On December 25, 800 AD, Charlemagne also known as Karl the Great was crowned Emperor of the Holy Roman Empire by Pope Leo III in Rome. Thereby, he was the very first emperor of western Europe after the fall of the Roman Empire.

Back in the 6th century, the West Germanic Franks had been christianized and Francia, ruled by the Merovingian dynasty, was the most powerful of the kingdoms that succeeded the Western Roman Empire. But the Merovingians already declined into a state of powerlessness, for which they have been dubbed the “rois fainéants“, the lazy kings. Almost all government powers of any consequence were executed by their chief officers, the mayor of the palace.

Charlemagne was born around 742 as son of Bertrada of Laon and Pepin the Short, who became king of the Franks in 751, however already in the decades before the decisive power at the royal court had been in his hands as mayor of the palace. The date of his birth is 2 April, which was recorded in a calendar from the 9th century of the monastery Lorsch. Although his parents married before his younger brother Carloman was born, they were not legally married at the time of Charlemagne’s birth, and he was thus thought to be illegitimate. Charlemagne’s exact birthplace is unknown, although historians have suggested Liege in present-day Belgium and Aachen in modern-day Germany as possible locations. The biography written by Charlemagne’s confidante Einhard – today often referred to as Vita Karoli Magni – represents the main source of Charlemagne’s life alongside the so-called Annales regni Francorum (Imperial Annals), but it ignores his childhood, about which almost nothing is known. This also holds for his education, whereby as an adult, he displayed talents for foreign languages. He even could speak Latin and understand Greek among other languages. Even in the Merovingian period, a certain level of education was by no means unusual for aristocrats of high standing. Although the level of education had fallen in the 8th century, Latin was omnipresent at court, in administration and in church services. However, Charlemagne was in any case a ruler who was quite educated for his time and interested in education all his life.

Becoming King of the Franks

In 754, he participated in the ceremony where Pope Stephen II appointed Charlemagne’s father Pepin king of the Franks. He also joined Pepin on many military campaigns. In the division of the realm after Pepin’s death in 768, his brother Carloman received a larger and richer portion. Charlemagne and Carloman did not exercise joint dominion over the Frankish Empire, but ruled in their respective empires independently of each other, as can be seen from their documents. Under these circumstances relations between the brothers turned out to be difficult, but Carloman died unexpectedly in 771, leaving Charlemagne the sole ruler of the entire kingdom. The brothers had a strained relationship; however, with Carloman’s death in 771, Charlemagne became the sole ruler of the Franks.

The Formation of an Empire

Charlemagne aimed to unite all the Germanic peoples into one kingdom, and convert all his subjects to Christianity. In order to carry out this mission, he spent the majority of his reign engaged in some military campaigns. In 772, it was resolved at the Diet at Worms to make war against the Saxons, for the security of the frontiers, which they continually threatened, and for the extension of the Christian religion. The still pagan Saxons did not know any central institutions of power and did not live in a closed imperial union like the Franks and Lombards, but only in loosely organized tribal unions (Westphalia, Eastphalia, Engern and Northern Albingians). The Saxons had already repeatedly come into conflict with the Franks before, as their tribal area bordered directly on the northeastern Franconian territory. Einhard describes Charlemagne’s campaigns against the Saxons as the longest, cruellest and most strenuous ever for the Franks.

War Against the Saxons

Charlemagne advanced as far as the Weser in 772, securing his conquests by castles and garrisons. Subsequently, Pope Adrian I called him to his aid against Desiderius, King of the Lombards. Charlemagne crossed the Alps from Geneva with two armies by the Great St. Bernard and Mount Cenis in 773 and overthrew the Kingdom of the Lombards in 774, who acknowledged him as their King. Next, he hastened to interfere in the wars of the Arabs and Moors in Spain in 778, and added to his dominions the region between the Pyrenees and the Ebro. Subsequent insurrections and wars in Germany resulted in victories over the Bulgarians and Huns, and in the further consolidation and extension of his Empire at its eastern boundaries.

In 778 the Saxon Widukind appeared for the first time as a new leader of the rebels who continued to oppose Frankish rule; the participants were primarily not nobles, but free and semi-free, while parts of the Saxon nobility arranged themselves with the conquerors. The time for a renewed uprising seemed favourable, for Charlemagne had suffered a bitter defeat in Spain in the same year. Charles now also regarded the Saxon resistance as a renunciation of the Christian faith; the Saxons involved were high traitors for him. In 780 and 782 Charlemagne again held imperial assemblies in Saxony. The Saxon resistance seemed to be broken. Saxon aristocrats were integrated into the Frankish rule and rewarded and even a Frankish- Saxon troop contingent was to be deployed against the Slavs. In 782 large parts of the Saxons rose again under Widukind’s leadership. At the Süntel in the Weserbergland they defeated a Frankish troop deployment destroying, which is concealed in the original version of the imperial annals. Charlemagne marched hastily to the Weser to smother the uprising. Some of the rebels submitted again, but at Verden an der Aller the so-called blood court of Verden still took place in 782: According to the Imperial Annals, 4500 Saxons were killed on Charlemagne’s orders. At the end of 784 Charlemagne moved back to Saxony in winter to secure his rule. In the following year further campaigns were carried out, the Saxon resistance had now been brutally broken and Charlemagne offered Widukind talks. Widukind agreed and submitted to the king of the Franks; he was even baptized at Christmas 785 in the palace of Attigny, where Charles acted as his godfather.

Charlemagne, Ruler of the Carolignian Empire

In his role as a zealous defender of Christianity, Charlemagne gave money and land to the Christian church and protected the popes. As a way to acknowledge Charlemagne’s power and reinforce his relationship with the church, Pope Leo III crowned Charlemagne emperor of the Romans on December 25, 800, at St. Peter’s Basilica in Rome. Amid the acclamations of the people, who saluted him as Carolus Augustus, Emperor of the Romans, Charlemagne tied up his rule to the Roman Empire, which greatly confirmed and increased the respect entertained for him.

As emperor, Charlemagne proved to be a talented diplomat and able administrator of the vast empire he controlled. Charlemagne himself was apparently interested in culture and gathered several scholars from Latin-speaking Western and Central Europe at his court. The most respected of them was the Anglo-Saxon Alcuin, who had previously been director of the famous cathedral school in York.[8] He owned an extensive library and enjoyed an outstanding reputation. In addition there was a number of other educated people like Einhard. At first he was a pupil of Alcuin, later director of the court school, Charlemagne’s confidant and his master builder. The court and the court school gave impulses for a cultural renewal, whereby also the Carolingian church was reformed as central culture carrier.

Charlemagne strongly promoted education and encouraged the Carolingian Renaissance, a period of renewed emphasis on scholarship and culture. He instituted economic and religious reforms, and was a driving force behind the Carolingian miniscule, a standardized form of writing that later became a basis for modern European printed alphabets. During his reign, Charlemagne always was on the move and ruled from a number of cities and palaces, but spent significant time in Aachen. His palace there included a school, for which he recruited the best teachers in the land, a predecessor of later universities.

In addition to learning, Charlemagne also was interested in athletic pursuits. Known to be highly energetic, he enjoyed hunting, horseback riding as well as swimming. Aachen held particular appeal for him due to its therapeutic warm springs. His fame spread to all parts of the world. Even the caliph of Baghdad Harun al-Raschid sent ambassadors to salute him. Charlemagne enjoyed good health till shortly before his death, January 28th, 814. He was buried at Aix-la-Chapelle, in a church which he had built there. Interestingly to mention is that actor Sir Christopher Lee, who is an offspring of the Cardini noble family which can be laid back up to the Carolingians, is said to be Charlemagne’s most famous descendent.

Louis the Pious, king of Aquitaine, Charlemagne’s only surviving legitimate son succeeded him as he had intended. His empire lasted only another generation in its entirety; its division, according to custom, between Louis’s own sons after their father’s death laid the foundation for the modern states of Germany and France