You are here: Home › explorer › Louis Antoine de Bougainville and his Voyage Around the World 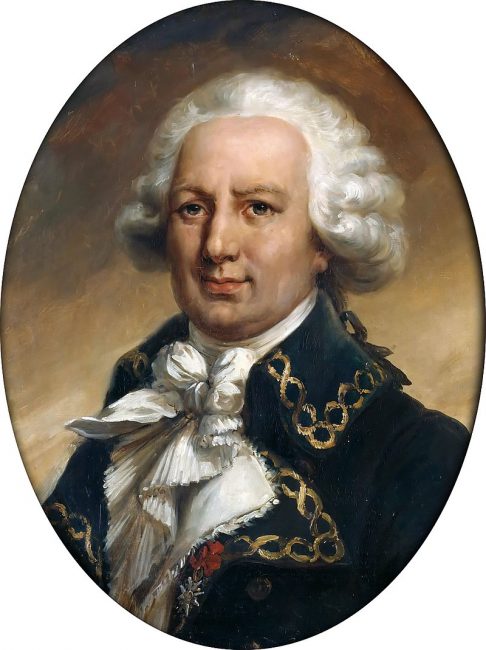 Probably on November 11, 1729, French admiral and explorer Louis Antoine de Bougainville was born. A contemporary of James Cook,[5] he gained fame for his expeditions, the first recorded settlement on the Falkland Islands and his voyages into the Pacific Ocean. The largest of the Solomon Islands is named after him, as is the colorful tropical climbing plant bougainvillaea.

Louis Antoine de Bougainville was born in Paris on Rue Barre-du-Bec. His parents were the notary Yves Pierre de Bougainville (1686-1754) and Marie Françoise, née Darboulin (ca. * 1700). He began to study law, which he abandoned shortly after. In 1752, Bougainville wrote a mathematical work on integral calculus. After becoming Secretary of the French Embassy in London, he was accepted into the scientific society, the Royal Society in London, in 1756. During the Seven Years’ War, Bougainville gained experience at sea. In the same year he went for several years as adjutant to General Louis-Joseph de Montcalm to French Canada (New France), where he fought against Great Britain during the French and Indian War.

The Defense of Quebec

In the battle on the Abraham Plain near Quebec on September 13, 1759, in which the French suffered a decisive defeat and his superior Montcalm was mortally wounded, Bougainville was unable to intervene in time with the soldiers he led, as Montcalm had not waited for his arrival. Bougainville’s absence may have been decisive for the battle and the war. As a colonel in the infantry, he returned to France from English captivity and joined the French Navy in 1763 with the equivalent rank of captain. He later became a diplomat taking part in negotiating the Treaty of Paris that eventually conceded most of New France to the British Empire.

After the war, the French decided to colonize the Falkland Islands, which were not well known at this time. Bougainville decided to travel there on his own expense. He set out in 1763 with the Eagle and the Sphinx and they reached the French Bay in 1764. Two years later the islands had to be ceded to Spain, the new lords kept the name in Spanish spelling and called the archipelago Malvinas.

Circumnavigation of the World

In 1766, Bougainville was commissioned by the French government under Louis XV to be the first Frenchman to sail around the world. At that time, European sailors were still searching for the Terra Australis Incognita. On Monday 15 December 1766, Bougainville set sail from Brest on the frigate La Boudeuse. The Fleute L’Étoile left the port of Rochefort on Sunday, February 1, 1767, to support the circumnavigation of the world, and met the Boudeuse in Rio de Janeiro on Saturday, June 13, 1767. Also on board was Jeanne Baret, who joined the expedition disguised as a man, calling herself Jean Baret. She enlisted as valet and assistant to Commerçon, but that is a whole different story. [4] 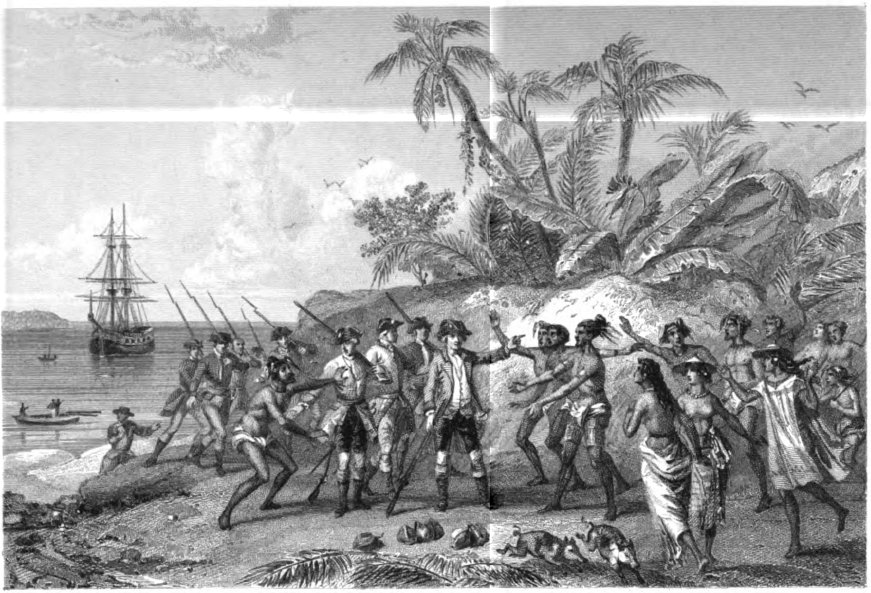 Tahiti and the Pacific Ocean

In 1768 the ships reached the Pacific. Of particular note is the stay on Tahiti from April 6 to 15, 1768, which Bougainville formally took possession of as Île de la Nouvelle Cythère (New Kythira) for the French king.  He also explored numerous other Pacific islands, including the New Hebrides, the Louisiades and the Solomon Islands, which he rediscovered after nearly 200 years of oblivion, and whose northernmost island received his name, Bougainville. Bougainville almost discovered the Great Barrier Reef and sailed towards Solomon Islands. However, the expedition was attacked probably by people from New Ireland and they headed towards the Moluccas. The expedition managed to complete the mission with the loss of seven men.

In 1771, Bougainville’s detailed travelogue was published, Voyage autour du monde par la frégate du roi La Boudeuse et la flûte L’Étoile. As a well-known personality in the spirit of the Enlightenment, he helped the theses of Jean-Jacques Rousseau to further popularity with his idealized image of the South Sea islanders as noble savages.[6] The highlight of the report is his stay in Tahiti, whose interior he describes as a jardin d’Eden (Garden of Eden), which offered its inhabitants everything they needed to live. He describes the islanders as friendly, naive and happy people who have not yet been spoiled by civilization.

In 1772, Bougainville was raised to the position of personal secretary to Louis XV. He fought from 1779 to 1782 as a rear admiral and commander of several liners against the British in the battles of the American Revolution. Among other things, he commanded the first squadron of the French fleet in the victorious naval battle off Chesapeake Bay (September 5, 1781) against the British fleet. However, he was held primarily responsible for the defeat in the naval battle of Les Saintes (April 12, 1782), but a court martial was limited to a public reprimand. After the French Revolution, he was offered the newly created Ministry of the Navy in 1791 and a vice admiral’s post in 1792, but Bougainville declined. He settled on a property in Normandy. He survived the bloody terror, La Terreur (imprisoned in 1794), despite his well-known royalist attitude, unscathed only by the fall of Robespierre. In 1794, he became a member of the French Academy of Sciences, the Egyptian expedition of 1798 he helped prepare. In 1799 he became head of the Parisian Bureau of Longitude. Louis Antoine de Bougainville died in 1811 in Paris at the age of 81.