You are here: Home › explorer › Jeanne Baret – An Intrepid Woman of Discovery 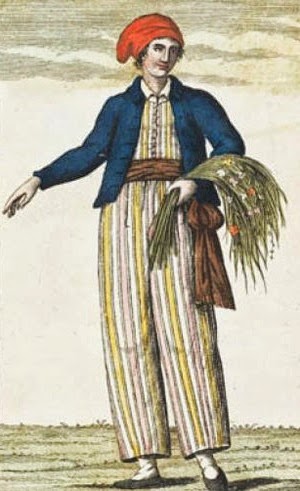 On July 27, 1740, French natural scientist Jeanne Baret was born. She was probably the first woman to circumnavigate the globe, but with certainty she was the first woman who achieved this disguised as a man.

Jeanne Baret grew up in a very poor region of France with rather uneducated people. It is assumed that her father has been illiterate in contrast to Jeanne. However, it is not clear, where exactly she received her education from. She became employed as a housekeeper to the French naturalist Philibert Commerson as well as his wife who passed away shortly after. It is assumed, that Jeanne Baret from then on took care of Commerson’s household and historians also suggest that they had some kind of relationship. She got pregnant later on but insisted in not telling who the father was. However, she left her child at a Foundlings Hospital.

The Expedition of Bougainville

In 1765, Commerson was invited to join the expedition of Louis Antoine de Bougainville.[5] He was an admiral and explorer and received the permission by Louis XV to circumnavigate the globe as the first French of all time. This was one of the most impressive expeditions only considering the size of the crew. Bougainville took around 350 people with him, and for the first time ever, many scientists for instance naturalists and geographers joined the trip.

Commerson however hesitated in taking part for a while since his health was very poor at this time. He preferred taking Baret with him to take care of him and his goods but no women were allowed on any ship occupied by the French Navy. She got the idea to disguise herself as a man pretending to be a stranger to Commerson. It is not completely clear, if Commerson was aware of Jeanne Baret’s plan, but it is highly assumed.

Commerson and his “assistant” Jean Baret (as she called herself now) shared the large cabin of the captain on the storeship Étoile with a private restroom, a situation that allowed her to stay undiscovered for a while. When the crew reached Montevideo, they explored the surrounding nature and Baret is known to have done most of the work since Commerson had serious health issued during the whole trip. Near Rio de Janeiro, they collected further plants, one of them naming Bougainvillea, which turned out to be their most famous discovery. As the journey continued, Commerson’s health became increasingly poor and Baret became known as very couraged, strong and loyal, taking care of him and continuing his work very professionally.

In April 1768, the expedition reached Tahiti. As soon as Baret left the ship, natives came crying out that she was a woman, wherefore she had to reenter the ship. A few weeks later, Bougainville interviewed her on the accusations, finding out her real sex. But, when the crew exactly found out about her secret is unknown. Rumors may have circulated during the whole journey, but historians are not completely aware of the exact date. Baret and Commerson continued the trip, but in 1773, while the expedition stopped at Mauritius, Commerson died. Jeane Baret continued circumnavigating the globe outside of the original expedition. It was assumed that she and Commerson left the ship at Mauritius, since she was not safe there anymore.

Jeane Baret’s contributions to botany are extraordinary. Scientists at the University of Utah and the University of Cincinnati did a good job promoting Baret’s achievements to the world of science and the plant Solanum baretiae was named after her, describing the plant’s namesake as “an unwitting explorer who risked life and limb for love of botany and, in doing so, became the first woman to circumnavigate the world.”