You are here: Home › medical science › Sir James Young Simpson and the Use of Chloroform 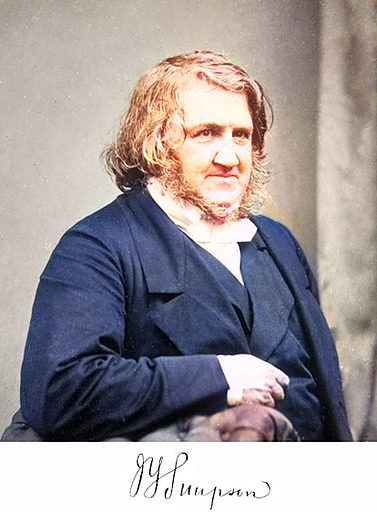 On November 12, 1847, Scottish obstetrician and important figure in the history of medicine Sir James Young Simpson published his self trial experiments with the new anesthetic chloroform.

“All pain is per se and especially in excess, destructive and ultimately fatal in its nature and effects.”
– James Young Simpson

Simpson was born in Bathgate near Edinburg, West Lothian, Scotland, as the seventh son and eighth child of an impecunious baker. Simpson attended the University of Edinburgh from the age of only 14, graduating at the age of 18 but, as he was so young, had to wait two years before he got his license to practice medicine. In 1838 he designed the Air Tractor, the earliest known vacuum extractor to assist childbirth but the method did not become popular until the invention of the ventouse over a century later. At the age of 28 he was appointed to the Chair of Medicine and Midwifery at the University of Edinburgh, here he became a pioneer in obstetrics and gynecology.

He improved the design of obstetric forceps that to this day are known in obstetric circles as “Simpson’s Forceps” and, like German physician Ignaz Semmelweis, fought against the contagion of puerperal sepsis.[4] His most noted contribution should be the introduction of anaesthesia to childbirth. Simpson, unlike most medical men of his day, was quite concerned about the pain his patients suffered during childbirth, and searched for ways to alleviate it. While visiting London, he met with the surgeon Robert Lister, who praised the use of ether as an anesthetic in a recent operation.[6] Already in 1799, Sir Humphry Davy used nitrous oxide (laughing gas) as the first anaesthetic. [5] Ether, however, was not conducive for obstetrics, so Simpson continued to experiment with different chemical compounds.[3]

In 1847, the same year he was appointed physician to Queen Victoria while she was visiting in Scotland, Simpson discovered the anesthetic properties of chloroform. Together with two of his friends, Drs Keith and Duncan, Simpson used to sit every evening in his dining room to try new chemicals to see if they had any anaesthetic effect. On 4 November 1847 they decided to try a ponderous material named chloroform that they had previously ignored. On inhaling the chemical they found that a general mood of cheer and humour had set in. But suddenly all of them collapsed only to regain consciousness the next morning. Simpson knew, as soon as he woke up, that he had found something that could be used as an anaesthetic. It was very much by chance that Simpson survived the chloroform dosage he administered to himself. If he had inhaled too much and died, chloroform would have been seen as a dangerous substance, which in fact it is. 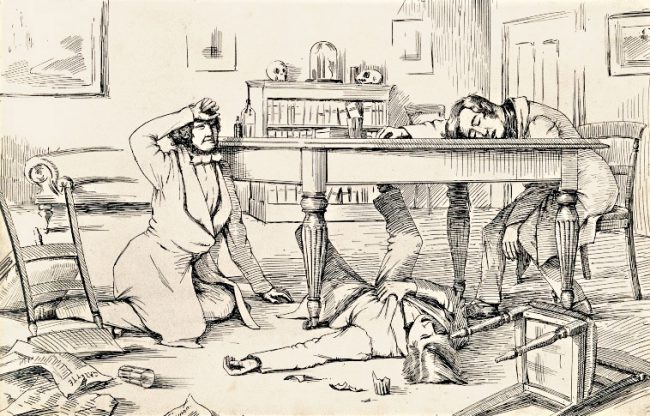 The effect of chloroform on James Young Simpson and friends

Simpson was the first to utilize chloroform as an anesthetic to ease the pain of childbirth. This practice was initially opposed by the Church because it tampered with the Divine Order. According to Genesis the pain of childbirth was the Lord’s punishment on womankind for Eve eating the apple from the tree of knowledge. The controversy surrounding this practice quickly disappeared after Queen Victoria used chloroform to help her deliver Prince Leopold in 1853.[3] But, Simpson’s medical contributions extended beyond obstetric anaesthesia. Simpson pioneered the uterine sound, long forceps,  wire sutures, and improved statistical analysis of operative outcomes.

Simpson has written many scientific papers on acupressure. This procedure has nothing to do with traditional Chinese medicine, but describes a method of preventing bleeding vessels by means of metal needles that are inserted under the vessel and then bent over like clamps. Simpson believed that he had found the cause of wound infections in the thread material, and his vascular needles were quickly abandoned due to many secondary bleedings. However, he was successful in the fields of obstetrics and gynecology, anesthetics and hospitalism. Simpson was honoured with a first baronet in 1866. He died four years later in 1870 at the age of 59 in his home after an attack of angina pectoris. The day of his funeral was declared a day of public mourning in Edinburgh and two thousand people followed his hearse through streets lined by over 30,000 mourners.[2]