“For if society lacks the unity that derives from the fact that the relationships between its parts are exactly regulated, that unity resulting from the harmonious articulation of its various functions assured by effective discipline and if, in addition, society lacks the unity based upon the commitment of men’s wills to a common objective, then it is no more than a pile of sand that the least jolt or the slightest puff will suffice to scatter.”
– Émile Durkheim, quoted in [9]

Émile Durkheim was born and grew up in Épinal, Lorraine as the son of a sternly religious Jewish family. But even though Durkheim decided not to follow his parent’s footsteps in the religious sense, he remained in the Jewish community and later even collaborated with several prominent members of the association.

After some attempts to study in Paris at the ‘Ècole normale supérieure’, he was finally accepted and learned together with his later famous classmates Jean Jaurés or Henri Bergson. After graduating, he started teaching philosophy and later moved to Germany where he was able to study sociology and publish several works on social science and philosophy. In 1887, Durkheim received a teaching appointment for sociology and philosophy in Bordeaux, which was the university’s first course in social sciences.

It was also in Bordeaux, where he married Louise Dreyfus with whom he later had two children and where he mastered three of his major works:

In 1896 he founded the first French social science journal ‘L’Année Sociologique’ and published 12 volumes with like-minded people and students of himself. Durkheim reached his goal of becoming professor of the chair for the ‘Science of Education’ at the University of Sorbonne in Paris in 1902. Later on he also did advisory work for the Ministry of Education. 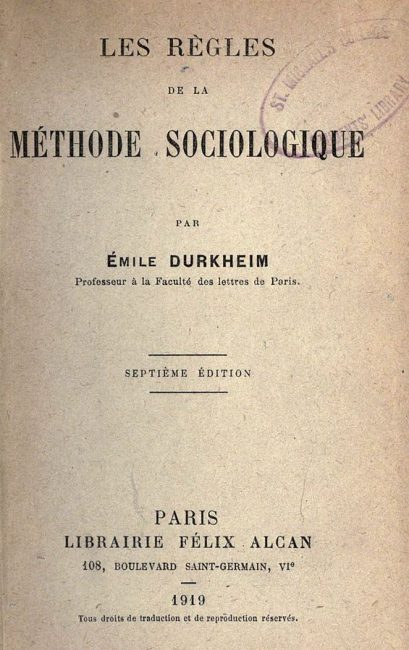 To the well-known students of Durkheim belong Marcel Mauss, Durkheim’s nephew, and Maurice Halbwachs. The school around Durkheim and the Année Sociologique are sometimes blamed for the fact that researchers who did not follow Durkheim, such as Gabriel Tarde and Arnold van Gennep, were undeservedly forgotten. After his death, Durkheim continued to influence many thinkers in France, including the founders of the Collège de Sociologie, Claude Lévi-Strauss, Michel Foucault and others from the French structuralist world. Pierre Bourdieu also repeatedly falls back on Durkheim. In Great Britain, Durkheim was particularly intensively studied by the ethnological movement there. Malinowski and Alfred Radcliffe-Brown dealt in particular with Durkheim‘s work in the functionalist variations of British social anthropology at Bronisław. Durkheim’s legacy in modern sociology was made fruitful above all by Talcott Parsons, who brought the critique of utilitarianism to the fore.
In recent times, Durkheim has been used again for a theory that can explain the change in values in society and the development of the moral autonomy of the individual.