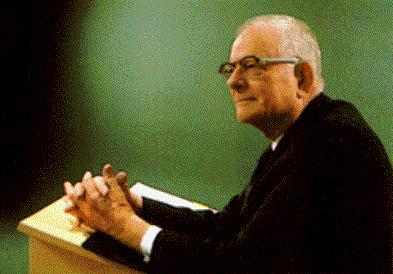 On October 14, 1900, American engineer, statistician, author, lecturer, and management consultant William Edwards Deming was born. Deming often is referred to as the father of “Total Quality Management.” After World War II, he contributed to Japan‘s economic recovery by recommending statistical methods of quality control in industrial production. His method embraced carefully tallying product defects, examining their causes, correcting the problems, and then tracking the results of these changes on subsequent product quality.

„Experience, without theory, teaches management nothing about what to do to improve quality and competitive position.“
– W. Edwards Denning

Born in Sioux City, Iowa, William Edwards Deming, the son of William Albert Deming and Pluma Irene Edwards, was raised in Polk City, Iowa on his grandfather Henry Coffin Edwards’s chicken farm. Deming received a BS in electrical engineering from the University of Wyoming at Laramie (1921), an MS from the University of Colorado (1925), and a PhD from Yale University (1928). Both graduate degrees were in mathematics and physics. He later worked at the U.S. Department of Agriculture and the Census Department.

The Statistical Control of Processes

In 1927, Deming was introduced to Walter A. Shewhart of the Bell Telephone Laboratories by C.H. Kunsman of the United States Department of Agriculture (USDA). Deming found great inspiration in the work of Shewhart, the originator of the concepts of statistical control of processes and the related technical tool of the control chart, as Deming began to move toward the application of statistical methods to industrial production and management. Shewhart’s idea of common and special causes of variation led directly to Deming’s theory of management. Deming saw that these ideas could be applied not only to manufacturing processes, but also to the processes by which enterprises are led and managed.

In the 1930s Deming became interested in ways that statistical analysis could achieve better quality control in industry. Deming’s quality-control methods were based on a systematic tallying of product defects that included the identification and analysis of their causes. Once the causes of defects were corrected, the outcomes were tracked to measure the effects of those corrections on subsequent product quality.[2]

Deming developed the sampling techniques that were used for the first time during the 1940 U.S. Census, formulating the Deming-Stephan algorithm for iterative proportional fitting in the process. During World War II, Deming worked in the compilation of the American War Standards (American Standards Association Z1.1–3 published in 1942) and taught statistical process control (SPC) techniques to workers engaged in wartime production.

In 1947, Deming was involved in early planning for the 1951 Japanese Census. The Allied powers were occupying Japan, and he was asked by the United States Department of the Army to assist with the census. He was brought over at the behest of General Douglas MacArthur, who grew frustrated at being unable to complete so much as a phone call without the line going dead due to Japan’s shattered post-war economy. While in Japan, his expertise in quality control techniques, combined with his involvement in Japanese society, brought him an invitation from the Japanese Union of Scientists and Engineers (JUSE), who had studied Shewhart’s techniques, and as part of Japan’s reconstruction efforts, they sought an expert to teach statistical control.

Deming trained hundreds of engineers, managers, and scholars in statistical process control (SPC) and concepts of quality. Deming’s message to Japan’s chief executives was that improving quality would reduce expenses while increasing productivity and market share. A number of Japanese manufacturers applied his techniques widely and experienced heretofore unheard-of levels of quality and productivity. The improved quality combined with the lowered cost created new international demand for Japanese products.

Deming declined to receive royalties from the transcripts of his 1950 lectures, so JUSE’s board of directors established the Deming Prize to repay him for his friendship and kindness. Later, from his home in Washington, D.C., Deming continued running his own consultancy business in the United States, largely unknown and unrecognized in his country of origin and work. One of the first large American corporations to seek Deming’s help was Ford Motor. Ford executives were expecting a slick presentation on tricks to improve quality. Mr. Deming, instead, insisted on questioning the company’s culture and management philosophy. Eighty-five percent of quality problems, he told them, are the result of management errors.[3] As Ford’s success became obvious, demand for Deming’s services grew. He kept his client list short and refused to have anything to do with companies not willing make top executives available to him. Among these companies were Dow Chemical, Procter & Gamble, American Telephone & Telegraph and The New York Times.[3]

A Theory of Management

In 1982, Deming’s book Quality, Productivity, and Competitive Position was published by the MIT Center for Advanced Engineering, and was renamed Out of the Crisis in 1986. In it, he offers a theory of management based on his famous 14 Points for Management. Management’s failure to plan for the future brings about loss of market, which brings about loss of jobs. Management must be judged not only by the quarterly dividend, but by innovative plans to stay in business, protect investment, ensure future dividends, and provide more jobs through improved products and services.

Deming advocated that all managers need to have what he called a System of Profound Knowledge, consisting of four parts:

Deming died in his sleep at the age of 93 in his Washington home from cancer on December 20, 1993.