You are here: Home › literature › Lewis Carroll – Mathematician and Creator of the Wonderland 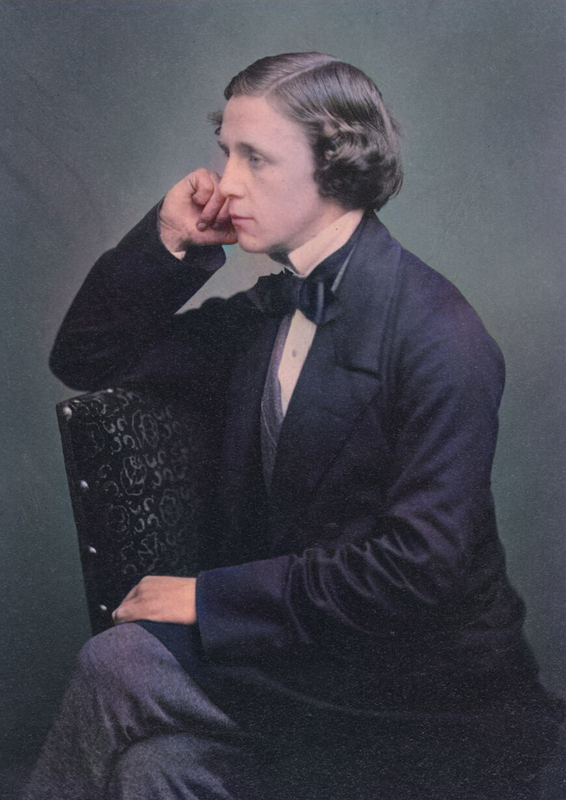 On January 27, 1832, British mathematician, photographer, and children’s book author Charles Lutwidge Dodgson, better known under his pen name Lewis Carroll, creator of the stories about ‘Alice’s Adventures in Wonderland‘, was born. With his ability for pun, logic and fantasy he managed to captivate a wide audience. His works, known as nonsense literature, have remained popular to this day and have influenced not only children’s literature, but also writers such as James Joyce, surrealists such as André Breton and the painter and sculptor Max Ernst, and cognitive scientist Douglas R. Hofstadter.

Dodgson alias Carroll came from a northern English family with Irish connections – conservative, Anglican, upper middle class – whose members chose the army and church professions typical of their class. The English all round talented Carroll was first home schooled and confronted with challenging works like ‘The Pilgrim´s Progress‘ – a Christian allegory written by John Bunyan, [13] regarded as one of the most significant works of religious English literature – from early years on. When being transferred to grammar school he could glance with his intellect as well as from the first day on when attending Oxford College. After graduating, the brilliant mathematician stayed at the Christ Church for teaching and studying. To his favored mathematical fields belonged matrix algebra, geometry, or logic. He was able to publish several mathematical books and developed Dodgson’s method (an improved voting method).

But despite his life as a mathematician, Carroll was enjoying the company of artists like Scottish poet George MacDonald or Preraphaelite painters Arthur Hughes and William Holman Hunt, influencing and motivating him to his own creative works he quickly became known for in his social circles. 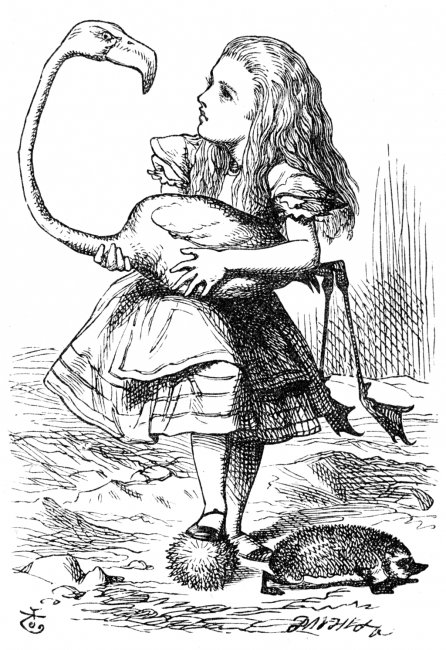 Illustration from “Alice’s Adventures in Wonderland”, “The chief difficulty Alice found at first was in managing her flamingo”. Illustration by John Tenniel, 1865.

From early years on, Carroll was fascinated by poetry and even published his own writings often with satirical and humorous content. His fame first grew when his romantic poem ‘Solitude‘ was published in 1856 and in the same year his inspirations for ‘Alice´s Adentures in Wonderland‘ began after meeting Henry Liddell at Christ Church. His family became a great part of Carroll’s life and especially his daughter, Alice Liddell evolved a good friendship with the author. On a trip with Liddell’s children, Carroll began inventing and writing down a story he would name ‘Alice´s Adventures Under Ground‘. Even though he denied it later on, it is assumed that Alice’s character in the story is leaned on Liddell’s daughter. However, his story was published in 1865 and caused instant success to the author. But Alice’s stories were not to stay his only creative success, the poem ‘The Hunting of the Snark‘ was able to increase Carroll’s fame and his photographies gained popularity as well. During his photographer career, he was able to make portraits of Alfred Lord Tennyson,[6] Michael Faraday,[7] Julia Margaret Cameron, and many more.

Lewis Carroll continued his creative works as well as his work at the Christ Church almost until his death in 1898, at age 65. His success remained after his passing and he is remembered by the lovers of his works not only for Alice’s stories, but also for poems like ‘Jabberwocky‘, one of the greatest nonsense poems ever written:

As a mathematician, Dodgson was rather conservative but certainly thorough and careful.[11] Within the academic discipline of mathematics, Dodgson worked primarily in the fields of geometry, linear and matrix algebra, mathematical logic, and recreational mathematics, producing nearly a dozen books under his real name [9]. Dodgson also developed new ideas in linear algebra (e.g., the first printed proof of the Kronecker-Capelli theorem), probability, and the study of elections (e.g., Dodgson’s method) and committees; some of this work was not published until well after his death.

His occupation as Mathematical Lecturer at Christ Church gave him some financial security. His mathematical work attracted renewed interest in the late 20th century. Martin Gardner‘s book on logic machines and diagrams and William Warren Bartley‘s posthumous publication of the second part of Carroll’s symbolic logic book have sparked a reevaluation of Carroll’s contributions to symbolic logic. Robbins’ and Rumsey’s investigation of Dodgson condensation, a method of evaluating determinants, led them to the Alternating Sign Matrix conjecture, now a theorem. The discovery in the 1990s of additional ciphers that Carroll had constructed, in addition to his “Memoria Technica“, showed that he had employed sophisticated mathematical ideas in their creation.

Dodgson died of pneumonia following influenza on 14 January 1898 at his sisters’ home, “The Chestnuts”, in Guildford. He was two weeks away from turning 66 years old.