On August 6, 1809, one of the most important English poets of the Victorian era was born, Alfred Lord Tennyson. The works of Alfred Lord Tennyson are best known for their close affinity with the English mythology and English history, they influenced the movement of the 19th century’s Victorian Art as well as the Arts and Crafts Movement, which was to join art and handcraft using simple forms applied to mostly romantic or medieval styles.

Tennyson was born in Lincolnshire, the third of eleven children of the clergyman and teacher Dr. George Tennyson. He attended school for a few years but was mostly taught by his father, himself a rector. During his time at school he was already obsessed with poetry and published his first work along with his brother. At the age of 18 he started, thanks to his wealthy aunt, studying at the Cambridge Trinity College but never finished due to the sudden death of his father. The bitter period continued as his friend passed away and the family of his fiancée dissolved the engagement because of him not being able to financially take care of a family.

However, the breakthrough was achieved when Tennyson published the poem ‘In Memoriam‘ he has worked on for 17 years, it was written in honor to his passed friendArthur Henry Hallam, with whom he had traveled  across France to the Pyrenees in 1830. Originally, they had intended to give revolutionaries who rose up against the Spanish monarchy a sum of money collected in the United Kingdom. Tennyson was so shaken that he retired completely for the next four years.

In early 1838, Tennyson and Emily Sellwood, his sister-in-law, got engaged. Since Tennyson still could not live on his literary work after two years, the Sellwood family completely withdrew their engagement. However, because of the big success of the poem could finally marry Emily Sellwood and was announced as ‘Poet Laureate‘ by Queen Victoria in 1850 after William Wordsworth‘s death.[7] From 1851 to 1853 Tennyson lived in Chapel House, Twickenham, where his son Hallam was born in 1852. Tennyson wrote Ode on the Death of the Duke of Wellington, published the same year. In 1854 he published the famous poem The Charge of the Light Brigade in memory of the brave but bloody and lossy attack of the light British cavalry brigade on a Russian artillery position in the Crimean War during the Battle of Balaklava that year. This event, which became famous through the poem, was later filmed twice. The poem was a great success and is to be seen as a reason why Tennyson became one of the best known citizens of Britain. 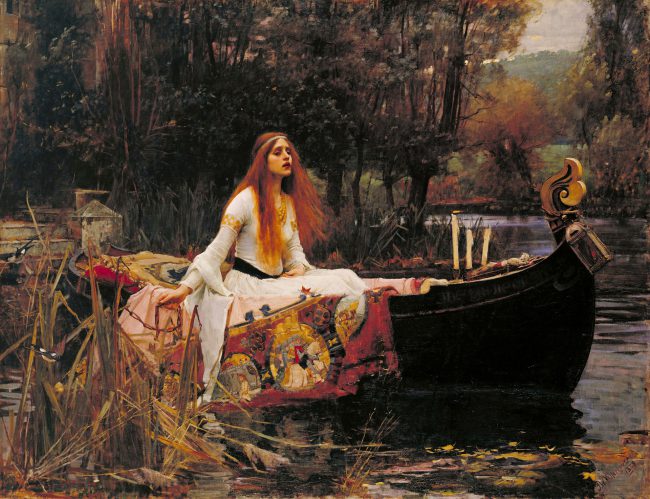 In the Garden of Swaiston

When he was 61 years old, Tennyson had to handle the death of another close friend, Sir John Simeon, who was the owner of Swaiston House. Since his friend Arthur Henry Hallam died in 1833 and his brother-in-law passed in 1855 he wrote a poem, honoring all three titled ‘In the Garden at Swaiston‘

Nightingales sang in the woods:
The Master was far away:
Nightingales warbled and sang
Of a passion that lasts but a day;
Still in the house in his coffin the Prince of courtesy lay.

Tennyson initially declined a baronetcy in 1865 and 1868, finally accepting a peerage in 1883 being the first English person to be awarded with a peering for his writing. In 1884 Victoria created him Baron Tennyson, of Aldworth in the County of Sussex and of Freshwater in the Isle of Wight. He took his seat in the House of Lords on 11 March 1884. His title was passed on to his son Hallam, who later became the governor-general of Australia. Tennyson continued writing into his eighties. He died on 6 October 1892 at Aldworth, aged 83.

Tennyson’s poems often addressed English mythology (e.g. the Arthurian legend in Idylls of the King, 1859) and history (e.g. The charge of the Light Brigade) and thus offered a wide variety of content for the Victorian art movements of the 19th century, such as the Aesthetic Movement, the Arts and Craft Movement, which later ended in Art Nouveau, and the pre-Raphaelite Brotherhood, which repeatedly addressed The Lady of Shalott in particular.

At yovisto academic video search, you can listen to one of Alfred Lord Tennyson’s most beautiful poems ‘Lady of Shallot‘, wherein Tennyson recasts Arthurian subject matter loosely based on medieval sources.