You are here: Home › architecture › Gustav Eiffel Has Gone Mad – The Construction of the Eiffel Tower 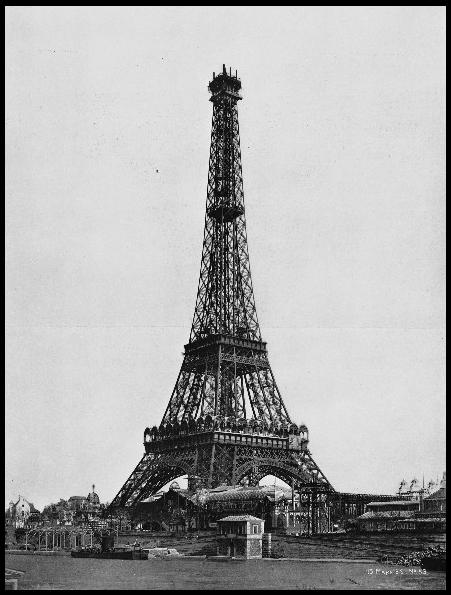 On January 28, 1887, French engineer Gustave Eiffel started construction work of his famous eponymous Tower in Paris. Finished 26 months later in March 1889 as the entrance arch to the 1889 World’s Fair, it has become both a global cultural icon of France and one of the most recognizable structures in the world. Until today, the tower is the tallest structure in Paris and the most-visited paid monument in the world; 7.1 million people ascended it in 2011.

“The first principle of architectural beauty is that the essential lines of a construction be determined by a perfect appropriateness to its use.”
— Gustave Eiffel

Marking the Centenary of the French Revolution

When plans were first unveiled to build the structure for the 1889 World’s Fair, the design was severely criticized by renown intellectuals and artists. Gustave Eiffel’s monument to mark the centenary of the French Revolution became a rather controversial subject in Parisian society. A group headed by such prominent nineteenth-century writers as Guy de Maupassant [5] and Alexandre Dumas,[4] as well as the architect of the old opera, Charles Garnier, lodged a formal complaint against the proposed plan, calling the design a disgraceful skeleton . . . “a gigantic factory chimney whose form will disfigure the architectural harmony of the city.” 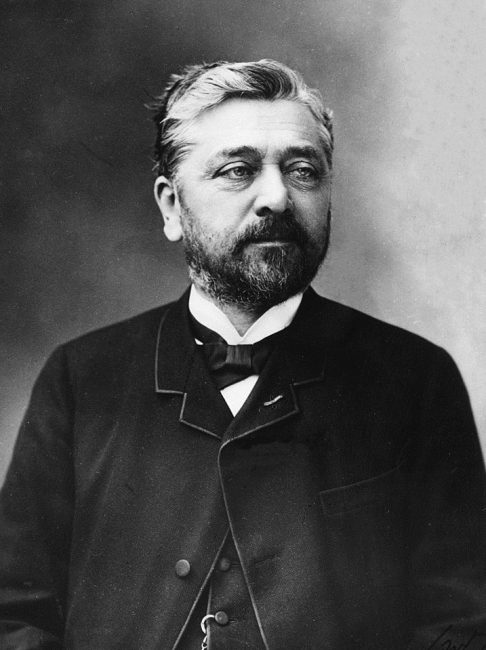 However, studies of the project began in 1884 and for the contest more than 100 artists submitted competing plans for a monument to be built on the Champ-de-Mars to serve as the world exposition’s entrance. The commission finally was granted to Eiffel et Compagnie, a consulting and construction firm owned by the acclaimed bridge builder, architect and metals expert Gustave Eiffel. While Eiffel himself often receives full credit for the monument that bears his name, it was one of his employees, a structural engineer named Maurice Koechlin, who came up with and fine-tuned the concept.

Work on the foundations started on 28 January 1887. Those for the east and south legs were straightforward, with each leg resting on four 2 m (6.6 ft) concrete slabs, one for each of the principal girders of each leg. Each of these slabs supported a block of limestone with an inclined top to bear a supporting shoe for the ironwork. The foundations were completed on 30 June, and the erection of the ironwork began. The visible work on-site was complemented by the enormous amount of exacting preparatory work that took place behind the scenes: the drawing office produced 1,700 general drawings and 3,629 detailed drawings of the 18,038 different parts needed. The task of drawing the components was complicated by the complex angles involved in the design and the degree of precision required: the position of rivet holes was specified to within 0.1 mm  and angles worked out to one second of arc. The finished components, some already riveted together into sub-assemblies, arrived on horse-drawn carts from a factory in the nearby Parisian suburb of Levallois-Perret and were first bolted together, with the bolts being replaced with rivets as construction progressed.

At first the legs were constructed as cantilevers, but about halfway to the first level, construction was paused in order to create a substantial timber scaffold. This renewed concerns about the structural integrity of the tower, and sensational headlines such as “Eiffel Suicide!” and “Gustave Eiffel Has Gone Mad: He Has Been Confined in an Asylum” appeared in the tabloid press. However, the critical stage of joining the legs at the first level was completed by the end of March 1888. Although the metalwork had been prepared with the utmost attention to detail, provision had been made to carry out small adjustments in order to precisely align the legs; hydraulic jacks were fitted to the shoes at the base of each leg, capable of exerting a force of 800 tonnes, and the legs were intentionally constructed at a slightly steeper angle than necessary, being supported by sandboxes on the scaffold. Although construction involved 300 on-site employees, only one person died thanks to Eiffel’s stringent safety precautions and the use of movable gangways, guardrails and screens.

When the tower opened to the public in May, 1889, it was an instant success. Eiffel was able to reimburse his creditors within one year, just through the admission ticket receipts from the 1,868,000 visitors. Tickets cost 2 francs for the first level, 3 for the second and 5 for the top, with half-price admission on Sundays. Twenty years later, however, the lease for the land expired, and Eiffel lost control of his tower to the City of Paris. The land was too valuable for such a frivolous structure, according to city council, and plans were made to turn the tower into scrap metal. This also happened to all the other iron buildings built for the exposition. Fortunately for the Eiffel Tower, the First World War came along, and the tower was transformed into a military radio and telegraph centre. In the opening weeks of the First World War, powerful radio transmitters were fitted to the tower in order to jam German communications. This seriously hindered their advance on Paris, and contributed to the Allied victory at the First Battle of the Marne. Thus, the tower’s lease was renewed for another 70 years, and the tourists continued to flock to the structure.

Actually, the Eiffel Tower remained the highest building on earth until 1930 the Chrysler Building in New York was erected. From the ground to the flagpole its height was 312,27 meters in 1889, whereas it is today, 324 meters high with antennae. The height of the Eiffel Tower varies by 15 cm due to temperature.Different French television companies install their antennae right on top of the tower. The tower is built from puddled iron erected with a crossbar system made of 18.038 pieces and fixed with 2.500.000 rivets. Despite its size, the tower only weighs 7,300 tons. If you ever visit Paris and decide to climb the Eiffel tower by foot, you will have to conquer 1665 steps. Maintenance of the tower includes applying 50 to 60 tonnes of paint every seven years to protect it from rust. Overall, more than 200,000,000 people have already visited the tower since its construction in 1889.